The New York route on the Triple Crown trail includes the $200,000 Gotham Stakes (G3) at Aqueduct, the main local prep for the Wood Memorial and ultimately the Kentucky Derby. A field of 9 three-year-olds went to post in this 1 1/16-mile trip around two turns of the inner dirt track, before an on-track crowd of 4,148. Whirlaway Stakes winner Summer Doldrums was sent off as the 6-5 favorite over 2-1 second choice Cowtown Cat, shipping in from Florida off his third place finish in the Swale Stakes.

19-1 shot Wollaston Bay battled on the front end with 13-1 Wafi City through a quarter in 24.54 and a half in 49.57, while favorite Summer Doldrums stalked the pace in third on the outside, and Cowtown Cat tracked him in fourth along the rail. Turning for home, Wollaston Bay faded from contention, allowing Wafi City to lead the field into the stretch. Wafi City was 1 1/2 lengths clear at the 1/8 pole, but Cowtown Cat was making headway late. Cowtown Cat easily shook off Summer Doldrums at the 3/16 pole and was all-out late to draw clear of Wafi City by 2 1/2 lengths at the line, completing the trip in 1:44.75 over a fast surface. Summer Doldrums also put in a late charge but finished third, a head back of Wafi City.

The race prior to the Gotham was the Toboggan Handicap (G3) for the sprinter. Results and photos for that race are below. 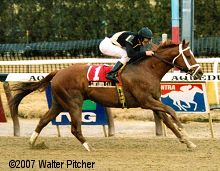 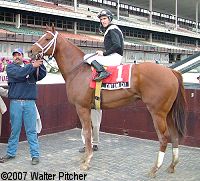 Cowtown Cat in the winner's circle. Winning trainer Todd Pletcher said, "I liked his race. He relaxed beautifully, had no trouble shooting through a tough spot and finished well. He looked like a horse that wanted to stretch out. Seth (Benzel, assistant) said the colt looked good. I spoke with (owner WinStar Farm's) Elliott Walden this morning and I'll also get the Gulf Coast people together to figure out what we're going to do next. The Wood is certainly a possibility. The main thing is that it is four weeks out (from the Kentucky Derby). I like that extra week." 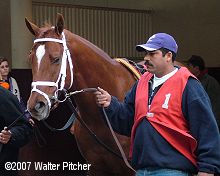 Cowtown Cat in the paddock before the race. Winning jockey Ramon Dominguez added, "He was very willing to go through that hole. I had to go between (Summer Doldrums) and (Wollaston Bay). He was very brave. Up to that point, he was so relaxed, I had no idea whether he was going to stop or go on. I put him on the bit, and he split horses beautifully. He finished real nicely. I was very pleased with him. Judging by today, it seems like he'll go farther. I had to get the outrider to get him pulled up. That's always a good sign." 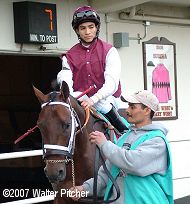 Second place finisher Wafi City before the race. His trainer Kiaran McLaughlin said, "He ran very well. We're very happy with the race. Alan (Garcia) rode a great race from the nine-hole to get him inside and save ground. He got a touch tired and maybe the race was a touch too long. I'm not sure what we're going to do now, I'll talk to over with (owners) the Darley people." 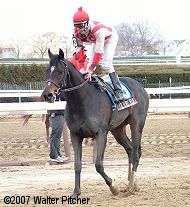 Third place finisher and beaten favorite Summer Doldrums returns after the race. His trainer Rick Violette Jr. said, "It wasn't a great trip. There wasn't as much speed as we thought there would be. I'm a little disappointed. I was afraid that this could happen off his big race last time. Hopefully, that means we're supposed to move forward when we get to the Wood. We knew going in that it wasn't going to be his A-race, but I still thought he was going to get it done." The next day Violette said that Summer Doldrums "scoped dirty. It was like cottage cheese crud in his lungs. Other than that he's fine. I figured he would bounce off the Whirlaway and when you combine that with the crud in his lungs, he ran the way he should. This will set him up nicely for the Wood." 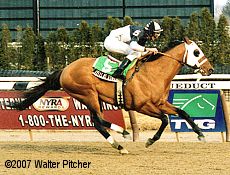 On the undercard of the Gotham was the $100,000 Toboggan Handicap (G3), a 6 furlong sprint on the inner track for older horses. 1-2 favorite Attila's Storm ran as expected, taking over the lead midway around the turn, and then drawing away to a 3 length lead at the 1/8 pole, easily holding off the late charge of 7-1 Wild Jam late to prevail by 1 1/4 lengths in a time of 1:10.02. It was another 2 1/2 lengths back to 8-1 Pavo in third. 7-2 second choice Kelp was quickest in the first quarter mile but had nothing for the stretch run and was last.
Results Chart from DRF. 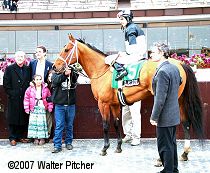 Attila's Storm in the winner's circle. Winning trainer Richard Schosberg said, "I knew the 2-horse (Kelp) had a lot of speed. I was pleased to see our horse break the way he did. Ramon (Dominguez) rode the best race he possibly could, considering what was happening with the 2-horse. (Kelp) was drifting out every step of the way and we were in the five or six path before we got to the turn. I'm not going to worry about the final time too much; he persevered after a half of (44.28). He actually held off a pretty nice horse who likes this track. I don't think there's a horse on the grounds that deserved a stakes win more than him. Physically, he's fine. We'll take a look at the Carter. If he's training well and okay we'd like to run." 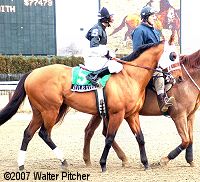 Attilla's Storm in the post parade. Winning jockey Ramon Dominguez added, "I committed myself because Coa (jockey Eibar Coa aboard Kelp) was the only other speed in the race. His horse was starting to get out pretty badly, but by that time, it was too late; I wasn't going to take back and go inside. I was committed to sitting outside and I knew the fractions were suicidal. I was definitely nervous the last 1/16. He had run so fast and was getting tired. He showed his class."