The major local prep for the Wood Memorial is the $200,000 Gotham Stakes (G3) at Aqueduct with the winner getting a free nomination to the Wood. Ten Triple Crown hopefuls went to post in this 1 1/16 mile event over the inner dirt track, with Whirlaway Stakes winner Achilles of Troy sent off as the 3-2 favorite over Hutcheson Stakes winner Keyed Entry at 8-5. Undefeated Sweetnorthernsaint shipped in from his Maryland base off his win in the Miracle Wood Stakes and was the 4-1 third choice.

When the gate opened, the favorite Achilles of Troy stumbled and was slowest away, while Fred Capossela Stakes winner and 36-1 outsider Like Now went straight to the front and jockey Fernando Jara had him 3 lengths clear after the initial 1/4 mile in 23.25. Edgar Prado settled Keyed Entry off the pace as Like Now held the lead through the backstretch, getting the half in 47.78 and 3/4 in 1:12.30. Through the stretch, Keyed Entry responded upon asking but Like Now had plenty left to hold him off for the neck victory in 1:43.17 for the 1 1/16 miles over the fast track. It was just 1/2 a length back to Sweetnorthernsaint in third and another 1/2 length to 17-1 shot Greeley's Legacy in fourth. Favored Achilles of Troy raced in mid-pack the whole way and showed nothing when asked in the stretch, finishing fifth. Jockey Ramon Dominguez pulled him up on the clubhouse turn after the race and he was vanned off.
Results Chart from DRF.

The race prior to the Gotham was the Cicada (G3) for the 3-year-old fillies. Results and photos for that race are below.

A side on view of the finish where you can see the distance between the horses a bit easier. 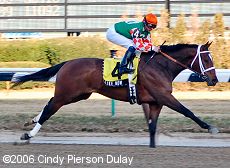 Like Now leads as they pass by the first time. Winning jockey Fernando Jara said, "I was not surprised I was all alone on the front. I knew the kind of horse I had and he's a very good horse. I knew that (Keyed Entry) was the horse to beat coming into the race. I was just so comfortable with my horse and he responded gamely. I knew I had a lot of horse left. He is getting better and better with each race and I hope he goes to the Kentucky Derby and he wins." This was the first Gotham win for both Jara and McLaughlin. 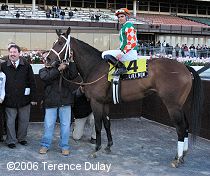 Like Now in the winner's circle with trainer Kiaran McLaughlin on the left. McLaughlin said, "We thought he would be successful stretching out, but you never know until you try. This was a tough spot to try. The last time he ran, the outrider had to pull him up, so we thought he would get the distance. I thought we would out-break (Keyed Entry) and beat him to the first turn, and that was important. If he wanted to go past us, it looked like Edgar (Prado) had the horse to past us, but he decided to sit off of us. He's a smallish home-bred and the people let us put him where we thought he could win. He's a sound horse and he's never missed a day of trainer and Jules is not a sprint sire." McLaughlin said that Like Now would start next in the Wood Memorial. 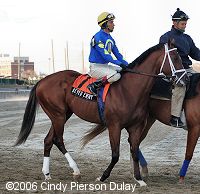 Second place finisher Keyed Entry in the post parade. Seth Benzel, assistant to trainer Todd Pletcher, said, "This sets him up nicely for the Wood, if that's what Todd wants to do. We came in today with a question of whether or not he could rate or how he could take two turns, and he answered a lot of those questions. It's always nicer to come back with a win, but leading up to a race like the Kentucky Derby, a win isn't always the most important thing." Jockey Edgar Prado added, "He rated beautifully and he took good position and then when I called on him, he responded, but the horse in front of me had something left. The most important thing is that he raced very kind and finished strong. He has a lot of potential and he should improve." 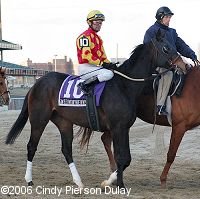 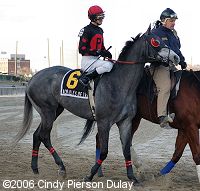 Beaten favorite and fifth place finisher Achilles of Troy in the post parade. His jockey Ramon Dominguez said, "He completely missed the break and after that, the trip wasn't much smoother. He checked entering the backside, but I don't know whether that was a combination of having a bad trip and also the way horse came back. I was concerned from the get-go because after breaking bad, he was picking it up on the backside and when I raced to the 3/8 pole, I realized it was going to take more than he was giving me." Dr. Anthony Verderosa, Chief Examining Veterinarian of the New York Racing Association, said, "He seemed a little sore in his right-front. We'll check on him tomorrow morning and talk to their vets. At this point, there was nothing we could see or feel." 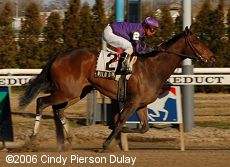 On the undercard was the Cicada Stakes (G3) for 3-year-old fillies. A field of seven sprinted 6 furlongs on the inner dirt for a $100,000 purse. 2-1 favorite Celestial Legend was 1 1/2 lengths clear of the field through fractions of 22.74 and 45.88, but at the top of the stretch, 5-2 second choice Wild Gams, who had stalked the pace in 3rd down the backstretch, split horses and powered away to a 3 1/2 length win over the favorite in a time of 1:09.66. It was 2 1/2 lengths back to Oprah Winney in third.
Results Chart from DRF. 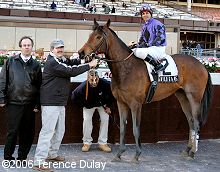 Wild Gams in the winner's circle. Winning jockey Eibar Coa said, "She actually did better today than her previous two victories. Today, she ran against better horses and she proved she has been improving. Today, I was very happy with the way she ran. The last two times, she was in better position than she was today because today she was stuck inside and I had to wait. But when I pointed her, she just responded and that was good." Trainer Ben Perkins Jr. said, "We were sitting in a good spot. I said to Eibar (Coa), `Whatever you do, don't come off the fence.' I thought he had a good hold on her. When she started moving up, I knew she had a good kick. It looked like maybe we could stretch her out another notch or two. There are some nice races here, so I'm not sure we'll have to ship around." 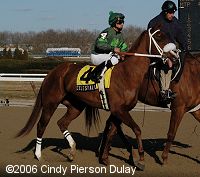 Second place finisher and beaten favorite Celestial Legend in the post parade. Her trainer Dale Capuano said, "She ran great; we just got out-run. She ran as good as she can run. She's pretty quick, so when she broke well, I Erick Rodriguez added, "She tried very hard. We tried to win the race, but she was just second-best. She ran some fast early fractions, but the filly that beat her is really good. She really tried, but she just couldn't be the winner today."