The feature race on Sunday at Santa Anita was the $200,000 Goldikova Stakes (G2) for older fillies and amres going 1 mile on the turf. Conditions were typical for mid October with cloudy skies and temperatures in the high 60's and the course rated firm. A field of 7 made final entry with John C. Mabee Stakes (G2) winner Raymundos Secret sent off as the even-money favorite. In to challenge her included 5-2 second choice Maxim Rate, 2nd in the Rodeo Drive (G1) last out, and 13-2 third choice Tonahutu, 2nd in the Yellow Ribbon (G2) but 4th in the Rodeo Drive.

Jockey Flavien Prat sent Raymundos Secret to the lead first time by after stumbling at the break, and she set fractions of 22.79, 46.20, and 1:09.92 while pressed by Tonahutu and stalked by 7-1 Atomic Blonde and 29-1 longest shot Hang a Star. Turning for home, Raymundos Secret tired as Maxim Rate, 5th early under Umberto Rispoli, swept 3 wide to the lead through 7f in 1:21.91. Kept to task by Rispoli, Maxim Rate drew off to win by 2 1/2 lengths over late-running 21-1 Zee Drop in 1:33.85. It was another length back to Tonahutu third, and 1/2 more to favorite Raymundos Secret fourth. 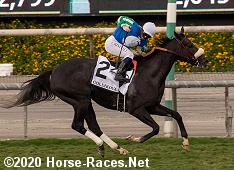 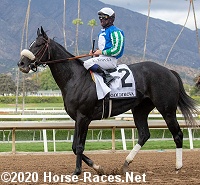 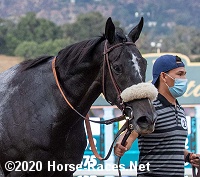 Left: Maxim Rate in the winner's circle. Winning owner Nick Cosato said, "Without a doubt this was her best race to date. The goal was to run in the Matriarch, but Simon came to me and said this filly is doing too good, we have to run her. That's pretty impressive. When you give a trainer the latitude to wait and they urge you to run in a race that you hadn't originally intended to run, it says a lot. It's great to win this and the goal is still to run in the Matriarch, the timing is good."

Right: Maxim Rate heads back to the barn after the race. Winning trainer Simon Callaghan said, "She was always a very good filly, won her first time out and then she just plateaued a little bit as a three-year-old, so we gave her some time off. Thankfully the owners were really patient with her and that really helped her develop. I think she definitely is a better filly now, but I honestly think there's more scope for improvement. Obviously a very exciting filly for the future." 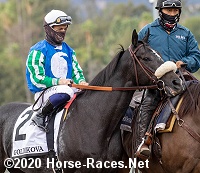 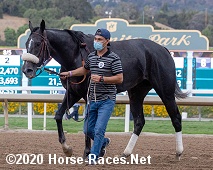 Left: Maxim Rate in the post parade. Winning jockey Umberto Rispoli said, "I think she has no problem with the distance. I think Simon knows what he is doing. We know that she can go further in the distance and that's why I wasn't afraid to go a mile and three wide."

Right: Maxim Rate after the race. Rispoli added, "Everybody knows I like to save ground but that was not the case. I knew that she could go further, and she responded really well. When she took the lead she kind of pulled her self up a little bit but she's definitely improving and I think she still can improve." 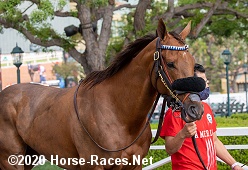 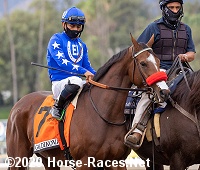 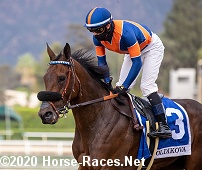 Fourth place finisher and beaten favorite Raymundos Secret returns after the race. The Phil D'Amato trainee has a record of 5 wins, 0 seconds, and 0 thirds in 8 starts, earning $200,971 for owners Sierra Racing and Sterling Stables. 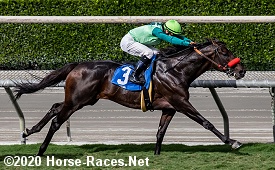 Four races before the Goldikova Stakes, a field of 5 older horses contested the $70,000 Lure Stakes also at 1 mile on the turf. 2019 Queen's Plate winner One Bad Boy was sent off as the 6-5 favorite off a 4th place finish in a Del Mar allowance. In to challenge him included 7-2 second choice Murad Khan, 3rd in the Wickerr at Del Mar, and 11-2 third choice Majestic Eagle, 5th in the City of Hope Mile (G2). 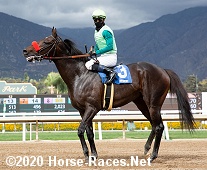 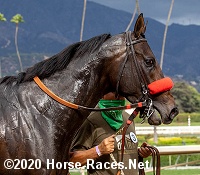 Left: One Bad Boy in the winner's circle. Winning trainer Richard Baltas said, "He's a free running horse who has a lot of talent. He had to overcome a physical issue, so he's had a long time off and he was working really, really well coming into this race. Flavien worked him the last couple of times and he was kind of in love with him so I felt confident today that the horse would run well. He's actually pretty good around the barn but when he's ready to run he'll start pawing and start acting up a little bit. I tried to pet him and he wanted no part of it, in the Paddock he was just jumping up and down, so I said, let's just (saddle him) on the walk, I don't want to get him upset."

Right: One Bad Boy returns to the barn. Winning jockey Flavien Prat said, "He was going along effortlessly, but we got no breaks. They were on top of me the whole race. He's getting really good again, as you can see. He fought those horses off and showed a lot of heart. We've always thought he was a good horse."