The feature race at Aqueduct on Black Friday was the $300,000 Go for Wand Handicap (G2), the distaff counterpart of the Cigar Mile (G1) to be run Saturday. A field of 7 older fillies and mares went 1 mile around one turn of the main track, under sunny skies and temperatures in the low 40's. Centring was sent off as the 5-2 favorite off her close second in the Turnback the Alarm Handicap (G3) after finishing third in the Beldame Invitational (G1). In to challenge her included 3-1 second choice My Pal Chrisy, winner of the Musical Romance and the Millions Distaff Preview, both at Gulfstream against Florida-breds, and 4-1 third choice Willet, second in the Iroquois after winning the Princess Dixie, both at Belmont against New York-breds.

Jockey Irad Ortiz Jr. sent 9-2 fourth choice Fantasy of Flight to the lead exiting the chute and she set fractions of 24.59, 48.20, and 1:12.61, while pressed by 22-1 Ol Donyo and stalked by 13-1 Royal Lahaina. Entering the stretch, jockey Jose Ortiz sent Royal Lahaina to the lead, opening up a 2 length lead at the 1/8 pole. Centring, sixth early under jockey Rajiv Maragh, put in a belated rally but Royal Lahaina cruised under the line 2 1/2 lengths in front in 1:36.56 over the fast track. It was just a neck back to My Pal Chrisy third. 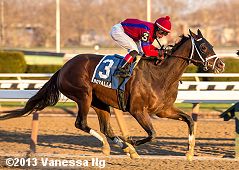 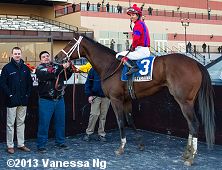 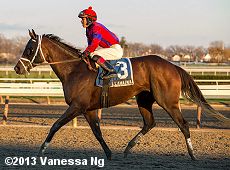 Left: Royal Lahaina in the winner's circle. Mike McCarthy, assistant to winning trainer Todd Pletcher said, "She'd been keeping some heady company. She'd trained well the past couple of weeks and she certainly has an affinity for Aqueduct. Jose gave her a super ride. Things shook out nicely for them." 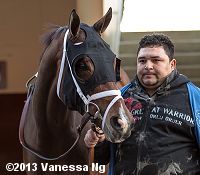 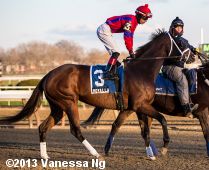 Left: Royal Lahaina in the paddock before the race. Jockey Jose Ortiz said, "She broke very well and I was able to get perfect position on the outside. At the 3/8 pole I knew I had a lot of horse so I just waited a little bit. When I asked her to go, she did." 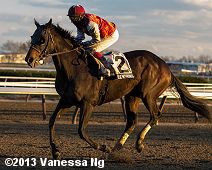 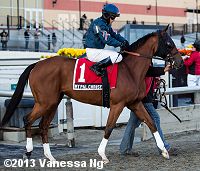 Left: Second place finisher and beaten favorite Centring returns after the race. Jockey Rajiv Maragh said, "The distance is a little shorter than her best distance. I wanted to keep her six lengths behind; those were my instructions. Tom wanted me to settle in and come running." Trainer Tom Albertrani added, "She finished up nicely; it was a little short. She's always right there. One of these days, we'll crack with her."

Right: Third place finisher My Pal Chrisy heads out for the post parade. The 3-1 second choice raced in fourth early under jockey Javier Castellano, then pased the tired pacesetter to get third beaten 2 3/4 lengths. The Marty Wolfson trainee improved her record to 11 wins, 5 seconds, and 8 thirds in 42 starts, earning $741,168 for owner Farnsworth Stables.