The feature race on Sunday at Del Mar was the $100,000 Generous Portion Stakes for 2-year-old California-bred or sired fillies going six furlongs on the main track. Conditions were typical for the seaside track in late August with sunny skies and temperatures in the mid 70's. After 1 scratch a field of 6 went to post with I'm So Anna sent off as the 11-10 favorite off her maiden win at second sking at Los Alamitos. In to challenge her included 5-2 second choice and undefeated Governor Goteven off her win in the California Thoroughbred Breeders Association Stakes, and 3-1 third choice Big Andy, still winless and second last out in the California Thoroughbred Breeders Association Stakes.

Jockey Tiago Pereira sent Governor Goteven to the lead exiting the chute through an opening quarter of 21.96 while pressed by 10-1 Emma's Dance and salked by 18-1 Do You Hear That. On the far turn, Emma's Dance gained a short lead through a half in 45.79 before tiring, allowing Governor Goteven to regain the front through 5f in 58.75. Favorite I'm So Anna, 5th early under Flavien Prat, put in a 2 wide rally late to no avail as Governor Goteven drew off in the stretch to win going away by 4 1/2 lengths in 1:12.21. It was another 1/2 length back to Big Andy third. 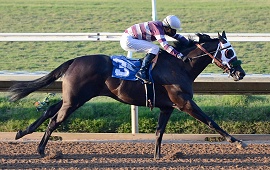 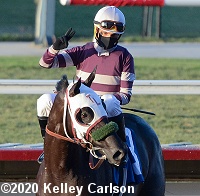 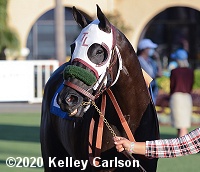 Left: Governor Goteven in the "winner's circle". Winning trainer Lisa Bernard said, "I was feeling a lot of nerves (during the race). But I trust this filly and she has been training awesome. We had high expectations, but you don't know until they prove themselves out there, especially with 2-year-olds. In her daily training you can see she wants to run. It's in her blood. That's what she wants to do. It definitely is a dream come true. There's no words to describe it."

Right: Governor Goteven in the paddock. Winning jockey Tiago Pereira said, "Lisa said get a good spot with her. She broke really well and we were in a good spot right from the start. I was taking pressure, but she was OK with it. Then she just started to pull away. She'd been training well for this. She's a nice filly." 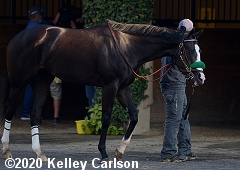 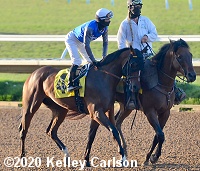 Left: Second place finisher and beaten favorite I'm So Anna in the paddock before the race. The Steve Sherman trainee improved her record to 1 win, 1 second, and 1 third in 3 starts, earning $47,680 for owner-breeder KMN Racing.