The $150,000 Gallant Bloom Handicap (G2) at Belmont Park features some of the best female sprinters of the east coast, contested under sunny skies and temperatures in the mid 60's before just 5,972 fans. Only 5 made final entry but after Sugar Swirl scratched, just 4 went postward in this 6 1/2 furlong main track feature. As expected, multiple Grade 1 winner and last year's champion juvenile filly Indian Blessing was sent off as the 3-10 choice, coming into the race off two consecutive runaway victories in the Prioress at Belmont in July, and then the Test at Saratoga in August. In to challenge the Bob Baffert stable star were 3-1 second choice Elope, undefeated in two starts so far in her career and making her stakes debut, 8-1 third choice Zada Belle, winner of the Bennington at Saratoga last out, and 11-1 Porte Bonheur, winner of the Flanders and the Victory Ride in her last 2 starts.

Zada Belle was quickest out of the gate under jockey Eibar Coa and she led for the first quarter mile in 22.70, before Indian Blessing, under new jockey Corey Nakatani, took over nearing the end of the backstretch getting the half in 45.09. Elope stalked them in third early. Zada Belle tired on the turn to eventually finish last, allowing Indian Blessing to open a 3 length advantage on Elope in midstretch. Indian Blessing drew away in the final furling to cruise under the line 6 1/4 lengths in front, completing the 6 1/2 furlong trip in 1:16.24 over the fast main track. It was another 5 lengths back to Porte Bonheur third, and 1 1/4 more to Zada Belle last. 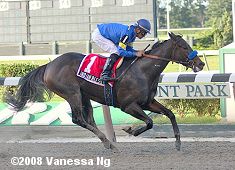 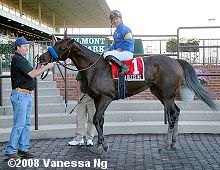 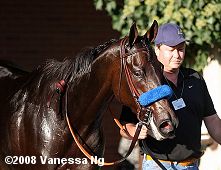 Right: Indian Blessing heads back to the barn after the race. Tonja Terranova, New York stable manager for winning trainer Bob Baffert said, "She's just been doing incredible. She's been so relaxed. She's been so willing (to do) anything that the rider wants. We've been very happy with her. She's a champion and a dream to be around." 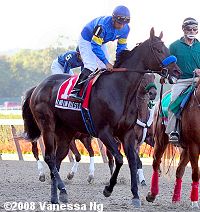 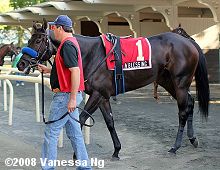 Left: Indian Blessing in the post parade. Winning jockey Corey Nakatani, celebrating his third win on the card, said, "She broke really good, I sat there and I was biding my time. I was pretty patient waiting to call on her turning for home. I called on her, and she kicked away and did what she had to do to win. It's like driving a Ferrari. I spoke with Bob (Baffert) in California the other day and he just said, 'Be patient.' He said that Coa's horse (Zada Belle) would try to drift out a little bit, and so just sneak up on the inside and let her do her thing. I said, 'OK, no problem.' I've been waiting for this."

Right: Indian Blessing in the paddock before the race. 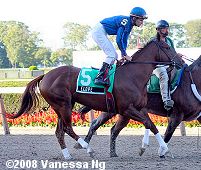 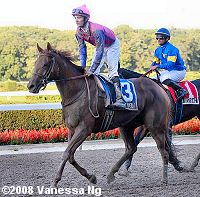 Left: Second place finisher Elope in the post parade. The 3-1 second choice was reserved back in third on the outside under jockey Ramon Dominguez, came three wide into the stretch while passing the tiring Zada Belle, and finished well to hold second beaten 6 1/4 lengths. The Bruce Levine trainee improved her record to 2 wins and 1 second in 3 career starts, earning $83,930 for owner-breeder Peter E. Blum Racing LLC.

Right: Third place finisher Porte Bonheur returns after the race. The 11-1 fourth choice raced on the rail in last down the backstretch under new jockey Eibar Coa, was very wide into the stretch, and lacked any late rally to finish third. The David Duggan trainee improved her record to 4 wins, 0 seconds, and 2 thirds in 8 career starts, earning $218,366 for owner Johanna Murphy-Leopoldsberger.


On the undercard, a field of six 3-year-old fillies contested the $75,000 Missile Belle Stakes at 7 furlongs on the main track. Informed Decision, third in the Victory Ride last out, was the 7-5 favorite over 2-1 Tar Heel Mom, coming into the race off 2 straight wins and making her stakes debut. 25-1 longest shot Overandabeauty battled on the front end with 9-2 third choice Spritely through a quarter in 22.62 and a half in 45.41 over the fast track. Turning for home, Overandabeauty tired and faded to last, as Tar Heel Mom, who stalked the pacesetters in third, moved up to take the lead at the 3/16 pole, getting 3/4 in 1:10.40. Informed Decision, fourth and out wide the whole way, closed with a rush late to run right by Tar Heel Mom inside the 1/8 pole to win going away by 1 3/4 lengths in 1:23.89. It was just a head back to Spritely third.
Results Chart 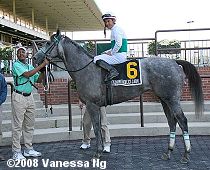 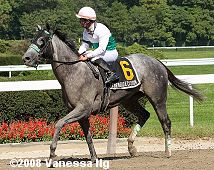 Left: Informed Decision in the winner's circle. Jockey Corey Nakatani swept both stakes races and won three of the 10 races on Saturday afternoon at Belmont. Informed Decision, a grey daughter of Monarchos trained by Jonathan Sheppard, improved her record to 4 wins, 0 seconds, and 1 third in 6 starts, earning $150,587 for owner Augustin Stables. 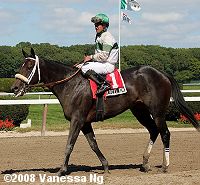