The feature race on the first Sunday of the Santa Anita winter-spring meeting was the $100,000 Robert J. Frankel Stakes (G3) for older fillies and mares going 1 1/8 miles on the turf. Conditions were excellent with sunny skies and temperatures in the mid 60's. Miss Teheran was sent off as the 5-2 favorite in the field of 8 off her 5th place finish in the Forever Together Stakes at Aqueduct. In to challenge her included 3-1 second choice Mucho Unusual, 10th in the Breeders' Cup Filly and Mare Turf (G1) after winning the Rodeo Drive (G1), and 4-1 third choice She's Our Charm, 7th in the Matriarch (G1).

Jockey Juan Hernandez sent She's Our Charm to the lead first time by and she set fractions of 23.72 and 47.90 while pressed by Mucho Unusual and stalked by 23-1 Colonial Creed. On the far turn favorite Miss Teheran and jockey Joel Rosario swept to the front through 3/4 in 1:11.70. Turning for home, Mucho Unusual was moved 3 wide by John Velazquez and she collared the tiring favorite midstretch through 1 mile in 1:35.02. Kept to task by Velazquez, Mucho Unusual held off late-running 32-1 longest shot Never Be Enough to win by 3/4 length in 1:46.94. It was a nose back to She's Our Charm third, and 3/4 more to Miss Teheran fourth. 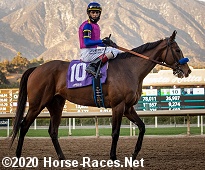 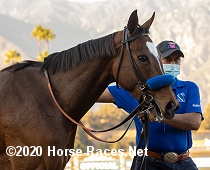 Left: Mucho Unusual in the winner's circle. Winning trainer Tim Yakteen said, "(I had) pretty high (expectations), she had been straightforward. We had an outside draw that was a little bit of a concern. There was lone speed in the race. She is such a dream to train, so easy, so straightforward she makes my job easy. She's my queen. We don't have a big stable but she's our queen. We try to space her races out. We haven't made any plans. Maybe the Megahertz will be in the play, or not, we'll consider everything and just play it by ear. It is so great to win these races named in honor of all these great trainers, its an honor to be in the Winner's Circle in this race."

Right: Mucho Unusual heads back to the barn after the race. Winning jockey John Velazquez said, "She broke good, and it looked like the one speed filly (number two, She's Our Charm) would go and she did. Down the backside, Joel (Rosario aboard Miss Teheran) moved a little early and I also wanted to make sure I put a little pressure on the two because she had been running easily. Turning for home, I asked her and she finished up great." 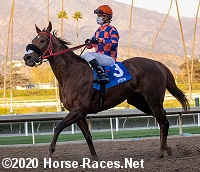 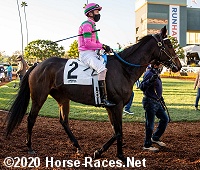 Left: Second place finisher Never Be Enough returns after the race. The Manuel Badilla trainee improved her record to 7 wins, 5 seconds, and 7 thirds in 29 starts, earning $167,925 for owners Ronald Charles and Samuel Gordon.

Right: Third place finisher She's Our Charm in the paddock before the race. The Ron McAnally trainee improved her record to 3 wins, 1 second, and 2 thirds in 10 starts, earning $143,298 for owner-breeder Deborah McAnally Trust.

Jockey John Velazquez sent Commander Khai to the lead first time by and he set fractions of 22.59, 45.74, and 1:09.51 while pressed by Beer can Man and stalked by 5-1 fifth choice Big Fish. Entering the stretch, Commander Khai opened up a 1 1/2 length lead through 7f in 1:21.55, but 4-1 fourth choice Cathkin Peak, 6th early under Flavien Prat, came out for room and rallied by to win by 1 length in 1:33.80. It was another 2 3/4 lengths back to Beer Can Man third. Favorite Ebeko was slowest out of the gate, trailed throughout, and fell at the 3/16 pole unseating jockey Joel Rosario. Sadly, Ebeko was euthanized after being vanned back to the barn, having suffered a catastrophic injury to his left foreleg. 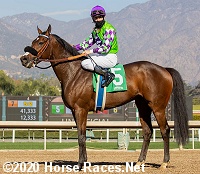 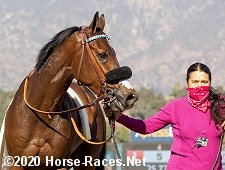 Left: Cathkin Peak in the winner's circle. Winning trainer Phil D'Amato said, "He's such a neat horse. Ever since he arrived (from Ireland), he hasn't done anything wrong and he keeps getting better and better. Flavien seems to fit him like a glove."

Right: Cathkin Peak heads back to the barn after the race. 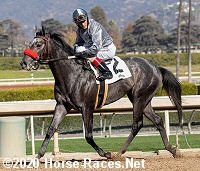 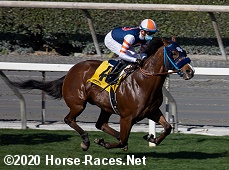 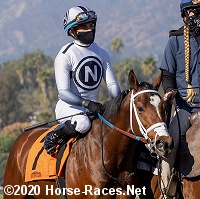 Beaten favorite Ebeko in the post parade. Sadly, he did not finish the race after breaking down at the top of the lane and had to be euthanized. The Peter Miller trainee has a record of 2 wins, 2 seconds, and 0 thirds in 8 starts, earning $122,930 for owners Altamira Racing Stable, CYBT, Marc Lantzman, and Michael Nentwig.