The third-richest race contested at Churchill Downs after the Kentucky Derby and Oaks is the $400,000 Stephen Foster Handicap (G1), featuring some of the top older horses in the country going 1 1/8 miles over the main track. For the first time the race was run at night, under cloudy skies and temperatures in the 80's. Wise Dan was sent off as the 9-10 favorite in the field of 8, off a 3 race winning streak including the Fayette (G2), Clark (G1), and Ben Ali (G3). In to challenge him included 6-1 second choice Nehro, second in the Pimlico Special (G3) last out, and 7-1 third choice Fort Larned, off a second place finish in the Alysheba (G2).

Jockey Miguel Mena sent 14-1 Nates Mineshaft to the lead and he set fractions of 23.66, 47.27, and 1:10.95 over the fast track whilw as many as 2 lengths in front of Wise Dan and Fort Larned stalking him second and third. Entering the stretch, Nates Mineshaft held the lead, getting the mile in 1:36.33, but 9-1 Ron the Greek, along the rail, and Wise Dan, to the outside, gained on the pacesetter through the final furlong. Ron the Greek outfinished Wise Dan by a head in 1:50.51. It was just 3/4 lengths back to Nates Mineshaft third. 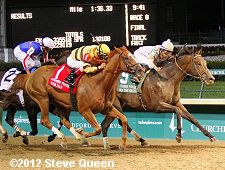 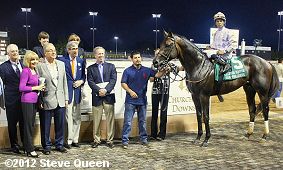 Ron the Greek in the winner's circle. Trainer Bill Mott said, "There was a good pace in here. More than there was in the Oaklawn Handicap. Jose did a great job and was able to find a seam on the rail. He seems like he's an improving horse and you'd have to say he's one of the top handicap horses in the country. It was a very good field tonight and I feel proud of our horse that he was able to beat such a good field. We'll probably give him a break now and point for the Jockey Club Gold Cup and then the Breeders' Cup Classic. He might have a race before the Gold Cup, but I'm not sure where it would be." 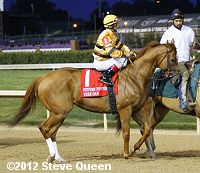 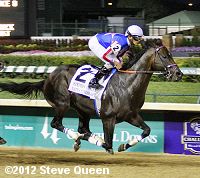 Left: Second place finisher Wise Dan in the post parade. Trainer Charles Lopresti said, "Johnny said he was concentrating on putting (Nates Mineshaft) away. He put the other horse away, but he never saw that horse (Ron the Greek) coming. He thought he had it won and he just never saw the horse coming. That's taking nothing away from that horse." Jockey John Velazquez added, "He moved well at the 3/8 pole and felt good coming into the stretch. He got to the leader, but he kind of re-broke while the other horse (Ron the Greek) got through on the inside. I thought we had the leader, but he never saw that horse on the inside."

Right: Third place finisher Nates Mineshaft as they go by the first time. Jockey Miguel Mena said, "I was pretty excited when I turned for home. I had a lot of horse. We made the lead and that was kind of what I wanted to do. He seems like his heart gets bigger and turning for home I had a lot of horse, but he just got a little short at the end. He ran a great race. I thought I was a winner but when he hit the 1/16 pole he started getting a little tired. I kept riding him hard, but he was tired." 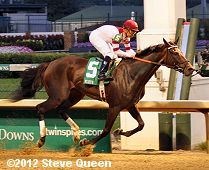 The distaff counterpart to the Stephen Foster is the $200,000 Fleur de Lis Handicap (G2) for older fillies and mares going 1 1/8 miles on the main track. As expected, Breeders' Cup Ladies' Classic (G1) winner Royal Delta was sent off as the 3-5 favorite in the field of 6, but is winless in 2012 with a second in the Sabin (G3) and then 9th in the Dubai World Cup (G1). In to challenge her included 3-1 second choice St. John's River, second in the La Troienne (G2), and 5-1 third choice Afleeting Lady, an allowance winner last out after finishing 5th in the La Troienne.

8-1 Sterling Madame went to the lead early and set fractions of 23.71 and 47.70 while pressed by Afleeting Lady, who took over the lead on the far turn through 3/4 in 1:12.03, with Royal Delta stalking the lead pair third. Entering the lane, Royal Delta was asked for run by new jockey Mike Smith, and she ran by the pacesetters, opening up by 5 mid-stretch through 1 mile in 1:36.50, and drawing off to win by 8 lengths in 1:49.49. It was a long 4 1/4 lengths back from Afleeting Lady to St. John's River third.
Full results chart from DRF 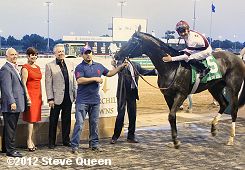 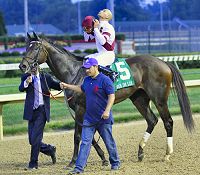 Left: Royal Delta in the winner's circle. Owner Benjamin Leon said, "She ran good in Dubai, but had a bad trip. Today, I don't think Mike had to hit her a single time. He gave her a great ride and the filly did her job. I'm very happy." Trainer Bill Mott added, She had a nice, smooth trip today and gave a good effort. She's a champion. She was a deserving champion last year and it looks like right now, from what we saw tonight, there are more good things to come. The Delaware Handicap is possible."

Right: Royal Delta returns after the race. Jockey Mike Smith said, "She's just a monster. They way she drove away from some really good fillies was pretty impressive. Bill said to get her out of there and break well and try not to take too much hold of her or I would change her stride. He said to try to get in a rhythm with her. She just had them over a barrel today. I could tell you a lot of different things, but I could have ridden her backwards today and she still would have won." 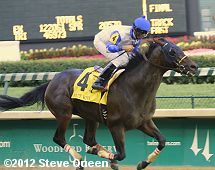 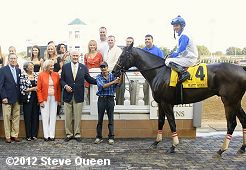 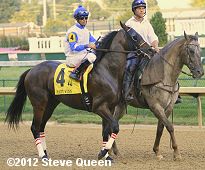 Left: Neck 'n Neck in the winner's circle. Trainer Ian Wilkes said, "Honestly, I expected him to run very well. But did I expect him to win that easily? No. Yes he does (love the track), can we just race him here all summer? We're just going to enjoy this win tonight and then we'll sit down and work out a plan."

Right: Neck 'n Neck in the post parade. Jockey Leandro Goncalves said, "This horse has a lot of talent. He had been training well in the morning and he ran big today. He's a nice horse. I felt like I had a ton of horse the whole way. When I finally asked him, he just took over and drove away." 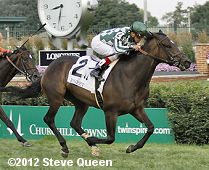 A field of 11 three-year-old fillies went to post in the $100,000 Regret Stakes (G3) at 1 1/8 miles on the turf. Maiden winner Centre Court was sent off as the 3-2 favorite over 4-1 Colonial Flag, an allowance winner last out, and 5-1 Coup, off her win in the Hilltop Stakes at Pimlico. 41-1 Zapper Belle battled for the lead with 31-1 Singn On Themoon through fractions of 23.75, 48.55, and 1:12.70 over the firm turf course, while stalked by Centre Court the whole way. Entering the lane, the pacesetters tired allowing Centre Court to inherit the lead through 1 mile in 1:36.29. Colonial Flag ralled from 4th but was a length short as Centre Court completed the trip in 1:48.25. It was another 1/2 length back to 12-1 Treasured Up third.
Full results chart from DRF 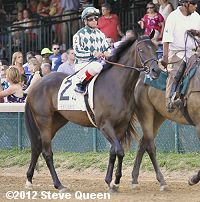 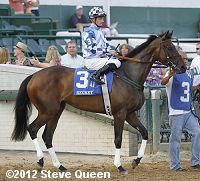 Left: Centre Court in the post parade. Trainer Rusty Arnold said, "That was a very nice win and we are really happy with her. That was a good group. She made a good step up today. It's very big to get a graded stakes win with a filly. It's very good for the whole family. It's nice to see this filly win here. I trained her mom to win a graded stakes here." Jockey Javier Castellano added, "It was the dream trip; the one I was looking for. I stalked behind the speed and it worked out great. She is a very nice filly and has been progressing every time. I like her and she's really honest. She put in a lot of effort today and responded very well. She gave me a good kick at the end."

Right: Second place finisher Colonial Flag heads out for the post parade. Trainer Michael Matz said, "(Jockey Julien Leparoux) said she ran a little green when she came up alongside her (Centre Court). I think they're both two really good fillies and I'm sure they're going to meet again along the way. I think it was a good race."