Kentucky Derby Alumni Day (formerly known as Reunion Day and Super Saturday) is the biggest day of racing at Churchill Downs outside of Kentucky Derby weekend. Many past Kentucky Derby winning jockeys and trainers were at the track to sign autographs, including the connections of this year's winner Super Saver. Five graded stakes races were conducted on Saturday afternoon, under sunny skies and temperatures in the mid 90's. 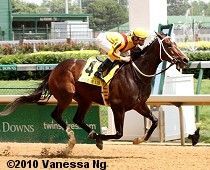 The distaff counterpart to the Stephen Foster is the $200,000 Fleur de Lis Handicap (G2) for older fillies and mares going 1 1/8 miles on the main track. As expected, Rachel Alexandra was sent off as the 1-10 favorite in the field of just 5, off two straight defeats in the New Orleans Ladies and the La Troienne. In to challenge her included 6-1 second choice Jessica is Back, winner of the Ocala Stakes but second in the Sixty Sails last out, and 13-1 third choice Made for Magic, winner of the Milady at Hollywood. Jockey Garrett Gomez sent Jessica is Back to the rail and to the lead and was soon joined by Rachel Alexandra to her outside. The pair dueled through fractions of 23.93, 47.25, and 1:11.16 over the fast track. Entering the stretch, Jessica is Back tired as 18-1 fourth choice Distinctive Dixie moved up to challenge, but Rachel Alexandra surged ahead, opening up by 5 lengths at the 1/8 pole through a mile in 1:35.90. The reigning Horse of the Year drew off in the final furlong to win by 10 1/2 lengths in 1:48.78. It was another 2 lengths back from Distinctive Dixie to pacesetter Jessica is Back third.
Full results chart from DRF 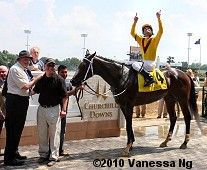 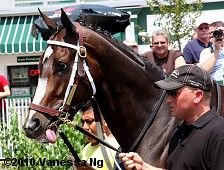 Left: Rachel Alexandra in the winner's circle with owner Jess Jackson on the far left. Her jockey Calvin Borel said, "She's just getting back. You have to give her a chance. She's a filly and she did the impossible when she was a 3-year-old. I think you'll see a great future now. She did everything right today. Steve (Asmussen) told me just to run my race and see where we're at. She showed up today. She felt the same. I just don't think she was ready before. Steve knows what he's doing. She showed up today. She was perfect and we couldn't ask for more."

Right: Rachel Alexandra in the paddock before the race. 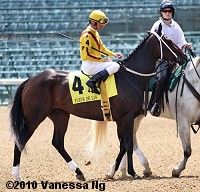 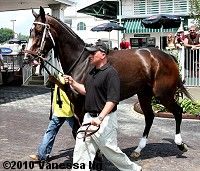 Left: Rachel Alexandra in the post parade. Her trainer Steve Asmussen said, "I'm very proud for everybody involved that she won. We are all grateful that (co-owners) Mr. (Jess) Jackson and Barbara (Banke) put a Horse of the Year back in training and take all the advice or criticism or whatever, but she is a tremendously sound filly. She's a machine and she ran a great race today, and hopefully this is a step in the right direction for the rest of the year. It's an honor to train a horse like her. We will take her back to the barn and there will be a lot of petting her, and peppermints, and loving on her."

Right: Rachel Alexandra in the paddock before the race with assistant trainer Scott Blasi. 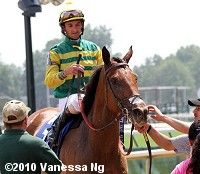 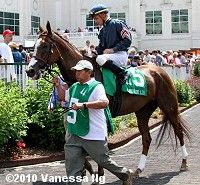 Left: Second place finisher Distinctive Dixie returns after the race. The 18-1 fourth choice stalked the pacesetters in third early under jockey Robby Albarado, put in a challenge at the 1/4 pole but was no match for the winner, beaten 10 1/2 lengths. The Wallace Dollase trainee improved her record to 4 wins, 6 seconds, and 2 thirds in 16 starts, earning $274,396 for owner Robert and Beverly Lewis Trust.

Right: Third place finisher Jessica Is Back in the paddock before the race. The 6-1 second choice battled with Rachel Alexandra for 7 furlongs under new jockey Garrett Gomez before tiring and fading to finish third beaten 12 1/2 lengths at the line. The Martin Wolfson trainee improved her record to 11 wins, 13 seconds, and 3 thirds in 43 starts, earning $567,785 for owner Farnsworth Stables LLC. 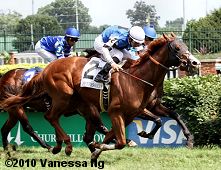 A field of 9 three-year-olds went in the $100,000 Jefferson Cup Stakes (G3) at 1 1/16 miles on the turf. American Turf runner-up Asphalt was sent off as the 5-2 favorite over 3-1 Our Douglas, an allowance winner last out, and 7-2 Lost Aptitude, ninth in the American Turf last out. Jockey Garrett Gomez sent Lost Aptitude to the lead first time past the stands and he set slow early fractions of 24.77, 50.19, and 1:14.59 over the good turf, while being stalked by 35-1 Formulaforsuccess down the backstretch. Turning for home, Lost Aptitude tired as favorite Asphalt took a short lead at the 1/8 pole. However, 9-1 Gleam of Hope, last early, came out wide for the drive and rallied down the center of the course to win by 1/2 a length over 26-1 Psychic Income in 1:45.61. It was just 3/4 length back to Asphalt third.
Full results chart from DRF 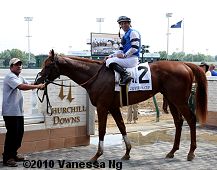 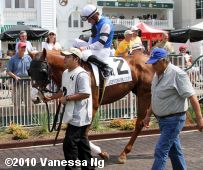 Left: Gleam of Hope in the winner's circle. His jockey E.T. Baird said, "We put blinkers on him this time and it made him focus a little more and a little more aggressive. The plan was to lay him a little closer today, but the way the race worked out we got pinched back a little bit. He was being aggressive and I didn't want to fight him the whole way, so I thought the best thing was to lay back and it made him relax."

Right: Gleam of Hope in the paddock before the race. His trainer Tony Reinstedler said, "Before the blinkers he was so far out of his races and he had way more to do. He's always been a solid horse and he's shown that. If you look at the past performances he has run against the best and he's better on the grass than the dirt. I'm real proud of him. He's responded to what we wanted to do with a turf schedule for this year, and so far it's working out for us. The Mid-America Triple at Arlington Park will probably be next for him." 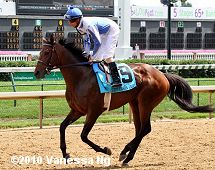 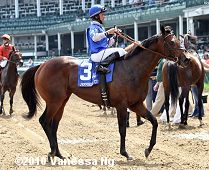 Left: Second place finisher Psychic Income returns after the race. His jockey Corey Lanerie said, "I had a great trip. I was just stalking on the outside and moved when I was ready. It looked like I was going to run them down."

Right: Third place finisher Asphalt returns after the race. His jockey Jose Lezcano said, "He had good position but I just don't think he liked the grass." 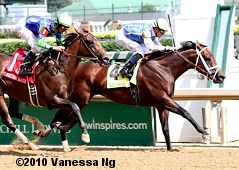 The $125,000 Northern Dancer Stakes (G3) featured three-year-olds going 1 1/16 miles on the main track. Allowance winner Colizeo was the 8-5 favorite in the field of 6 making his stakes debut. In to challenge him included 5-2 second choice Prince Will I Am, 5th in the Lexington then second in an allowance, and 7-2 third choice Crider, second in the Lone Star Derby last out. Colizeo went to the lead first time past the stands under jockey Garrett Gomez and was allowed an uncontested lead of as many as 1 1/2 lengths through slow early fractions of 24.89, 49.19, and 1:13.22, with 5-1 Worldly stalking him in second. Entering the stretch, Worldly moved up to challenge setting up a duel to the line. The pair battled for the final 3/16 mile but Colizeo proved best, holding off Worldly by a neck in 1:43.60. It was another 2 lengths back to 9-1 Vow to Wager third.
Full results chart from DRF 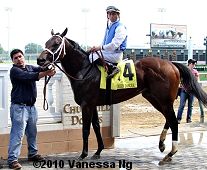 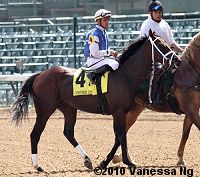 Left: Colizeo in the winner's circle. His jockey Garrett Gomez said, "We didn't feel like there was a whole lot of pace in the race and he ran pretty good like that the other day so ideally I wanted to ride him like I did the other day.(Worldly) kept coming on and I thought I had him where I wanted. I asked mine for a little more and his horse would come back and eyeball me again. I thought once I really asked my horse I thought I would run away with it. I had a hard time doing that today. This was a good test for the horse."

Right: Colizeo in the post parade. His trainer Todd Pletcher said, "He set a nice easy pace up front and really showed he had some talent today. We've taken our time with him and he's run against some talented horses. If you look at the allowance race at Gulfstream, he ran against the likes of Fly Down and First Dude. He ran a good race and keeps taking a step forward after every race. He has potential. We'll see how he comes back and look at our options for his next start." 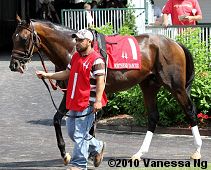 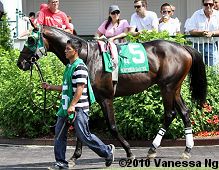 Left: Second place finisher Worldly in the paddock before the race. His jockey Robby Albarado said, "On the first turn I just got pinched back and squeezed." The Paul McGee trainee improved his record to 1 win, 4 seconds, and 1 third in 10 starts, earning $109,792 for owner-breeder Jay Em Ess Stable.

Right: Third place finisher Vow to Wager in the paddock before the race. The 9-1 fifth choice settled in third on the inside early under jockey Miguel Mena, could not gain on the leaders and finished third beaten 2 1/4 lengths. The Dale Romans trainee improved his record to 2 wins, 1 second, and 1 third in 9 starts, earning $117,921 for owner Donegal Racing. 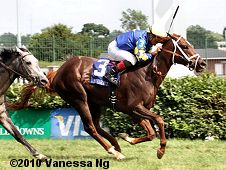 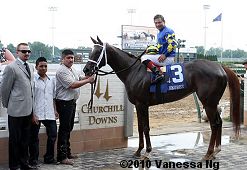 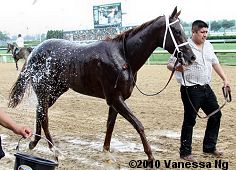 Left: Caminadora in the winner's circle. Her jockey Corey Nakatani said, "Overall, we had a great trip. (Trainer) Todd (Pletcher) said 'Let's try to save as much ground as we can and try to make one run. She's not as good as the others on numbers but she's been doing good.' I got pinched back a little at the start, but we weren't too worried about that because we wanted to lay back and get her nice and relaxed and make one run - the winning one - and she did."

Right: Caminadora gets a last splash of water before heading to the barn. Her trainer Todd Pletcher said, "She's a filly that last year showed some promise at 2 and we went to Florida and wanted to find a way with her a little bit. Her last race wasn't as good but over analyzing the race and looking at the figures it was better than it appeared, so we decided to take a shot. Her choices were to run back in a one-other-than (allowance) last week or wait the extra week and run here and give her the extra time. It worked out well and she was able to get a good trip. She got fanned out pretty wide at the top of the stretch, but it wasn't a bad thing here. The main thing was to get her to settle the first part. It's been a great day so far. We'll play it by ear for what's next." 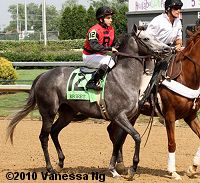 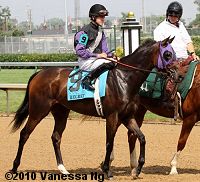 Left: Second place finisher Snow Top Mountain in the post parade. Her jockey Frederic Lenclud said, "The trainer (Tom Proctor) told me just to take her back and let her relax. There were horses on the inside so I had to go outside and the better ground was on the outside. She made a good run down the lane."

Right: Third place finisher Queen Hazel in the post parade. The 50-1 longest shot raced in 10th early under jockey Brian Hernandez Jr., came out 5 wide for the drive and rallied to get third beaten 1 1/2 lengths. The Daniel Sanner trainee improved her record to 1 win, 0 seconds, and 3 thirds in 7 starts, earning $54,754 for owner Lucky 8 Stables LLC.