Stephen Foster Handicap day features six graded stakes races worth over $1 million contested at historic Churchill Downs. It was a typical June day in Louisville, with the crowd enjoying sunny skies and temperatures in the high 80's, resulting in a fast main track and firm Matt Winn turf course. 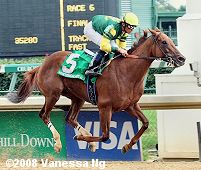 Kicking off the stakes action was the distaff counterpart to the Stephen Foster, the $300,000 Fleur de Lis Handicap (G2) for older fillies and mares going 1 1/8 miles on the main track. Just five faced the starter with Hystericalady sent off as the 1-2 favorite exiting a close third place finish in the Humana Distaff last out. Peach Flambe, fourth in the Allaire du Pont Distaff at Pimlico in her last start, was the 3-1 second choice. 15-1 longest shot Initforthekandy went to the front first time past the stands and was stalked by Hystericalady for the first 5 furlongs through a quarter in 24.78 and a half in 49.69. Jockey Garrett Gomez asked Hystericalady at the half mile pole and she quickly passed the pacesetter after 3/4 in 1:13.67. Under mild urging, Hystericalady drew off through the stretch to a convincing 7 1/2 length victory over Initforthekandy in 1:58.88. It was another 1 3/4 lengths back to 10-1 Kathleens Reel third.
Full results chart from DRF 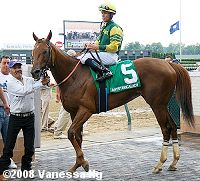 Hystericalady in the winner's circle. Winning jockey Garrett Gomez said, "This is the first time I have ridden her and she is a nice, nice mare. I thought there might be one or two more horses go for the lead. I eased her out at the half-mile and she moved on. At the head of the stretch, she gave me a little more kick than I was expecting."

Winning trainer Jerry Hollendorfer said, "This worked out good for us. I am not sure when her next race is going to be, but it probably won't be at Del Mar. I would think she may run two more times before the Breeders' Cup." Asked about the synthetic track at Santa Anita, he added, "I can say that it is not her best surface, but she still has run well on it. Hopefully we will be around at the year of the year and get back to Santa Anita." 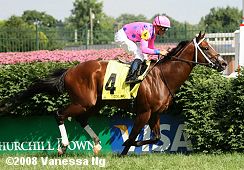 The $200,000 Jefferson Cup (G2) featured 3-year-olds going 1 1/8 miles on the turf. Old Man Buck, unraced since winning the Grand Canyon Handicap in November, was sent off as the 2-1 favorite over 3-1 Tizdejavu, winner of the Crown Royal American Turf. Tizdejavu was sent to the front immediately by jockey Garrett Gomez, and he set an easy pace of 24.48, 48.06, and 1:12.31 over the firm course, opening up a 5 length advantage after half a mile. 5-1 Wicked Style sat second for the first 7 furlongs. Entering the stretch, Tizdejavu accelerated away from the competition, pulling away to a 7 length lead at the 1/8 pole after a mile in 1:36.35. 8-1 Golden Yank closed well from seventh but was left with too much ground to cover, as Tizdejavu cruised to a 4 length gate-to-wire win in 1:49.15. It was 1/2 a length back to favorite Old Man Buck in third, who raced in midpack fourth but could not gain late.
Full results chart from DRF 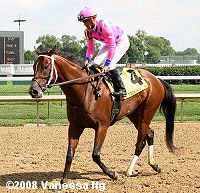 Tizdejavu returns after the race. Winning trainer Greg Fox said, "I think his performance speaks for itself. We are going to enjoy this victory now (before committing to the next race). He has plenty of options. We decided to put him on the grass after he ran in the allowance race at Keeneland (on April 12). Garrett felt that the Polytrack may be not his best surface and that he would like the grass. He is a very happy horse."

Winning jockey Garrett Gomez said, "There did not seem to be a lot of speed in there looking at the race. Julien (Leparoux on Wicked Style) and I broke about two lengths ahead of the field and then he took back. This colt has nice, huge stride and he just went on from there." 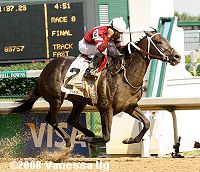 The $175,000 Northern Dancer Stakes (G3) featured a field of six 3-year-olds going 1 1/16 miles on the main track. Recapturetheglory was the 11-10 favorite making his first start since finishing fifth in the Kentucky Derby, with Derby 8th place finisher Pyro the 9-5 second choice on the board. 12-1 Texas Wildcatter battled for the lead with 11-1 My Pal Charlie through fractions of 24.88, 48.83, and 1:13.08, while Pyro sat about 2 lengths off them in third. Turning for home, jockey Shaun Bridgmohan took Pyro 3-wide for room. Pyro easily passed the pacesetters at the 3/16 pole and drew off to win by 1 3/4 lengths over My Pal Charlie in 1:43.53. It was another 1 1/4 lengths back to 9-2 third choice Visionaire third, while favorite Recapturetheglory, who was unhurried early, ran into traffic and could not rally, finishing fourth.
Full results chart from DRF 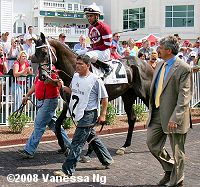 Pyro in the paddock before the race with trainer Steve Asmussen on the right. Asmussen said, "The horse left there very cleanly today and Shaun had him in great position. He ran a very strong race. Pre-race, he was very confident and back to how he was over the winter. Hopefully this is the first step to a very good second half of the year. He was coming off two extremely disappointing efforts for a top-class horse. This was a quality field today and he handled what was thrown at him. He was a lot sharper in the race and looked comfortable the whole time."

Winning jockey Shaun Bridgmohan said, "Obviously, he's tactical and he's so classy. You can do whatever you want with him. Steve and his crew did a fabulous job. He's been a temperamental horse, but he was fabulous today. The work that they've put into him has, obviously, paid off." 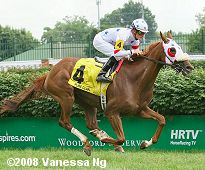 The $200,000 Regret Stakes (G3) was the first turf stakes race on the card, for 3-year-old fillies at 1 1/8 miles. Pure Clan, making her first start since finishing third in the Kentucky Oaks, was the even-money favorite over 5-2 Zee Zee, winner of the Edgewood last time out. Zee Zee and 4-1 third choice C J's Leelee battled on the front end through fractions of 24.51, 49.48, and 1:14:04 over the firm going, with Pure Clan stalking them in third down the backstretch. C J's Leelee continued to lead in midstretch after a mile in 1:38.04, but Pure Clan, who came out wide for running room, found another gear and passed the pacesetters easily to prevail by 2 3/4 lengths over C J's Leelee in 1:49.86. It was another 1 1/2 lengths back to Zee Zee third.
Full results chart from DRF 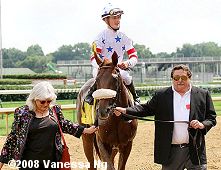 Breeder and part-owner Lewis Lakin (right) leads Pure Clan to the winner's circle. Winning trainer Robert Holthus said, "I think I know where we will be spending the Fourth of July (at Hollywood Park in the American Oaks Invitational) if we get an invitation. She has trained well on the grass since the Kentucky Oaks and her last work was just awesome. We felt all along that her action was better suited for the grass than the dirt."

Winning jockey Julien Leparoux said, "We had the ideal scenario with the two horses to beat setting the pace. It was a little tight, but when you are inside and have the good horse and the gas to go, you can do whatever you want." 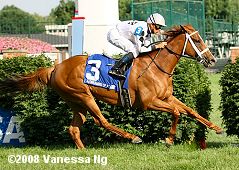 The last race on Stephen Foster Super Saturday was the $150,000 Early Times Mint Julep Handicap (G3) for older fillies and mares going 1 1/16 miles on the turf. Dreaming of Anna, second in the Churchill Distaff Turf Mile last time out, was the 1-2 favorite in the field of 8 over 8-1 second choice Ciao, fifth in the Reluctant Guest Stakes at Arlington in her last start. Jockey Garrett Gomez sent Dreaming of Anna to the lead immediately and she set a pace of 24.23, 48.34, and 1:12.82 while being stalked by 11-1 Street Sounds in second. Turning for home, Gomez asked her to open up and she did, pulling away to a 2 1/2 length lead after a mile in 1:36.55. 9-1 Ballymore Lady closed strongly from the outside after racing seventh early, but was no match for Dreaming of Anna who finished 2 1/2 lengths ahead in 1:42.77. It was another 1 1/2 lengths back to 26-1 longest shot Kiss With A Twist third.
Full results chart from DRF 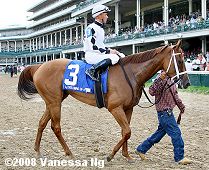 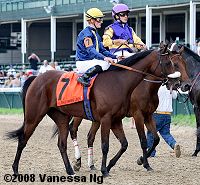 Left: Dreaming of Anna heads for the winner's circle. Winning trainer Wayne Catalano said, "The Beverly D. is one of the races we have targeted for her and after today, obviously she is headed in the right direction. She will leave tomorrow to go back to Chicago." Winning jockey Garrett Gomez said, "I got a little pressure early on from Robby (Albarado on Street Sounds), but then she settled into a nice rhythm. I was able to give her a little breather at the 1/2 mile pole and then she came home nicely." 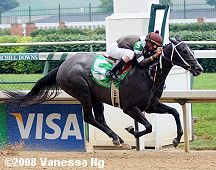 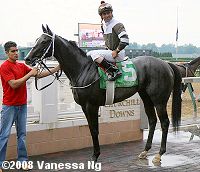 On Friday, the fourth race, a 5 furlong main track sprint for maiden 2-year-old fillies for $41,400, featured the debut of Ocean Colors, a grey filly by Orientate out of 1988 Kentucky Derby winning filly Winning Colors. (full pedigree) Sent off as the 3-2 second choice in the field of seven, she did not disappoint, breaking sharply and setting the pace the whole way, dismissing the late challenge of 6-5 favorite Jehan and drawing off to a 5 1/4 length victory in 57.08.

Her trainer Steve Asmussen said, "She sure has a lot of class. I didn't know she'd be that fast from the (starting) gate. Who knows how good she might be?" The Gainesway homebred Ocean Colors is the next-to-last foal of Winning Colors, who died on February 17 following complications from colic.