Thanksgiving is the biggest weekend of racing after the Breeders' Cup, with horses "on the bubble" for championship considerations able to get in one final stakes race to try to persuade the voters. Just 3,247 were on hand at Aqueduct on Thanksgiving Day for the $100,000 Fall Highweight Handicap, contested at 6 furlongs on the main track. A throwback to the old days, the race involves horses carrying much higher weights than they normally would. In the seven-horse field, all but one carried in excess of 130 pounds. Maryland Million Sprint Handicap winner Grand Champion (130 pounds) was sent off as the 2-1 favorite over 3-1 second choice Bishop Court Hill (133),who hadn't won since the Paumonok Handicap in January.. 7-2 City Attraction (130), making his stakes debut after 2 straight wins in allowance company, rounded out the top three on the toteboard.

Bishop Court Hill battled on the front end with 11-1 longest shot Debussy (carrying low weight of 126 lbs) down the backstretch through a quarter in 21.92 and a half in 45.12, while favorite Grand Champion stalked them in third along the rail the whole way. The pacesetters both tired entering the stretch eventually finishing out of the money, as 7-1 Joey P. (131 lbs) rallied four wide to gain a short lead over Grand Champion in mid stretch. However, Grand Champion fought back in the final 1/16 to prevail by a head in 1:09.90 over the good main track. It was just a neck back to City Attraction in third. 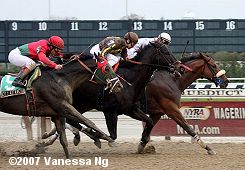 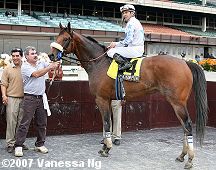 Grand Champion in the winner's circle. His trainer Jimmy Jerkens said, "I loved the way he came back on. He broke with the field, and that helps a lot. He was able to sit where he was without having to make a big run. I knew he was going to be tough after that. He is out of a Wise Times mare, so there is no reason why he shouldn't be able to stretch out a bit. We're taking him to Florida for the winter." 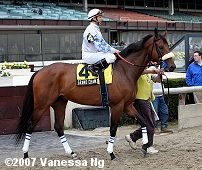 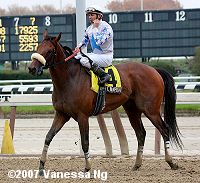 Left: Grand Champion comes out for the post parade.

Right: Grand Champion returns after the race. His jockey Eibar Coa said, "He always makes it hard for me. He doesn't break. Today, he broke good, though. He let (Joey P.) go by and made me work. At the 1/8 pole, I never thought he would come back. But he kept trying. I saw that horse wasn't getting away from me, so I kept pushing and pushing. He finally came back at got it." 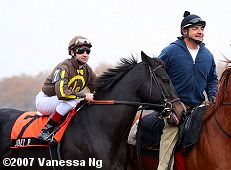 Second place Joey P in the post parade. 8-1 shot Joey P came into the race off a close second in the Monmouth University and a win in the Eillo. He was hustled along the outside by regular rider Joe Bravo, rallied four wide into the lane, led briefly, but was outfinished by the winner. The Ben Perkins Jr. trainee improved his record to 13 wins, 2 seconds, and 1 third in 26 starts earning $680,498 for owner John Petrini. 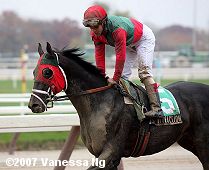 Third place finisher City Attraction returns after the race. 7-2 third choice City Attraction came into the race off of allowance wins at Saratoga and Belmont, but is still winless at Aqueduct. He raced back in 5th early along the inside, was taken wide by jockey Javier Castellano for the drive, and finished well to get third in his stakes debut. The Richard Dutrow trainee improved his record to 4 wins, 5 seconds, and 2 thirds in 15 starts earning $187,039 for owner Four Roses Thoroughbreds.

The stakes action at continued on Friday with the $150,000 Top Flight Handicap (G2) for older fillies and mares going 1 mile around one turn of the main track, before just 3,196 fans. Golden Velvet, coming off an allowance win in her first U.S. start after racing in France and Dubai, was sent off as the 2-1 favorite over 5-2 second choice Pool Land, winner of the Beautiful Pleasure at Belmont last time out. 6-1 Altesse, who was eased in her last start after finishing sixth in the Spinster, rounded out the top three on the board.

8-1 Lady Marlboro battled on the front end with Pool Land down the backstretch through fractions of 23.38, 46.98, and 1:11.96, with 7-1 Mini Sermon stalking them in third the whole way. Entering the stretch, Lady Marlboro continued to lead as Pool Land tired and faded from contention. Mini Sermon and Lady Marlboro battled for the final 1/16 mile but at the finish, Mini Sermon got her nose on the line first to get the win in 1:37.29 over the good main track. It was a long 2 1/4 lengths back to favorite Golden Velvet in third. 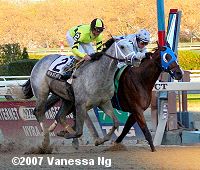 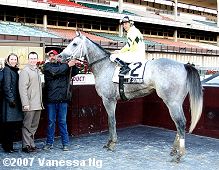 Mini Sermon in the winner's circle. Seth Benzel, assistant to trainer Todd Pletcher said, "Coming into this race, she was doing everything right. Eibar put a perfect ride on her. He saved ground and let her relax. He was able to move her out, and wear them down after that. I don't know what they are going to do with her. I certainly think she would be very useful here." 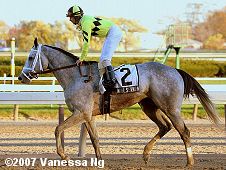 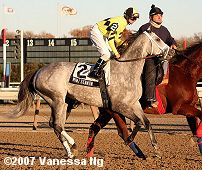 Right: Mini Sermon in the post parade. Her jockey Eibar Coa said, "I was trying to bide my time. At the 3/8 pole, I knew I had some horse, but I didn't know how much horse. My horse was running, but the other horse wasn't stopping. She kept digging and digging and finally put a head in front." 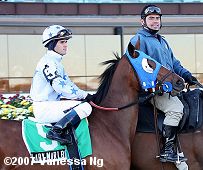 Second place Lady Marlboro comes out of the paddock for the post parade. Her trainer Jimmy Jerkens said, "I didn't think she would be on the lead, but she broke so sharply that I had no problem with her being there. I didn't think Mini Sermon could beat her. I'm going to take her down to Florida."

Her jockey Javier Castellano said, "She ran huge. I thought there was more speed in the race, but I was the only one to go to the lead. I just didn't want to fight her. She was coming back. It was the race where we got beat by the head-bob." 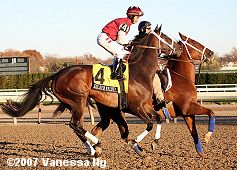 Third place finisher and beaten favorite Golden Velvet in the post parade. The beaten favorite and third place finisher raced back in sixth early in traffic under jockey Alan Garcia, came wide into the stretch and put in a good rally but was no match for the first two. The Kiaran McLaughlin trainee improved her record to 2 wins, 2 seconds, and 3 thirds in 10 starts earning $92,909 for owner-breeder Darley Stable.