Saturday March 6 marked the end of an era as Windfields Farm, the great breeding powerhouse founded by Canadian industrialist E.P. Taylor, was liquidated in a public auction. The farm in Oshawa, Ontario, named after the first horse Taylor bred, was once home to over 600 racehorses in its 1400 acres, including its most famous product, 1964 Kentucky Derby winner Northern Dancer, who went on to sire 146 stakes winners and appears in the pedigrees of about 90% of modern Thoroughbreds, through such sons as Danzig, Sadler's Wells, Storm Bird, and 1970 English Triple Crown winner Nijinsky II. However, after Taylor's death in 1989, the future of the farm was clear. His son Charles took over and downsized the farm, and then after he succumbed to cancer in 1997, Charles' widow Noreen and the Taylor estate eventually made the decision to shut down completely. The last two dozen horses were sold at Keeneland in November 2009. Many sections which were once part of the farm have already been sold and developed, mostly as new homes with some parts going to Durham College and the University of Ontario Institute of Technology. The remaining property will be developed into residential and retail uses.

Judith Taylor Mappin, daughter of E.P. Taylor, said in August 2009, "What my father started has lasted far longer than anyone ever imagined. We have been so fortunate with our horses and our staff that we remained in the business we love for decades longer than expected. Now, with the older grandchildren beginning to face their own retirement plans, it is simply time to wind things up. Our horses have been so good to us, it was tough to let go."

Noreen Taylor said in an interview before the auction, "I miss the horses. I miss them as individuals. And, I miss seeing the babies. I used to love this season because there'd be a new baby born lots of days and I'd go out and watch. I'd go out in the middle of the night just to see a foaling. A birthing is magical. I miss turning up the main drive. I miss the apple orchard that used to be there. You shed a tear for the memories and things you won't be able to do anymore. And, yet I cannot go backwards, I have to be responsible. I hate the responsible part."

An estimated 5,000 people came out to the farm for the auction, conducted by Gary Hill Auctions of Uxbridge, Ontario. Some serious buyers came looking for bargains on farm equipment or furniture, others shopping for memorabilia, but many came just to see Northern Dancer's grave, as the farm was always closed to the public and this was the only opportunity for people to see the farm as it had been, without an appointment. Paddocks that once were grazed by horses were used as parking lots, which quickly filled up by the scheduled 9:30am start. Stallion stalls were used to showcase furniture, while equipment was sold in the main arena/breeding barn. Due to the sheer volume of goods being auctioned off, three rings were in operation, and it appeared that most of the smaller goods were sold by 3:00pm, leaving heavy farm equipment, barns, fencing, and vehicles for the end of the day. 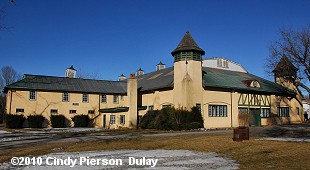 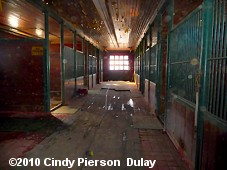 The stallion barn, breeding shed, and indoor arena at Windfields Farm was where most of the smaller items like tools, tack, blankets, signs, medical equipment, etc. were displayed and auctioned off.

To the right are the deserted main stallion stalls which were not used during the sale. 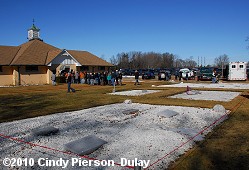 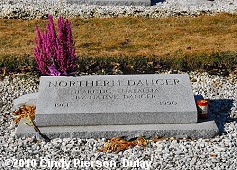 The graveyard in front of the stallion office with the line-up of people waiting to get bidder numbers in the background. They gave out over 1200 numbers and had over 5,000 people in attendance.

To the right is the gravestone for the great sire Northern Dancer. His body was brought back to the farm where he was bred from where he stood at stud in Maryland and was buried entire. Others in the cemetary include Archer's Bay, Cat's At Home, Canadiana, Victoria Park, New Providence, Ascot Knight, Vice Regent, and Windfields, the first horse bred by E.P. Taylor and a multiple stakes winner. The university plans to make the area where the graves are a park so they won't be disturbed and people can still come and visit Northern Dancer. 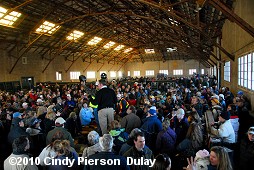 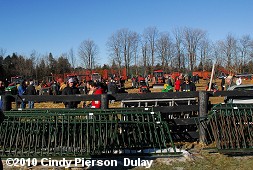 To the left is a view of the auction inside the breeding shed shortly after it started when they were selling helmets. In the back of the arena on the other side of the wall was another auction for tools used on the farm. On the right is a look at the outside area where the larger farm equipment was auctioned. There were also a few things in the office that were auctioned like chairs and office furniture as well as 50 years of Daily Racing Form Chart Books. 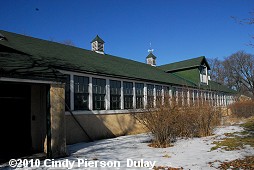 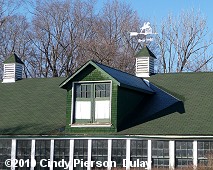 Most of the barns were being sold to be dismantled and moved elsewhere. Here is the one that was closest to the auction area. 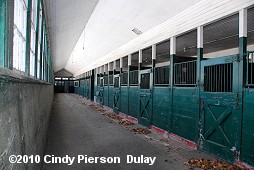 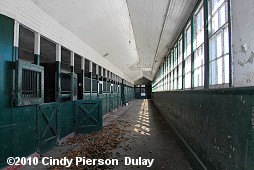 A couple of looks inside the deserted barn which already shows the effects of being unused for over a year now, with peeling paint and debris on the floor. 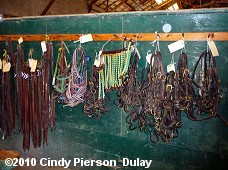 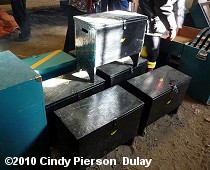 There were piles and piles of stuff being sold, mostly in lots or boxes. To the left is some of the tack bundled for sale and to the right are some of the tack boxes. Other items included signs, blankets, buckets, flak jackets, helmets, vet supplies, foal kits, tools, saddles, and just about anything you can imagine you would find on a large breeding farm. Many people were buying stuff just to have a souvenir to keep. In some cases the auctioneers did not know what they were selling! 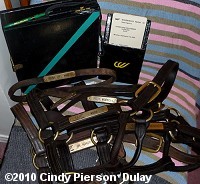 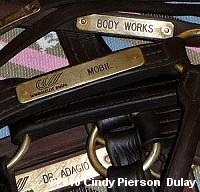 Of course I had to buy a few things while we were there. My favorite (and most expensive) was a set of 5 stallion halters, 4 with name plates for Mobil, Best of the Bests, Weather Warning, and Dr. Adagio. I also got some mare collars with name plates, and some boxes with their logo on them that they used to use at the sales.