On Saturday, a field of 11 three-year-old fillies contested the $400,000 Fantasy Stakes (G3) going 1 1/16 miles at Oaklawn Park, with the winner earning 100 points in the Kentucky Oaks Championship Series. Conditions were excellent in Hot Springs for the 18,000 fans on hand, with sunny skies and temperatures in the mid 60's. Feathered was sent off as the 5-2 favorite off a fourth place finish in a Gulfstream allowance after finishing a close second in the Starlet (G1) at Los Alamitos. In to challenge her included 7-2 second choice Sarah Sis, winner of the Honeybee (G3), and 4-1 third choice Oceanwave, second in the Honeybee.

Sarah Sis was quickest away and got the opening quarter in 23.71 before 13-1 Super Saks took over on the clubhouse turn through fractions of 47.91 and 1:13.16 while stalked by 7-1 Lady Tapit. At the top of the lane, 19-1 Include Betty, last for the first 5f, and Oceanwave, 8th early, circled the field to challenge, getting 1 mile in 1:38.00. The pauir dueled to the line as Include Betty outfinished Oceanwave by a neck in 1:44.16 over the fast track. It was another neck back to 12-1 Achiever's Legacy third, while favorite Feathered checked in 7th. Ramon Vasquez aboard Oceanwave claimed foul against Rosemary Homeister Jr. aboard Include Betty for interference in the stretch but the claim was disallowed. 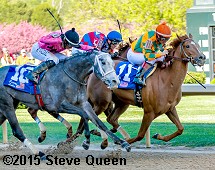 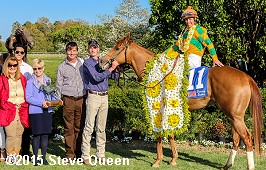 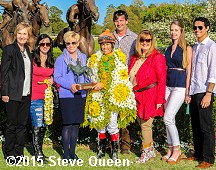 Left: Jockey Rosemary Homeister Jr. celebrates aboard Include Betty after winning the Fantasy. Homeister said, "This is an amazing little filly. I was in the 11 hole, but I wasn't all that concerned because she is a closer. I had so much horse down the backstretch, which is unusual for her because she likes to drop way out. I decide to go wide into the stretch and Joe (Rocco Jr.) and I did start going at it around the turn. I was trying to keep him in because I knew he was on one of the horses (Achiever's Legacy) to beat. Down the late it was just race riding. I just had so much horse. She really dug in to win the race."

Right: The trophy presentation for the Fantasy Stakes. 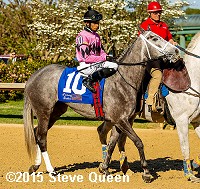 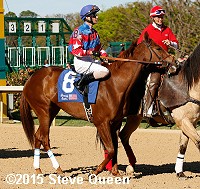 Right: Third place finisher Achiever's Legacy in the post parade. The 12-1 shot was 10th early under Joe Rocco Jr., then rallied 6 wide to get third beaten just 1/2 a length. The Jerry Hollendorfer trainee improved her record to 2 wins, 0 seconds, and 3 thirds in 9 starts, earning $178,060 for owners Campbell, Cellucci, Horowitz, Robertson, and Hollendorfer. 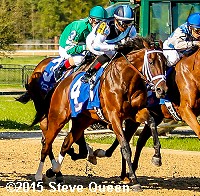 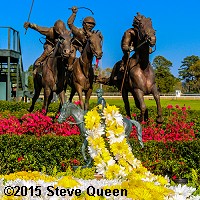 Left: Seventh place finisher and beaten favorite Feathered shortly after the start. The 5-2 choice was 5th early under Ricardo Santana Jr. but weakened late to finish 7th beaten 7 lengths. The Todd Pletcher trainee has a record of 1 win, 2 seconds, and 1 third in 7 starts, earning $309,834 for owner Eclipse Thoroughbred Partners.

Right: The trophy and flowers for the Fantasy Stakes in the Oaklawn winner's circle.