The last Grade 1 race in Canada is the $750,000 E.P. Taylor Stakes (G1) featuring older fillies and mares going 1 1/4 miles on the E.P. Taylor turf course. Conditions were typical for early October in Southern Ontario on Saturday, with cloudy skies, both turf courses firm, and a race time temperature of 11 C (52 F) with horses facing headwinds of 45 km/h (28 MPH) through the stretch.

A field of 9 made final entry, with Moira sent off as the 6-5 favorite, making her turf debut off a 3 race win streak all on Tapeta including the Woodbine Oaks and Queen's Plate Stakes. In to challenge her included 5-1 second choice Rougir, winless since the Beaugay (G2) at Belmont in May and here of a fifth place finish in the Beverly D (G1) at Churchill Downs, and 6-1 third choice Adventuring, winner of the West Virginia Senate President's Cup at Mountaineer and the AGS Ladies Marathon (G3) at Kentucky Downs.

Jockey Antonio Gallardo sent Adventuring to the lead out of the clubhouse incline and onto the backstretch through easy fractions of 26.78, 51.39 and 1:15.00 while pressed by 8-1 Mylady and stalked by 17-2 Flirting Bridge. Turning for home, Adventuring tired allowing Mylady to take over the front through 1 mile in 1:37.87. Flirting Bridge came out 4 wide to take the lead at the 3/16 as favorite Moira, 6th early and 4 wide on the turn, bore in and bumped eventual 8th place finisher Lemista into the rail. Rougir, 7th early under Kazushi Kimura, came out 5 wide for room and rallied to outfinish Moira by a neck in 2:02.62. It was a head back to Flirting Bridge third. Jockey Luis Contreras aboard Lemista claimed foul against Rafael Hernandez aboard Moira for interference and after an inquiry the stewards disqualified Moira from second and placed her eighth. 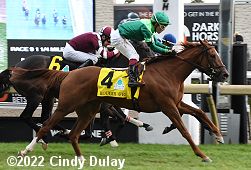 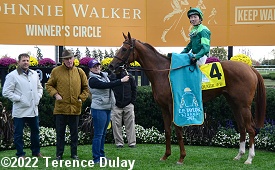 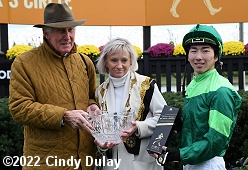 Left: Rougir in the winner's circle. Winning jockey Kazushi Kimura said, "I had been struggling because this horse had moved me up so sharply that I had to pick a pathway. So, when she comes from the corner it was tremendous, I was trying so hard. I was so confident, but those horses already had experience from the long stretch." 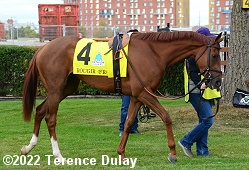 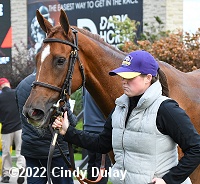 Left: Rougir in the paddock before the race. Kimura added, "The inside horse moved out so sharply. That's why I had to take a hold – I almost clipped heels. I was so confident to ride a European horse because they already have experience from the long stretch. Those horses can run good here at Woodbine."

Right: Rougir heads back to the barn after the race. 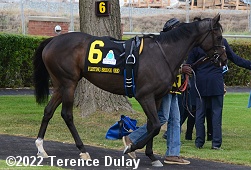 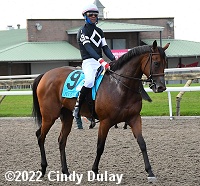 Left: Second place finisher (moved up from 3rd via DQ) Flirting Bridge in the paddock. The Brendan Walsh trainee improved her record to 2 wins, 3 seconds, and 2 thirds in 13 starts, earning $224,614 for owners John Halley and Ciara Hogan.

Right: Third place finisher (moved up from 4th via DQ) Fev Rover returns after the race. After finishing second in the Dance Smartly (G2), winning the Canadian Stakes (G2), and then placed third in the E.P. Taylor, she wins Woodbine's Ladies of the Lawn Series on points (awarded on a 10-7-5-3-2 system) and wins a $50,000 bonus. The Mark Casse trainee improved her record to 3 wins, 4 seconds, and 2 thirds in 14 starts, earning $499,514 for owner Tracy Farmer. 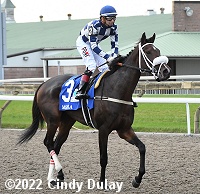 Second place finisher (disqualified to eighth) and beaten favorite Moira returns after the race. The Kevin Attard trainee has a record of 4 wins, 1 second, and 0 thirds in 6 starts, earning $908,682 for owners X-Men Racing, Madaket Stables, and SF Racing.


An hour before the Taylor, a field of 8 older horses went to post in the $250,000 Nearctic Stakes (G2), a 6 furlong sprint on the Taylor turf. Bound for Nowhere was sent off as the 4-5 favorite off his win in the Highlander Stakes (G2). In to challenge him included 9-2 second choice Ice Chocolat off an allowance win on September 4, and 8-1 third choice Cazadero, third in an allowance over the Saratoga turf on August 27..

22-1 Into the Sunrise was quickest away through an opening quarter of 22.93 before 10-1 Silent Poet took over on the turn through a half in 45.29. Into the stretch, favorite Bound for Nowhere, who stalked the pace in third early, moved up to lead through 5/8 in 56.90, but Cazadero, last early under Patrick Husbands, came out 8 wide for room and rallied by to win going away by 2 1/4 lengths in 1:09.11. It was a head back to Silent Poet third. 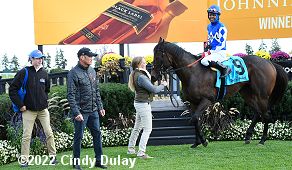 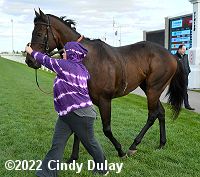 Left: Cazadero in the winner's circle. Winning jockey Patrick Husbands said, "I just looked at the form and saw that this is the second time he's gone on the turf. In the last race, he came off the pace, flying. I just tried to ride him back the same way."

Right: Cazadero heads back to the barn after the race. 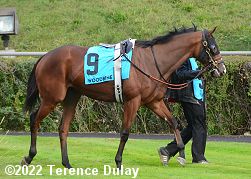 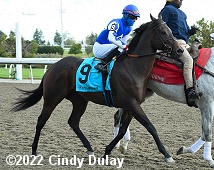 Left: Cazadero in the paddock before the race. The Brendan Walsh trainee improved his record to 4 wins, 2 seconds, and 1 third in 10 starts, earning $364,905 for owner Marc Detampel. 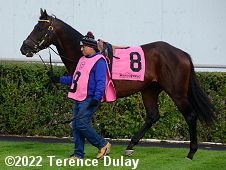 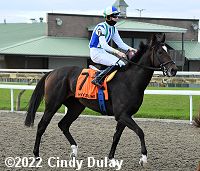 Left: Second place finisher and beaten favorite Bound for Nowhere in the paddock before the race. He improved his record to 9 wins, 3 seconds, and 3 thirds in 20 starts, earning $1,214,808 for owner-trainer Wesley Ward.

Jockey Rafael Hernandez sent 5-1 fourth choice Like the King to the lead first time by through fractions of 23.81 and 47.05 while pressed by 7-1 War Bomber and stalked by Artie's Storm. On the far turn Like the King tired allowing War Bomber to take over through 3/4 in 1:09.93. Into the stretch, Artie's Storm moved up to gain the lead through 1 mile in 1:34.54 but 9-1 Who's the Star, last for the first 3/4 mile, came out 6 wide and rallied to win by 1/2 a length over Artie's Storm in a new track record 1:40.73, 78/100 seconds faster than the old record set on September 4. It was another 3 lengths back to War Bomber third, while favorite Frosted Over failed to rally and finished fifth. 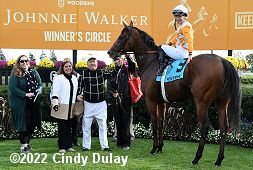 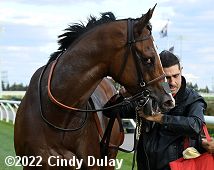 Left: Who's the Star in the winner's circle. Winning jockey Emma-Jayne Wilson said, "I knew this horse would come running on end. That's what he did the last time he was here. He handled the [surface] beautifully. He was sharper today. Mark had him primed for the cutback in distance."

Right: Who's the Star heads back to the barn after the race. Wilson added, "He was able to sit a little handier than what I expected. Down the backside, I gave him a little tap on the shoulder. He moved up and was on the bridle and willingly moving forward. I knew when I gathered him up and pulled that trigger that he was going to give me a big bullet. It was impressive." 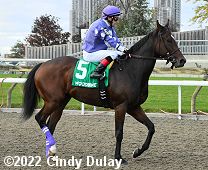 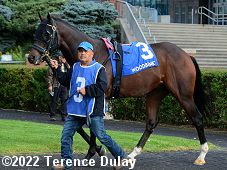 Right: Third place finisher War Bomber in the paddock before the race. The Norm McKnight trainee improved his record to 5 wins, 0 seconds, and 2 thirds in 13 starts, earning $223,617 for owner Bruno Schickedanz. 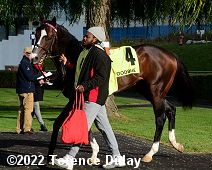 Left: Fifth place finisher and beaten favorite Frosted Over in the paddock before the race. The Mark Casse trainee has a record of 4 wins, 2 seconds, and 1 third in 13 starts, earning $281,694 for owner Gary Barber.

Right: The horses break from the gate for the Durham Cup.


Kicking off the Saturday stakes quintet was the $150,000 Woodbine Cares Stakes for 2-year-old fillies sprinting 5 furlongs on the inner turf course. Jockey Sahin Civaci sent 5-2 second choice Fearless Angel to lead through fractions of 21.87 and 45.40 while pressed by 3-1 third choice Adora and stalked by 3-2 favorite No Kay Never. Turning for home, Fearless Angel continued to lead but 7-1 Firing Bullets, 6th early under Kazushi Kimura, came out seven wide and rallied to win by a nose over Fearless Angel in 58.14. It was a neck back to favorite No Kay Never third. 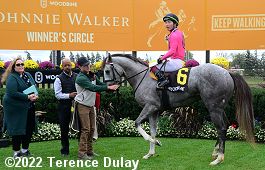 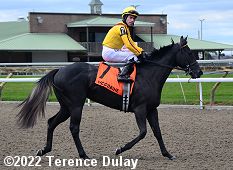 Left: Firing Bullets in the winner's circle. The Mark Casse trainee improved her record to 1 win, 0 seconds, and 0 thirds in 2 starts, earning $66,586 for owner Gary Barber.

Right: Third place finisher and beaten favorite No Kay Never returns after the race. The Wesley Ward trainee improved her record to 1 win, 0 seconds, and 1 third in 3 starts, earning $41,415 for owner Stonestreet Stables.


Closing out the stakes action was the $150,000 Ontario Racing Stakes for 2-year-olds sprinting 5 furlongs on the inner turf course. Jockey Antonio Gallardo sent 8-5 faorite Bushido to a clear lead down the backstretch and around the turn through fractions of 22.00 and 44.87 while chased by 60-1 longest shot Field Hockey and 2-1 second choice Ever a Rebel. Bushido led by 4 lengths at the 1/8 pole, with 6-1 Chiseler trying to rally to no avail, as Bushido cruised to a 2 3/4 length win in 57.52. It was another 1 1/4 lengths back to Ever a Rebel third. 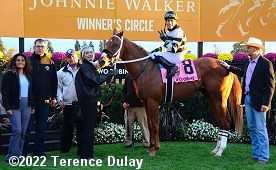 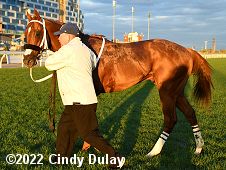 Left: Bushido in the winner's circle. Winning jockey Antonio Gallardo said, "He's pretty smart. He was ready and he knows his job. He's really fast, he makes everything so easy for me. When I ask him he gives me everything he has."

Right: Bushido heads back to the barn. Winning trainer Darwin Banach said, "It's nice to see him get out of the gate and do his thing. We had a change of ownership so there was a little more stress to get the job done. They (new owners Bushido Syndicate) just sent me two really nice horses so we're just happy to be part of their team."