The last Grade 1 race in Canada is the $600,000 E.P. Taylor Stakes (G1) featuring older fillies and mares going 1 1/4 miles on the turf. Traditionally it was the undercard feature on Canadian International day but the stakes schedule over the last 2 seasons has been retooled to account for coronavirus travel and fan attendance restrictions. Thankfully the originally forecasted rain held off until the end of the card, but it was very dark and overcast on Sunday with a race time temperature of 11 C (52 F) with the E.P. Taylor Turf Course rated "yielding", but with a GoingStick reading of 9.2, would be called "good-to-firm" in Europe.

Kalifornia Queen was sent off as the 11-4 favorite in the field of 10 off her close third in the Ballston Spa (G2) at Saratoga after just missing in the Matchmaker (G3) at Monmouth Park. In to challenge her included 7-2 second choice and last year's winner Etoile off her 2nd place finish in the Dance Smartly (G2), and 4-1 third choice Waliyak, winner of the Prix Bertrand de Tarragon (G3) at Chantilly.

Jockey Flavien Prat sent Kalifornia Queen to the lead and she set slow fractions of 27.26, 54.46, 1:20.84, and 1:45.35 while pressed by 9-1 Mutamakina and stalked by 12-1 Family Way and Waliyak. Turning for home, Kalifornia Queen continued to lead to midstretch but Mutamakina, confidently ridden by Dylan Davis stalking the slow pace, took over inside the 1/16 pole to win by a neck over late-closing 11-2 La Dragontea in 2:09.14. It was another neck back to favorite and pacesetter Kalifornia Queen third. 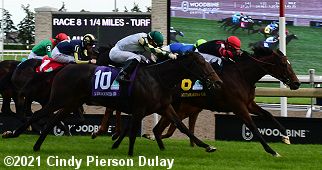 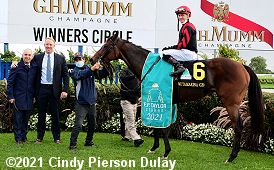 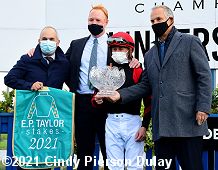 Left: Mutamakina in the winner's circle. Winning jockey Dylan Davis said, "She handled everything great. Last time she put herself in a great position laying second. Today, again, she got her nerves going a little bit more than previously, but she put herself in a great position putting herself second. We slowed down the pace and she was handling it well for me and I just needed her to finish strong. Once she got a head in front there at the 1/8 pole she was digging in nicely. She handled the turf well today." 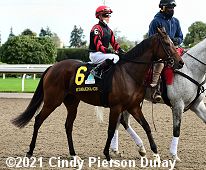 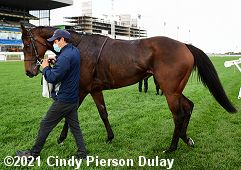 Left: Mutamakina in the post parade. Davis added, "She ran well over here about a month ago and we saw an opportunity again to bring her out here. Christophe (Clement, trainer) did a great job of getting her here. I've been breezing her, setting up for this race, and she's been breezing well and maintained herself and we knew that she would be tough coming here."

Right: Mutamakina heads back to the barn after the race. 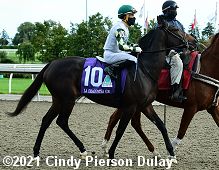 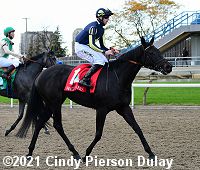 
An hour after the Taylor, a field of 10 older horses went to post in the $250,000 Nearctic Stakes (G2), a 6 furlong sprint on the turf. King Edward Stakes (G2) runner-up and Woodbine Mile (G1) winner Town Cruise was sent off as the 9-4 favorite. In to challenge him included 4-1 second choice Jolie Olimpica, 6th in the King Edward after winning the Nassau Stakes (G2), and 6-1 third choice White Flag off an allowance win after a year-long layooff.

Jockey Patrick Husbands sent 18-1 Momos to the lead and he set fractions of 22.72 and 45.95 while pressed by Town Cruise and stalked by 18-1 Turned Aside and 7-1 Avie's Flatter. Turning for home, Momos and Town Cruise tired as Avie's Flatter inherited the lead through 5f in 57.64. Kept to task by Luis Contreras, Avie's Flatter was all out to hold off Turned Aside to win by 1/2 a length in 1:10.52. It was another length back to 8-1 Olympic Runner third, while favorite Town Cruise checked in 5th beaten 4 lengths. 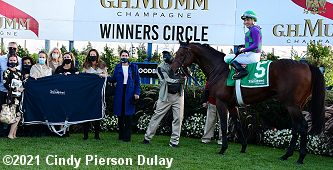 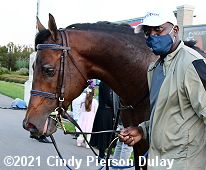 Left: Avie's Flatter in the winner's circle. Winning trainer Josie Carroll said, "This is a good horse. This horse, from the time he was two, every year, he shows up and gets it done. We have him back to sprinting now and he's thriving on it. It's wonderful. This horse is kind of a barn favorite so it's very special for all of us when he wins."

Right: Avie's Flatter heads back to the barn after the race. 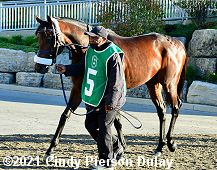 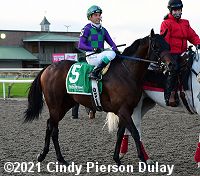 Left: Avie's Flatter walks over before the race. Winning jockey Luis Contreras said, "He handled it perfect. I got a great trip and I'm so happy with the way he ran. I got a nice trip in the backstretch, and I was loaded the whole way." 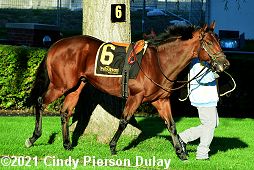 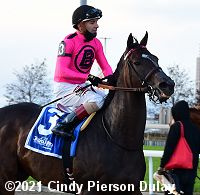 Left: Second place finisher Turned Aside in the paddock before the race. The Mark Casse trainee improved his record to 4 wins, 3 seconds, and 1 third in 13 starts, earning $289,411 for owners D.J. Stable and West Point Thoroughbreds. 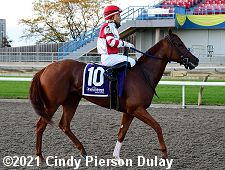 Fifth place finisher and beaten favorite Jolie Olimpica returns after the race. The Josie Carroll trainee has a record of 6 wins, 3 seconds, and 1 third in 12 starts, earning $460,507 for owner Fox Hill Farms.