Mid to late October at Woodbine traditionally includes the Pattison Canadian International (G1), but due to global pandemic related travel restrictions, the race will not be run in 2020. The $600,000 E.P. Taylor Stakes (G1) for older fillies and mares going 1 1/4 miles on the turf. is usually the undercard feature on International day but this year takes top billing. Thankfully the originally forecasted rain held off until the end of the card, but it was very dark and overcast on Sunday with a high of 14 C (57 F) with the E.P. Taylor Turf Course rated "good", but with a GoingStick reading of 10.9, would be called "good-to-firm" in Europe.

Three horses were sent off at identical favorite odds of 5-2 with Rideforthecause officially designated the favorite in the field of 7 off her win in the Canadian Stakes (G2), the main local prep for this race. Her co-favorites included Etoile, a close second in the Dance Smartly (G2), and Theodora B., winner of the Dance Smartly (G2) and then the TVG Stakes at Kentucky Downs. 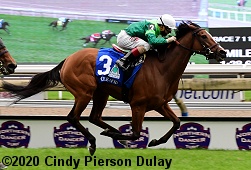 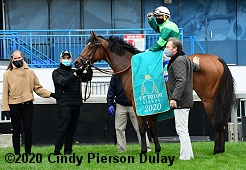 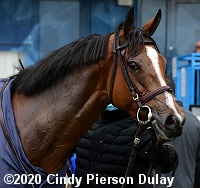 Left: Etoile in the winner's circle. Winning jockey Rafael Hernandez said, "It was a good trip. I called Chad (Brown, trainer) this morning and he told me, 'Raffi, try to get a good trip like last time. Just make sure you clear down the stretch.' He told me he'd been working the horse a few times and he put her outside of other horses, and she'd be finishing great.”

Right: Etoile heads back to the barn after the race. 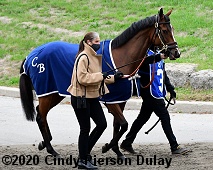 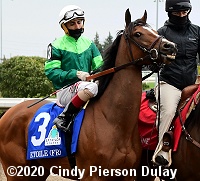 Left: Etoile walks over before the race.

Right: Etoile in the post parade. Hernandez added, "I heard that other horse coming late but I wish she was coming closer. It was too far out so my horse couldn't see. That's why I switched the whip to the left, to try to get her out and get her attention. But we did it." 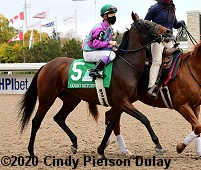 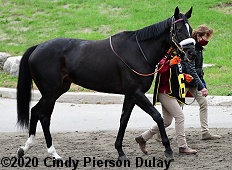 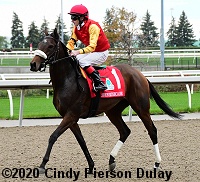 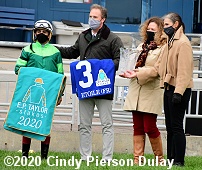 Left: Fourth place finisher and beaten favorite Rideforthecause returns after the race. The Gail Cox trainee has a record of 4 wins, 0 seconds, and 1 third in 11 starts, earning $291,226 for owner-breeder Sam-Son Farm.

Kicking off the stakes quartet was the $300,000 Northern Dancer Turf Stakes presented by Pattison (G1) for older horses going 1 1/2 miles, traditionally the main local prep for the Canadian International which was cancelled this year. Admiralty Pier was sent off as the 2-1 favorite in the field of 8 off his 6th place finish in the Woodbine Mile (G1) after finishing 2nd in the King Edward (G2). In to challenge him included 3-1 second choice Count Again, winner of the Singspiel (G3), and 9-2 third choice Nakamura, 4th in the Singspiel. 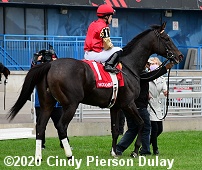 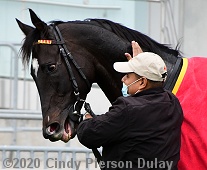 Left: Say the Word in the winner's circle. Winning trainer Gail Cox said, "I think this horse kind of likes to know the people that he's with, so he's not one that's easy to shift around all the time. He also loves this turf course and he loved the distance. Last year, he was sent to me and we ran him on the Tapeta, and it was not to his liking."

Right: Say the Word heads back to the barn after the race. 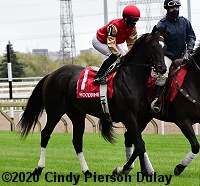 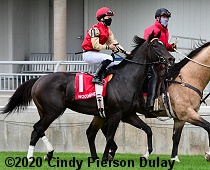 Left: Say the Word behind the starting gate. Winning jockey Emma-Jayne Wilson said, "The first time I rode him, Gail let me know that Junior Alvarado from Saratoga had said that he was funny with his mouth, he could be a little sensitive and to trip him [out] in a certain sort of way. Last time, we got the one-hole going 1 1/4, and I just got shuffled back. It took me a bit to just kind of get on the same page with him last time, being as sensitive as he was. I mean, he ran well, he ran third, but he was coming on end. So today, I was more confident with him, more ground and I knew where the line was with him for my hands and give and take. He settled for me beautifully; I literally just held the mane for pretty much the first mile and a quarter. Then as I gathered him up, I knew...I just knew. He was gaining on them last time and I just knew when he straightened, he was already in flight and it was going to be tough to beat him.”

Right: Say the Word returns after the race. 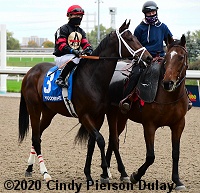 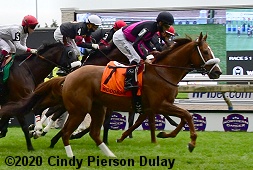 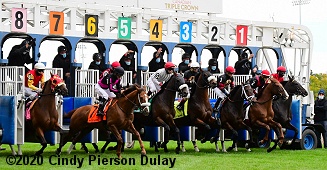 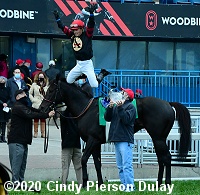 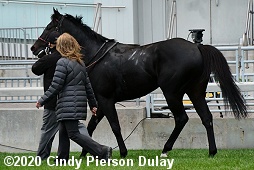 Left: Silent Poet in the winner's circle as jockey Justin Stein does a flying dismount. Stein said, "He just leaves the gate so quick. He hits his stride right away. With a horse like that you get position and just slow him down, save as much horse as you can, and he does the rest. He loves his job, and when you ask him to run, he just gives you everything. He tows you down the lane."

Right: Silent Poet heads back to the barn after the race. The win marks trainer Nick Gonzalez' first stakes win since losing his wife Martha to cancer. Stein added, "It has a lot of meaning. People watching on the outside might not understand, but the family here, the community at Woodbine, I'm sure they were cheering big for this horse for reasons that we all know." 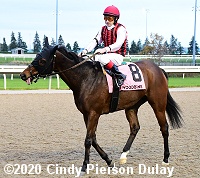 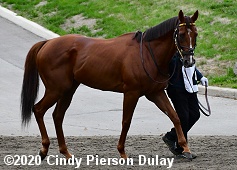 Left: Second place finisher City Boy returns after the race. The Michael Keogh trainee improved his record to 3 wins, 8 seconds, and 3 thirds in 21 starts, earning $380,062 for owners The Estate of Gustav Schickedanz and Donald Howard.

Right: Third place finisher Kanthaka walks over before the race. The Graham Motion trainee improved his record to 3 wins, 2 seconds, and 4 thirds in 14 starts, earning $440,703 for owner West Point Thoroughbreds.


Closing out the stakes action was the $100,000 Display Stakes for 2-year-olds sprinting 7 furlongs on the Tapeta main track. Helium was sent off as the 7-5 favorite in the field of 7 off his debut win on September 27, over 8-5 Maclean's Posse, a debut winner on August 29, and 5-1 Gospel Way, 4th in the Soaring Free after finishing 3rd in the Victoria Stakes.

7-1 Souper Classy and Maclean's Posse battled for the lead down the backstretch and around the turn through fractions of 23.64 and 46.40 while stalked by Gospel Way. Turning for home, Souper Classy tired badly as Helium, 4th early under Emma-Jayne Wilson, swept to the lead through 3/4 in 1:10.27. Keptt to task by Wilson, Helium drew off to win by 4 1/4 lengths over Gospel Way in 1:22.62. It was a neck back to 57-1 longest shot Decimator third. 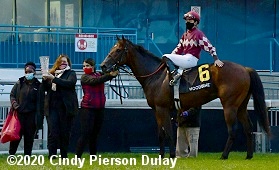 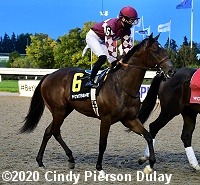 Left: Helium in the winner's circle. Winning jockey Emma-Jayne Wilson said, "First time he ran, we wanted to just get his legs and come running. He was up near the point and when I asked him to quicken, he quickened. So today, I was pretty confident. They set some decent fractions in front of him and he wasn't fazed. Even the horse on the outside moved up and he was like 'Oh, can I go now?' I said 'No, we'll just wait.' And sure enough, when I pulled the trigger -- you've heard this said time and time again when you're standing in this winner's enclosure...when you pull the trigger and they go, they're good horses. Well, that's what got me here today."

Right: Helium in the post parade. Wilson added, "We talked about all the horses that we have, you know there's different ability levels and different competency levels and trainers are trying to balance that and make it work. But when you've got a horse that has the ability and the competency, they win stakes and they go on to do great things."