The first Sunday of Santa Anita's 2019-20 winter-spring meeting featured juveniles on the turf. Conditions were excellent once again, with the 9,997 fans in attendance enjoying sunny skies and temperatures in the low 60's, and the course remaining "good" due to the heavy rain on Thursday. 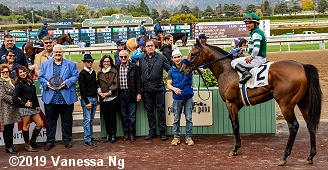 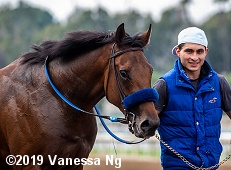 Left: Encoder in the winner's circle. Winning trainer John Sadler said, "He's been a little unlucky. In the Breeders' Cup Juvenile Turf Sprint (finished 6th) he had to check on the backside, he got beat a couple of lengths, turf racing can go like that. Joel rode his first winner in Southern California for us. I sent a horse to Golden Gate way back in the day and I said, ‘that kid really rode that horse well up there.' So when he came down we put him on some horses and we had a lot of good luck, we've won a lot of titles together at Del Mar and around. He's just a great rider and continued to improve. He's a real professional now in the middle of his career and he is doing great."

Right: Encoder heads back to the barn after the race. Winning jockey Joel Rosario said, "We had a perfect trip. It looked like those two horses on the lead were running pretty good and I just followed in behind them. John said to let this horse place himself, and that's what he did. When I asked him, he picked it up really nice." 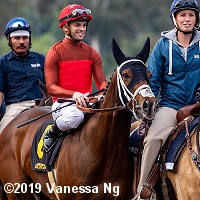 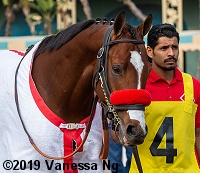 Right: Third place finisher Liar Liar in the paddock before the race. The Richard Baltas trainee improved his record to 1 win, 1 second, and 1 third in 5 starts, earning $52,288 for owner Calvin Nguyen. 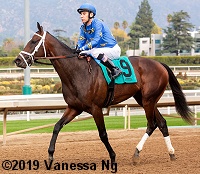 Fourth place finisher and beaten favorite Smooth Like Strait returns after the race. The Mike McCarthy trainee has a record of 2 wins, 0 seconds, and 1 third in 5 starts, earning $101,283 for owner-breeder Cannon Thoroughbreds.

The $75,000 Blue Norther Stakes featured a field of 9 two-year-old fillies also going 1 mile on the turf. Jimmy Durante Stakes (G3) runner-up Laura's Light was sent off as the 5-2 favorite over 4-1 Guitty, 8th in the Jimmy Durante, and 9-2 Croughavouke, 6th in the Breeders' Cup Juvenile Fillies Turf (G1). 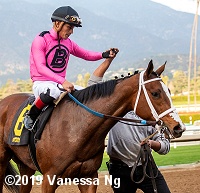 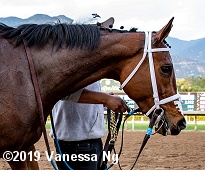 Left: Laura's Light heads to the winner's circle. Winning owner Gary Barber said, "I think this course is playing pretty quick but I think we slowed it down in race (2) and we were able to get an easy lead. Abel did a terrific job of just putting her on the lead and she was very relaxed. At the quarter pole when someone came to her she let out a notch and she was gone. 2019 was (Abel's) breakout year. A couple of Grade 1's or more, a terrific rider. Look at this setting, you have the San Gabriel Mountains in the background, it is The Great Race Place. The turf course is fantastic and the dirt course looks tremendous as well, we love it."

Right: Winning jockey Abel Cedillo said, "Pete (Miller, trainer) told me to play the break. It looked like there was other speed in there and if they went, he said to let them go and if they didn't, to go ahead and put her on the lead. So, my plan was to break and go!" 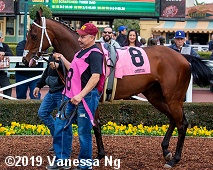 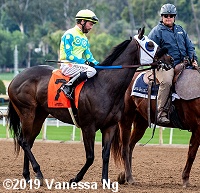 Left: Second place finisher Croughavouke in the paddock before the race. The Jeff Mullins trainee improved her record to 1 win, 3 seconds, and 1 third in 7 starts, earning $82,437 for owners Red Baron's Barn and Rancho Temescal.