Friday was Opening Day of Santa Anita's fall meeting, with the feature race the $200,000 Eddie D Stakes (G2) for older horses sprinting 5 1/2 furlongs on the turf course, named in honor of Hall of Fame jockey Eddie Delahoussaye. Conditions were typical for late September in Southern California, with sunny skies and temperatures in the high 80's. Big Runnuer was sent off as the 3-2 favorite in the field of 7 off 2 straight wins including the Siren Lure Stakes last out. In to challenge him included 5-2 second choice Wildman Jack, 4th in the Bing Crosby (G1), and 9-2 third choice El Tigre Terrible, winner of the Real Good Deal Stakes after finishing 11th in the Oceanside. 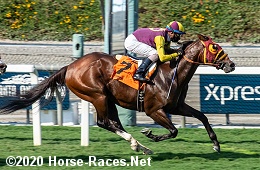 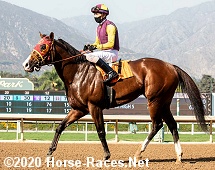 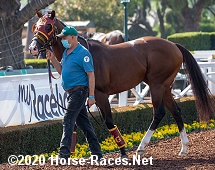 Left: Big Runnuer in the "winner's circle". Winning jockey Juan Hernandez said, "I had never ridden him, so I asked Ruben (Fuentes) what he knew about him. He told me he was a very nice horse with natural speed. It looked like we had some speed inside of us, so I thought we'd stay where we were at and stay comfortable. But he broke sharp and when we cleared them and got to the rail, it was over. At the top of the stretch, I asked him to change leads and it was no problem. He's a nice horse."

Right: Big Runnuer in the paddock before the race. Winning trainer Victor Garcia said, "He broke sharp (today), other times he was a jump or jump and a half slow, but this time he broke sharp and he took the lead so easily. I saw the first fraction at 21 (seconds) almost 22 and I said, ‘well, he's not going too fast.' With the blinkers on, he is more focused on the race." 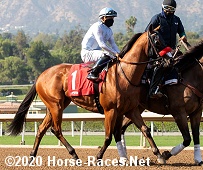 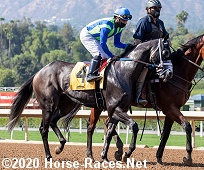 Right: Third place finisher Grit and Curiosity in the post parade. The Peter Miller trainee improved his record to 3 wins, 3 seconds, and 1 third in 9 starts, earning $205,024 for owners Kirk and Judy Robison. 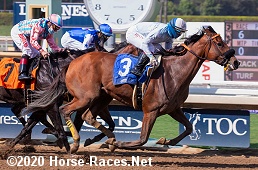 Kicking off the fall meet stakes schedule was the $100,000 Chillingworth Stakes (G3) for older fillies and mares sprinting 6 1/2 furlongs on the main track After 2 scratches, just 5 went to posty with Qahira sent off as the 7-10 favorite off 3 straight wins in allowance company. In to challenge her included 2-1 second choice Amuse, 2nd in the Rancho Bernardo Handicap (G3) at Del Mar, and 11-2 third choice Hang a Star, 3rd in the Tranquility Lake after finishing 4th in the Clement L. Hirsch (G1).

Jockey Luis Saez sent Qahira to the lead exiting the chute through fractions of 22.18, 44.94, and 1:09.51 while pressed by Amuse and stalked by 9-1 Into Chocolate. In the stretch Qahira led to the 1/8 pole but Into Chocolate and jockey Umberto Rispoli came out for room and outfinished the favorite to win by 3/4 length in 1:15.86. It was a neck back to Amuse third. 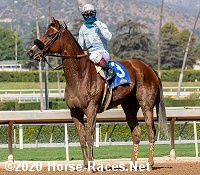 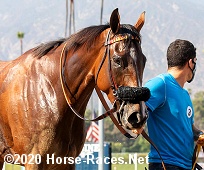 Left: Into Chocolate in the "winner's circle". Winning trainer Clifford Sise Jr. said, "We threw her last race at Del Mar out. She came out of that race body sore and then her blood count was off. She's been feeling really good here since we got back and I could tell saddling her today that she was doing good and she was ready. Those were some nice fillies and it's always good to win."

Right: Into Chocolate heads back to the barn after the race. Winning jockey Umberto Rispoli said, "I didn't know much about her, but Mr. Sise said she was doing really good and she should run a lot better than she did at Del Mar. It looked like they were going pretty fast in front and my filly was very professional." 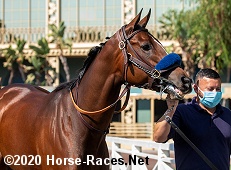 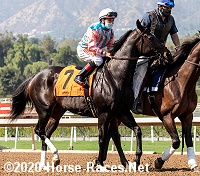 Left: Second place finisher and beaten favorite Qahira in the paddock before the race. The Bob Baffert trainee improved her record to 4 wins, 1 second, and 0 thirds in 7 starts, earning $158,960 for owner Baoma Corporation.