One of the last major races of the Woodbine thoroughbred season for older horses on the main track is the $150,000 Durham Cup (G3). A field of six went to the post while being pelted by a mixture of sleet, hail, and rain for this 1 1/8 mile feature over the Polytrack, with 5-year-old Gouldings Green sent off as the overwhelming 1-2 favorite off of a two-race winning streak in graded competition, winning the Seagram Cup at Woodbine and then the Turfway Park Fall Championship last time out. In to challenge him were 4-1 second choice Barracuda Boy, winner of 4 in a row in allowance company and making his first stakes appearance, and 9-2 third choice Devilment, third in his last start in an optional claimer.

When the gate opened, Barracuda Boy went right to the front and set a slow pace of 24.45 and 47.90 while as many as 2 1/2 lengths clear of the field. Roving Angel led the rest of the field with Devilment close behind. Favorite Goulding’s Green sat at the back of the pack saving ground around both turns. On the far turn, Barracuda Boy still held the lead through 3/4 in 1:11.84 and showed no signs of slowing down. Under confident handling by jockey Emma-Jayne Wilson, Barracuda Boy drew off in the stretch to win by 5 1/4 lengths over the late closing 20-1 Sextet, with 11-1 Pellegrino in third. Gouldings Green put in a mild rally but was left with too much to do, finishing fourth another 2 3/4 lengths back. The winning time was 1:50.49 over the “fast” Polytrack surface. 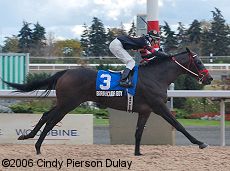 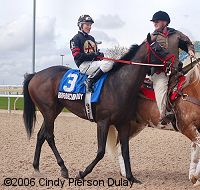 Jockey Emma-Jayne Wilson and Barracuda Boy return after winning the Durham Cup. Wilson, celebrating her fifth stakes win of the year, said, "It's a matter of confidence. They come from a streak of wins where they get their confidence. This is a game of confidence and he was successful. I was anticipating having some speed to stalk, but he broke sharp and put himself in his usual bowed neck position. Being on the front end, he relaxed for me and as we hit the backside, I was very content on where I was sitting." 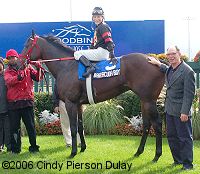 Barracuda Boy in the winner's circle. Winning trainer Nick Gonzalez said of the Stronach Stables homebred, "He's not an easy horse to train because he's such a big, robust, good-feeling horse. You've got to have a good rider on him at all times. He takes his training real well, though. I wasn't really concerned about his fitness. I was more concerned maybe about him being accompanied on the front end or close to the front end. That might have taken a bit out of him, but he was pretty fit going into the race." 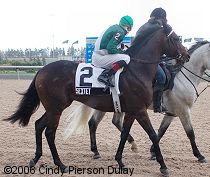 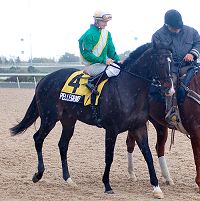 Left: Second place finisher Sextet in the post parade before the race.

You can see streaks in the photos from the hail that was falling during the post parade. Check out the way the jockeys and outriders are hunched over trying to keep it from hitting their faces. It really did hurt as the ice pellets were quite large. 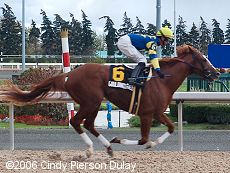