The $500,000 Donn Handicap (G1) at Gulfstream Park is the first major race of the year for the North American older horse division. A field of eight went to post in this 1 1/8 mile main track feature on Saturday afternoon, with Cigar Mile and Jerome winner Daaher sent off as the 4-5 favorite, making his first start of 2008. In to challenge the Kiaran McLaughlin trainee were 4-1 second choice A.P. Arrow, winner of the Clark Handicap at Churchill Downs in November, and 6-1 third choice Spring at Last, winner of two straight including the Godolphin Mile in Dubai last March.

Daaher went to the lead immediately under jockey Mike Luzzi, battling with 46-1 longest shot Kiss the Kid to his inside through fractions of 22.95, 46.26, and 1:09.72 over the fast track. Spring at Last sat in stalking position 3rd early, while A.P. Arrow was unhurried near the back of the field down the backstretch. Midway on the far turn, Daaher tired from the heavy pace pressure of Kiss the Kid, while Spring at Last came out to pass the pacesetters, taking over the lead at the 1/4 pole. Spring at Last opened up a 1 1/2 length lead on Kiss the Kid at the 1/8 pole, after a mile in 1:34.85, but A.P. Arrow came out 4 wide into the lane and put in a very strong late rally. Spring at Last was all-out in the final strides to hold him off by just 1/2 a length in a running time of 1:48.35. It was another 2 1/2 lengths back to Kiss the Kid third, while Daaher faded late to finish seventh. 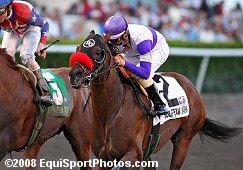 Winning jockey Eibar Coa said, "He broke perfect from the gate, but I was a little worried because he was a little sharp at the beginning. He was about a half-length too close, but then he came back to me. I found my way out on the turn and just let him be. Then he took the lead in the stretch. This was the first time I’ve ridden this horse since he just shipped in from California. He (trainer Doug O’Neill) told me that he would be sharp and to try to get him back and then let him be, just like it happened."

Winning trainer Doug O'Neill said, "We were so excited because he had been training really, really well. He had always shown us he was versatile and obviously Eibar rode a great race. We all needed to see (that performance) before he stamped himself a classic distance horse. When he trains in the morning he just doesn’t get tired, but there are a lot (of horses) like that. When you put them in the afternoon (race), they don’t hold that up under competition. We don’t know which race (Mile or World Cup) in Dubai we want right now. We’ll talk it over with the owners, decide a strategy and play it by ear." 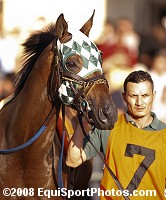 Left: Second place finisher A.P. Arrow. His jockey Ramon Dominguez said, "It set up perfectly for us. I would have liked to have been a little closer, but they were going pretty quick. He made me work today, but he came running and just ran out of room."

Right: Third place finisher Kiss the Kid. Kiss the Kid pressed the pace of favored Daaher, gained a brief lead midway around the far turn under jockey Eddie Castro, then weakened late, holding off Brass Hat by a nose to get third place money. He improved his record to 5 wins, 1 second, and 3 thirds in 18 career starts, earning $295,467 for owner-trainer Amy Tarrant.


The undercard feature on Saturday was the $150,000 Swale Stakes (G2) for 3-year-olds, and a traditional early prep for Triple Crown hopefuls. A field of seven sprinted 6 1/2 furlongs on the main track, with maiden winner Wincat sent off as the 3-2 favorite in just his second lifetime start, over 5-2 Silver Edition, runner-up in the Hutcheson last time out, and 4-1 Eaton's Gift, seventh in the CashCall Futurity at Hollywood in December.

Eaton's Gift showed speed along the inside and led the field down the backstretch through a quarter in 21.99 and a half in 44.20, while being challenged by Wincat to his outside. Entering the lane, jockey Kent Desormeaux asked Eaton's Gift for run and got it, as he opened up a 4 length lead in midstretch. 57-1 outsider Surrealdeal, who raced in sixth early, put in a strong rally late to get second by a neck from Wincat, but the race belonged to Eaton's Gift who cruised under the line 3 1/2 lengths clear in a time of 1:15.63. It was another 3 1/2 lengths back from Wincat to Silver Edition in fourth. 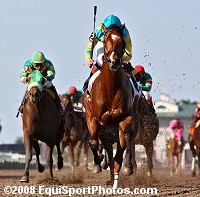 Winning jockey Kent Desormeaux said, "Dale (Romans) told me to take advantage of the inside post. He bounded from the gate and took the lead. No one gave it to him, he just took it. He was very comfortable there. Normally, when a horse turns back (in distance), you’re concerned if they’ll be void of speed. He was very fast today. I wasn’t concerned about (Surrealdeal) closing in on me; I was watching TV (infield board) the last 1/8 mile."

Winning trainer Dale Romans said, "He’s a fast horse and from the 2 post we pretty much had to go (lead). We didn’t want to get him covered up. We had to ship and didn’t really have a lot of time to train for two turns like would we would if the race was back home. I’m not sure what’s next. When you have a fast 3-year-old at this time of the year, you always think about stretching them out. We’ll talk to Mr. (owner Ahmad) Zayat and then come up with a plan."