The traditional stakes event on Canada Day at Woodbine is the $200,000 Dominion Day Stakes (G3), featuring the top older horses on the grounds going the classic distance of 1 1/4 miles on the Polytrack. After a mostly sunny day, clouds rolled in for the feature but the day was ideal for racing, with temperatures around 70. A field of 8 went to post on Wednesday afternoon, with Phipps Stable homebred Vacation sent off as the 9-10 favorite, coming off a win in the Hanshin Handicap at Arlington Park on May 23. In to challenge him included top local hope and 3-1 shot Marchfield, second in the Eclipse Stakes last time out after returning from Santa Anita, and 6-1 third choice Ice Bear, who defeated Marchfield by a neck in the Eclipse last out.

Jockey Chantal Sutherland sent Ice Bear to the front first time past the stands and he got the initial quarter mile in 24.35 seconds, with 9-1 Approval Rating giving chase in second. On the clubhouse turn, jockey Jim McAleney sent Approval Rating to the front. Ice Bear sat a length behind as Approval Rating set a reserved pace of 49.22, 1:14.78, and 1:39.15 down the backstretch and around the far turn. Entering the stretch, Ice Bear tired and faded from contention, allowing Approval Rating to open up a 3 length lead with a furlong to go. However, Marchfield, who was at the back of the field for the first mile, put in a strong rally the length of the stretch to pass Approval Rating at the 70 yard pole to win going away by 1 3/4 lengths in a time of 2:03.63, just 0.12 seconds off Like A Gem's track record. It was another 2 1/4 lengths back to late-running favorite Vacation third. 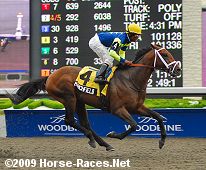 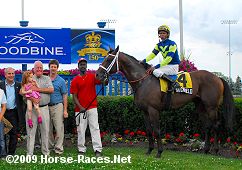 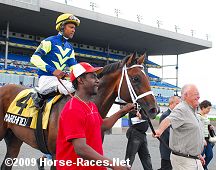 Left: Marchfield in the winner's circle with trainer Mark Casse on the far left. Casse said, "When he's idle for a little while, he loses his racing edge. It doesn't matter what you do with him, you can't get it back. If you look at his races in California, he got beat 4 or 5 lengths by a horse that won the Dubai World Cup (Well Armed). He's a nice horse and a mile and a quarter might be his distance. We may try again south of the border." 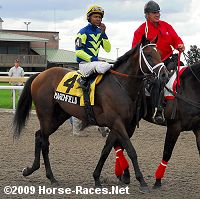 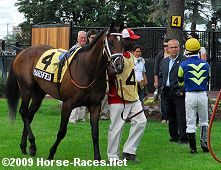 Left: Marchfield returns after the race. 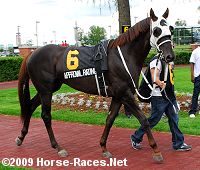 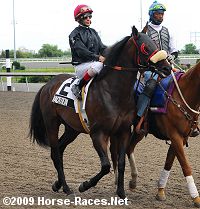 Left: Second place finisher Approval Rating in the paddock before the race. The 9-1 shot set the pace most of the way under regular rider Jim McAleney, opened up a 3 length lead at the 1/8 pole but failed to contain the winner late. The Terry Jordan trained son of Lemon Drop Kid improved his record to 4 wins, 2 seconds, and 3 thirds in 14 starts, earning $317,933 for owner Peter Redekop B.C. Ltd.

Right: Third place finisher Vacation in the post parade. The 9-10 favorite rated in sixth early on under regular rider John Velazquez, came out 4 wide for the drive to pass tiring horses but evened out late, finishing 3rd beaten 4 lengths at the line. The Shug McGaughey trained son of Dynaformer improved his record to 3 wins, 5 seconds, and 8 thirds in 20 starts, earning $249,663 for owner-breeder Phipps Stable.


Earlier in the card, a field of 6 older fillies and mares sprinted 7 furlongs in the $100,000 Sweet Briar Too Stakes. Verdana Bold, second in the Satin N Lace Stakes at Presque Isle Downs last time out, was sent off as the 7-5 favorite over 3-1 second choice Simply Splendid, winner of two allowance events going into her first stakes start, and 7-2 third choice Executive Flight, fourth in the Ballade last out. Morning line favorite Authenicat scratched the morning of the race. 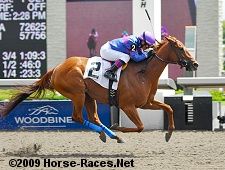 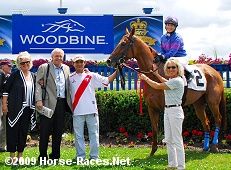 Simply Splendid in the winner's circle. Her trainer and co-owner Gail Cox said, "She fractured an ankle behind (last May). We weren't quite sure we could get her back to the races. It was one of those injuries where you're just not sure. She's come back great. She's really maturing. I would like to try her on the turf. With her pedigree and the way she moves, she'll probably like the grass. With her doing so well, we haven't had time to change." 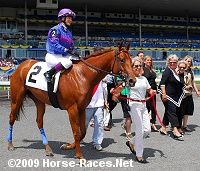 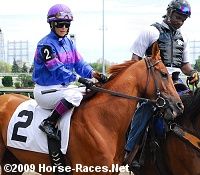 Right: Simply Splendid in the post parade. Her jockey Chantal Sutherland said, "It's really exciting. She relaxed really nice. She accelerated beautifully. I'm really proud of her today. She's turned into a really nice filly. I'm grateful to be on her." 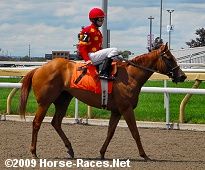 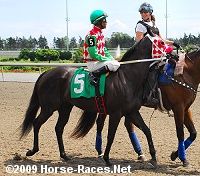 Left: Second place finisher and beaten favorite Executive Flight returns after the race. The 7-2 second choice stalked the pace under new rider Patrick Husbands, was roused at the top of the lane and finished well to get second beaten 5 3/4 lengths. The Darwin Banach trainee improved her record to 8 wins, 8 seconds, and 6 thirds in 32 starts, earning $678,408 for owner-breeder William Sorokolit.

Right: Third place finisher and beaten favorite Verdana Bold in the post parade. The 7-5 favorite set a reserved pace under regular rider Tyler Pizarro, was all out in the stretch but was no match for the winner, weakening late. The Dan Vella trainee improved her record to 4 wins, 2 seconds, and 1 third in 12 starts, earning $335,980 for owner Edward Seltzer. 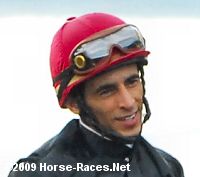 One race after the Dominion Day Stakes, jockey Robert Landry reached milestone win #2000 aboard 12-1 longshot Firetheexecutive in a 7 furlong, $62,800 allowance race for Ontario-sired older horses. The race was overdrawn with 16 starters but with two scratches due to the race being taken off the turf, Landry's mount, who drew 16, was able to start. Landry said, "I treated it as though it were any other day. It's really nice to win this. My mindset was, 'When it comes, it comes.' I'm happy I won it for Steve (Attard, trainer and co-owner). I've ridden a lot for him in the past. Now that it's over with we'll go out there and try to get some more."

A two-time Sovereign Award winner as Canada's top jockey in 1993 and 1994, Landry won his first race on June 21, 1981, with Hammy Hubert at Fort Erie. Landry has won several big races throughout his career, including the 1999 Woodbine Mile with Quiet Resolve and the 2004 Queen's Plate with Niigon. He has 160 lifetime stakes scores, including 25 graded. The 2003 Avelino Gomez Memorial Award winner donates his time to various children's charities, including C.A.R.D. and the Special Olympics. He is also a board member for the LongRun Thoroughbred Retirement Society.