Del Mar's summer meeting ended on Sunday with the traditional closing day feature, the $300,000 Runhappy Del Mar Futurity (G1) for 2-year-olds sprinting 7 furlongs on the main track. Del Mar's CEO Joe Harper said, "Just an incredible meet on all levels. All season long the racing was ultra-competitive and extremely safe. Our racing office, led by Tom Robbins and David Jerkens, was phenomenal. We're also very appreciative of the support we received from our fans and our players both here on track and all across the country." Gary Fenton, chairman of the Thoroughbred Owners of California added, "This meet is the culmination of a year-long plan to revitalize California racing and return it to its rightful place as one of the best circuits in America. A big thank you to our partners at DMTC and our members. Without owners there is no California racing and they continue to make a strong statement that Del Mar is their favorite place to be."

Conditions were excellent at the seaside oval with sunny skies and temperatures in the low 80's for the 6,989 fans in attendance. Cave Rock was sent off as the 2-5 favorite in the field of 9 off his 6 length debut win on August 13. In to challenge him included 13-2 second choice Havnameltdown, winner of the Best Pal Stakes (G3), and 7-1 third choice Newgate, a debut winner on July 30.

Jockey Juan Hernandez sent Cave Rock to the lead exiting the chute through fractions of 21.56 and 43.65 while pressed by Havnameltdown and stalked by Newgate. Turning for home, Cave Rock opened up a 1 1/2 length lead through 3/4 in 1:08.55. Kept to task by Hernandez, Cave Rock drew off to win by 5 1/4 lengths over Havnameltdown in 1:20.99. It was another 4 1/4 lengths back to late-running 13-1 Skinner third. 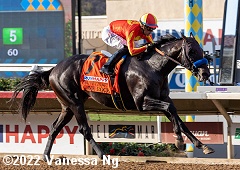 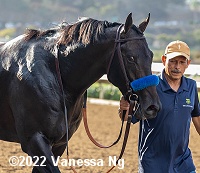 Left: Cave Rock in the winner's circle. With the victory, trainer Bob Baffert tied with Phil D'Amato for the meet's training title with 19 wins. Assistant trainer Jimmy Barnes said, "Very nice. Ran fast. Did exactly what he needed to do. Broke out of the gate good, no complications and just opened up. In these races you have to play the break and Juan took advantage of it and never looked back. Look at the fractions, :21, :43, 1:08, 1:20. That's race horse time."

Right: Cave Rock heads back to the barn. 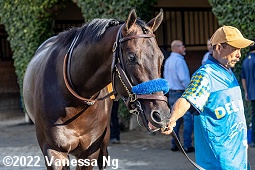 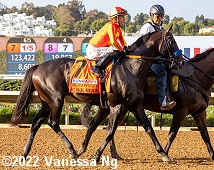 Left: Cave Rock in the paddock before the race. Winning jockey Juan Hernandez, who won the meet's riding title with 49 wins said, "He's a good horse; very professional. And he's fast. He broke a step slow, but then he got right in gear and made the running. I tried to slow him down some, but he wasn't having it. So I just let him go on and do his thing. When we hit the quarter pole, I asked him and he changed leads and took off. He just wanted to go. He's something." 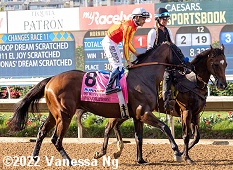 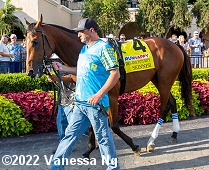 Left: Second place finisher Havnameltdown in the post parade. Jockey Mike Smith said, "He's (Cave Rock) a beast. I gave myself a chance to be with him but he just took off."


The $100,000 Del Mar Juvenile Turf Stakes (G3) featured a full field of 14 two-year-olds going 1 mile on the Jimmy Durante turf course. Dandy Man Shines was sent off as the lukewarm 4-1 favorite off his fourth place finish in the JRA Vintage Stakes (G2) at Goodwood in England. In to challenge him included 9-2 second choice Tahoma, second in the Fasig Tipton Futurity at Santa Anita, and 11-2 third choice Don'tthinkjustdoit off his debut win on August 11.

Jockey Abel Cedillo sent 13-2 fourth choice Ah Jeez to the lead first time by through fractions of 23.00 and 47.24 while pressed by 8-1 Packs a Wahlop and stalked by 12-1 Wound Up and 14-1 Park City. Turning for home Packs a Wahlop gained a short lead through 3/4 in 1:12.32. Kept to task by jockey Mike Smith, Packs a Wahlop drew off late to win by 4 1/4 lengths over late-running Don'tthinkjustdoit in 1:35.96. It was another length back to 34-1 Valiancer third, and a head more to late-running favorite Dandy Man Shines fourth. After a stewards' inquiry, Don'tthinkjustdoit was disqualified from second and placed seventh for drifting out at the 1/16 pole and causing a chain reaction between Wound Up (finished 7th), De La Luna (6th), and Dandy Man Shines. 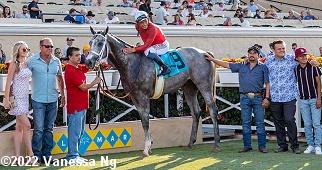 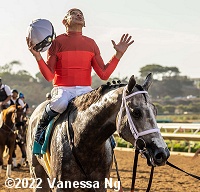 Left: Packs a Wahlop in the winner's circle. Winning trainer Jeff Mullins who swept the trifecta (after the DQ) said, "That was kind of the plan along. He showed speed going five-eighths; we figured he would be laying close somewhere in a comfortable position. Mike's worked him every time and he's had all the confidence in this horse, we all have. I was surprised he went off at 8-1."

Right: Mike Smith celebrates aboard Packs a Wahlop. Winning jockey Mike Smith said, "Jeff and his crew did a great job getting this colt ready for this race. They were actually only going to run the other one (Valiancer) and this horse was doing so good Jeff said we got to run them both. He's (Pack a Wahlop) training unbelievable and I came out and worked him every time, so I feel like I was a part of it. I didn't think they were going to beat this colt, not today anyway. Nice comfortable pace and he had plenty left. " 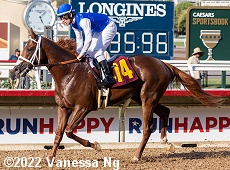 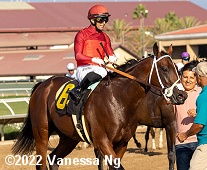 Right: Third place finisher and beaten favorite (moved up from 4th via DQ) Dandy Man Shines returns after the race. The Jeff Mullins trainee improved his record to 0 wins, 0 seconds and 2 thirds in 3 starts, earning $24,654 for owners Red Baron's Barn and Rancho Temescal.