Labor Day marks the end of the Del Mar summer meet, with racing returning in the fall for the Bing Crosby Season including the Breeders' Cup Championships. The traditional closing day feature is the $250,000 Del Mar Futurity (G1) for 2-year-olds sprinting 7 furlongs on the main track. Conditions were excellent at the seaside oval with sunny skies and temperatures in the low 70's for the 6,824 fans in attendance. Murray was sent off as the 3-5 favorite in the field of 6 off his 10-length debut win on July 25. In to challenge him included 4-1 second choice Pinehurst, a debut winner on August 1, and 9-2 third choice Pappacap, winner of the Best Pal Stakes (G2).

Jockey Mike Smith sent Pinehurst to the lead exiting the chute through fractions of 22.09 and 44.77 while pressed by Murray and stalked by 5-1 fourth choice American Xperiment. Turning for home, Murray tired as Pinehurst opened up a 3 length lead through 3/4 in 1:10.17. Kept to task by Smith, Pinehurst drew off late to win by 4 1/2 lengths over late-running 38-1 Finneus in 1:23.55. It was another 1/2 length back to American Xperiment third. 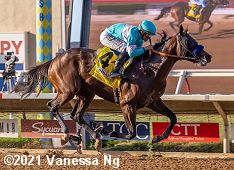 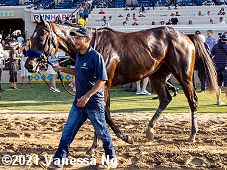 Left: Pinehurst in the winner's circle. Winning trainer Bob Baffert said, "I'm just glad that I had two good horses and one of them had it even if the other one (beaten favorite Murray) didn't. I've been blessed over the years with so many good owners and so many good young horses."

Right: Pinehurst heads back to the barn. Winning jockey Mike Smith said, "When we ran last time, he stumbled pretty badly coming out of there, but he still made the lead. So I knew he was plenty quick. We beat a horse that day (August 1) named Enbarr and I knew they were real high on him. So I figured I was sitting on a good horse." 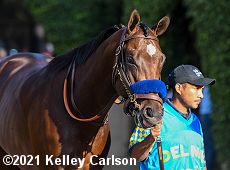 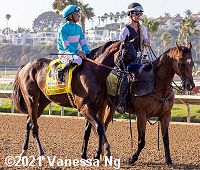 Left: Pinehurst in the paddock. Smith added, "When you ride for Bob, you ride with confidence. He puts so much foundation under them and they all come running. So glad I got to win a stakes at Del Mar; and best to do it with a Grade 1."

Right: Pinehurst in the post parade. Baffert added, "Mike Smith broke his maiden, so it was natural to have him back. He's a great rider and you give him a live one he knows what to do." 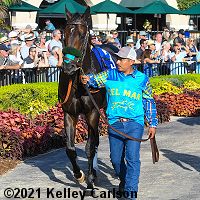 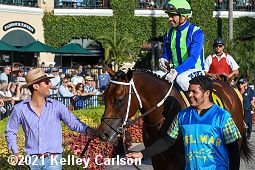 Left: Second place finisher Finneus in the paddock before the race. The Walther Solis trainee improved his record to 1 win, 2 seconds, and 1 third in 4 starts, earning $146,116 for owners Naseer Mohammed Fasihuddin, Terry Lovingier, and Amanda Navarro. 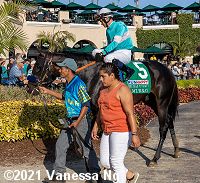 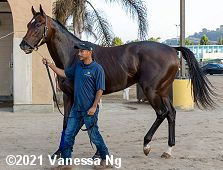 Left: Fifth place finisher and beaten favorite Murray in the paddock. Trainer Bob Baffert said, "I could see that Murray didn't have it today. He was struggling early on."

Right: Pinehurst back at the test barn.


The $100,000 Del Mar Juvenile Turf Stakes featured a field of nine 2-year-olds going 1 mile on the Jimmy Durante turf course. Maiden winner Mackinnon was sent off as the 8-5 favorite over 2-1 second choice Optimising, a debut winner last out at Wolverhampton in England, and 4-1 third choice Silver Surfer, a maiden winner at 5th asking last out at Fairyhouse in Ireland. 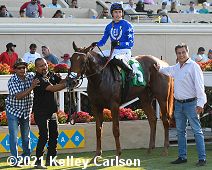 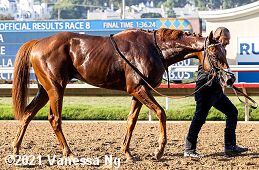 Left: Mackinnon in the winner's circle. Winning trainer Doug O'Neill said, "He broke his maiden (July 31) in a manner that we were hoping this day would come but you never know. So much credit to the owners being so patient and Juan being so patient with this colt. I was a little bit concerned as the race unfolded. I knew that (Optimising) was the X-factor. I knew he was in from Europe and had been working well and had great connections and was in a great spot. But when Juan called on MacKinnon and he responded I started smiling. If he stays injury free the (Breeders' Cup Juvenile Turf) is the goal."

Right: Mackinnon heads back to the barn. Winning jockey Juan Hernandez said, "Doug just basically told me to ride him with confidence. We were doing OK until we got to the far turn and I felt him get a little lazy on me. So when we went for home and he changed leads, I hit him left-handed with the stick on time and he jumped back into it. From there we just went on with it. He's a nice horse and the way he finished out today, I think he'll like to run on."