Labor Day marks the end of the Del Mar summer meet, the entirety of which was run with no spectators. The feature race on closing day is the $250,000 Del Mar Futurity (G1) for 2-year-olds sprinting 7 furlongs on the main track. In contrast to Sunday's heat, it was considerably cooler with clear skies and temmperatures in the mid 70's. Dr. Schivel was sent off as the 7-5 favorite in the field of 6 off his maiden win at third asking on August 8. In to challenge him included 2-1 second choice Dixie's Two Cents, a close second in his debut on August 1, and 3-1 third choice Spielberg, 2nd behind Dr. Schivel in his debut.

Jockey Abel Cedillo sent Spielberg to the lead out of the chute through fractions of 22.49 and 45.14 while pressed by Dr. Schivel and stalked by 11-2 fourth choice Weston. Entering the stretch jockey Flavien Prat sent Dr. Schivel to challenge through 3/4 in 1:10.79. Kept to task by Prat, Dr. Schivel drew off to win by 1 3/4 lengths in 1:24.16. It was another 3 3/4 lengths back to Weston third. 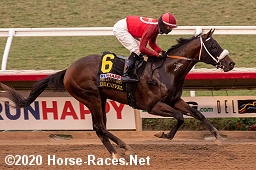 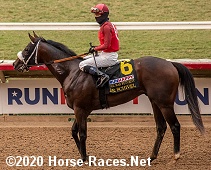 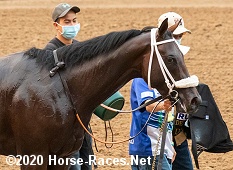 Left: Dr. Schivel in the "winner's circle". Winning trainer Luis Mendez said, "I loved the way he was moving (down the backstretch); he looked comfortable. And around the turn it looked like he had a lot of horse so I felt really good. And he got it done. I'm very proud of myself and the team for what we've done getting him to win this race. Now (that the horse is being transferred to another trainer) I thank the owners for giving me this horse and I've got to go back home and start breaking babies for them. I don't have any other feeling than that."

Right: Dr. Schivel heads back to the barn. Winning jockey Flavien Prat said, "He broke well, then he got a little aggressive on me. I tried to give him a little breather on the turn, then when I asked him he was a runner. He's a nice colt. If that's how I win the riding title (50th win of the meet), then that's great. At least now I know I can't get beat. However it turns out, it was good competition. Umberto (Rispoli, runner-up for the title with 49 wins) is a real competitor and an excellent rider. It was great to go against him." 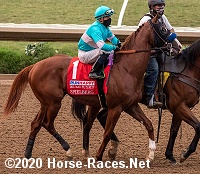 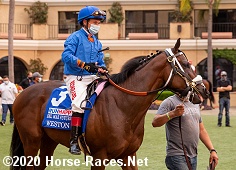 Right: Third place finisher Weston in the paddock. The Ryan Hanson trainee improved his record to 2 wins and 1 third in 3 starts, earning $150,000 for owners Chris Drakos and Ryan Hanson.


The $100,000 Del Mar Juvenile Turf Stakes featured a field of ten 2-year-olds going 1 mile on the Jimmy Durante turf course. Get Her Number was sent off as the 3-1 favorite off his debut win on August 14. In to challenge him included 4-1 second choice Rombauer, winner of his debut on July 25, and 9-2 third choice Big Fish, winner of a maiden at third asking on August 21.

Jockey Flavien Prat sent Get Her Number to the lead first time by through fractions of 24.00, 49.32, and 1:14.71 while pressed by 5-1 fourth choice Ambivalent and stalked by 14-1 Herd Immunity. Turning for home Get Her Number continued to lead through 1 mile in 1:25.73 but Big Fish, 6th early under Victor Espinoza, rallied three wide and held off 12-1 Ebeko to win by a length in 1:38.21. It was just a nose back to Ambivalent third and another nose to favorite and pacesetter Get Her Number fourth. 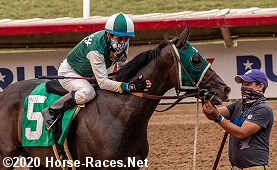 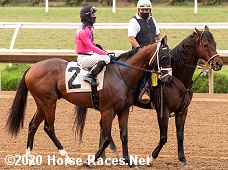 Left: Big Fish in the "winner's circle". Winning jockey Victor Espinoza said, "I had a good trip. The only problem I had was on the far turn when I dropped my hands just a bit and he took off. He almost ran up on the heels of the horse in front of us. But I checked him and wheeled him out. He swerved just a bit in the stretch, but nothing big. You know the kind he is; if they make the lead they get lonely out there and they want to wait for other ones to come and play."

Right: Fourth place finisher and beaten favorite Get Her Number in the post parade.