The feature event on Saturday of closing weekend of the Del Mar summer meeting was the $300,000 TVG Del Mar Debutante Stakes (G1) for top 2-year-old fillies on the west coast sprinting 7 furlongs on the main track. Conditions were typical for early September in San Diego County with the 7,253 fans in attendance enjoying sunny skies and temperatures in the mid 70's. Home Cooking was sent off as the 7-10 favorite in the field of 7 off her 9 1/4 length maiden win at second asking last out. In to challenge her included 9-2 second choice Vegas Magic, undefeated in 3 starts including the Sorrento Stakes (G2), and 5-1 third choice Ice Dancing, third in her debut on August 14.

65-1 longest shot Arella Star was quickest away through an opening quarter of 22.01 before dropping back to last, allowing Home Cooking to take over on the far turn through a half in 44.36. Home Cooking opened up a 3 length lead through 3/4 in 1:09.92 but 9-1 And Tell Me Nolies, sixth early under Ramon Vazquez, came out three wide for room and rallied to win by a head in 1:23.29. It was another 3 3/4 length back to Ice Dancing third. 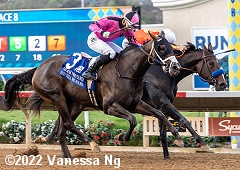 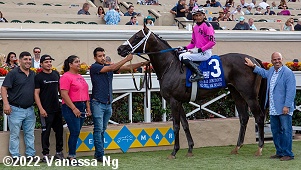 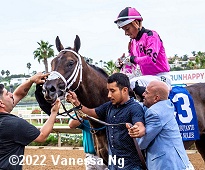 Left: And Tell Me Nolies in the winner's circle. Winning trainer Peter Miller said, "I didn't see a ton of speed on the form. We were drawn inside. I think (Ramon Vasquez) wanted to get position, which he did. I did like some of the moves he made. At the 5/8 pole when he beat Cedillo (Vegas Magic) to the spot, and then when he got her outside around the 2 1/2 furlong pole, I felt really good."

Right: And Tell Me Nolies with her connections after the race. 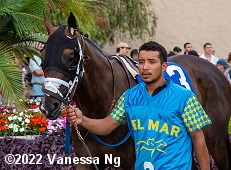 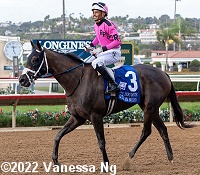 Left: And Tell Me Nolies in the paddock before the race. Winning jockey Ramon Vazquez said, "I told Peter that I had confidence in this filly right from the start. I'm glad he was loyal to me and let me ride her in this one. She was a runner all the way today. And I knew I was the winner at the wire. This is my first Grade 1 win. It is so amazing. I want to thank Peter for giving me this chance. This is amazing."

Right: And Tell Me Nolies returns after the race. 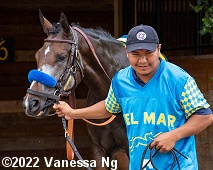 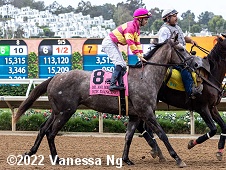 Left: Second place finisher and beaten favorite Home Cooking in the paddock before the race. The Bob Baffert trainee improved her record to 1 win, 1 second, and 1 third in 3 starts, earning $117,600 for owners Mike Pegram, Karl Watson, and Paul Weitman.


The second feature race on Saturday at Del Mar was the $250,000 John C. Mabee Stakes (G2) for older fillies and mares going 1 1/8 miles over the Jimmy Durante turf course. Yellow Ribbon Handicap (G2) winner Going Global was sent off as the 1-2 favorite in the field of 7. In to challenge her included 5-2 second choice Going to Vegas, second in the Gamely (G1), and 11-1 third choice Avenue de France.

Jockey Hector Berrios sent 17-1 Park Avenue to the lead exiting the chute through fractions of 23.73, 46.53, and 1:11.00 while pressed by 42-1 longest shot Burgoo Alley and stalked by Going Global and Going to Vegas. Turning for home Park Avenue tired badly as Avenue de France, 5th early under Juan Hernandez, found room to gain the lead through 1 mile in 1:35.50. Kept to task by Hernandez, Avenue de France held off the late-closing favorite Going Global to win by 1/2 a length in 1:47.96. It was another 2 1/2 lengths back to Going to Vegas third. 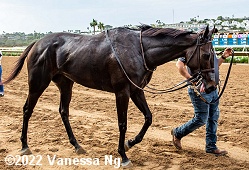 Left: Avenue de France in the winner's circle. Winning trainer Leonard Powell said, "She's on her game. She's got a very good turn of foot. She caught Going Global flat footed at the three-eighths and when Going Global came at her she re-rallied. I thought (Juan Hernandez) had moved too early, honestly, but it turned out to be the winning move. That's why Juan is at the top of the ladder right now."

Right: Avenue de France heads back to the barn. Winning jockey Juan Hernandez said, "This filly always moves the last quarter of the race, but today I took my chance and went around at the half mile. She was pulling and it looked like she wanted room, so I saw the opportunity to go around and make my move a little early today. Nothing caught us at the 3/8 and I took my chance. If I was going to get caught, I would have gotten caught at the wire. Good thing my filly held on through that move and won." 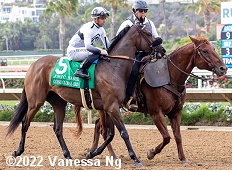 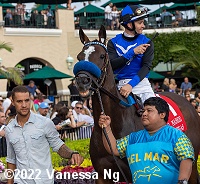 Right: Third place finisher Going to Vegas in the paddock before the race. The Phil D'Amato trainee improved her record to 7 wins, 11 seconds, and 3 thirds in 27 starts, earning $809,151 for owners Abbondanza Racing, Medallion Racing, and MyRacehorse.


Immediately before the Debutante was the $100,000 Del Mar Juvenile Fillies Turf featuring a field of 11 two-year-old fillies going 1 mile on the turf. Thebestisyettobe was sent off as the 2-1 favorite off her debut win at Gowran Park in Ireland, over 9-4 second choice Comanche Country, a maiden winner at third asking, and 4-1 third choice Havana Angel, third in the Prix du Bois (G3) at Chantilly in France.

Jockey Ricardo Gonzalez sent 13-1 Sally's Sassy to the lead first time by through fractions of 22.68, 46.13, and 1:11.08 while pressed by 22-1 Excelia and stalked by 64-1 longest shot Cahuilla. turning for home Sally's Sassy tired allowing Excelia to gain the lead tjhrough 7f in 1:23.92. Comanche Country, fifth early under Umberto Rispoli, came out 4 wide and rallied to win by 1 1/4 lengths over 10-1 fourth choice Sell the Dream in 1:35.97. It was another 1 1/4 lengths back to Excelia third, while favorite Thebestisyettobe trailed throughout and failed to rally finishing 8th beaten 5 1/4 lengths. 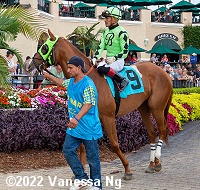 Left: Comanche Country in the winner's circle. Winning trainer Phil D'Amato said, "She just looked like she was in the right spot. They were winging it up there and (Umberto Rispoli) looked like he was in perfect position to strike on the outside. He pressed the button and she turned it on. If she can give me another good run at Santa Anita, I'd definitely consider something like the Breeders' Cup, one of the juvenile turf races." Jockey Umberto Rispoli added, "I was very confident, I feel no pressure on the backside, so I take my time and I knew I had a lot of horse underneath. Once I press the button she kept on. Once she reached the front she was waiting from other horses. I think she'll be even better at 3-years-old, once she really builds muscle and grows her mind." 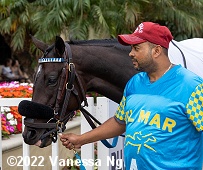 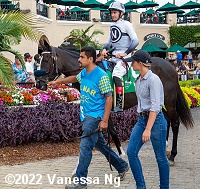 Left: Third place finisher Excelia in the paddock before the race. The Phil D'Amato trainee improved her record to 1 win, 0 seconds, and 1 third in 6 starts, earning $24,781 for owner R Unicorn Stable.

Right: Eighth place finisher and beaten favorite Thebestisyettobe heads out of the paddock. The Phil D'Amato trainee has a record of 1 win in 2 starts, earning $15,567 for owners CYBT, Omar Aldabbagh, Michael Nentwig, and Ray Pagano.