The feature event on Sunday of closing weekend of the Del Mar summer meeting was the $300,000 TVG Del Mar Debutante Stakes (G1) for top 2-year-old fillies on the west coast sprinting 7 furlongs on the main track. Conditions were typical for early September in San Diego County with the 8,963 fans in attendance enjoying sunny skies and temperatures in the low 70's. Eda was sent off as the 6-5 favorite in the field of 8, still a maiden but finished 2nd in both her starts, her debut at Santa Anita and the Sorrento Stakes (G2) at Del Mar. In to challenge her included 7-2 second choice Dance to the Music off her debut win, and 4-1 third choice Elm Drive, undefeated in her 2 starts including the Sorrento.

Elm Drive and Eda dueled for the lead out of the chute and down the backstretch through fractions of 21.78 and 44.37 while stalked by Dance to the Music and 31-1 Rock the Belles. Turning for home, the pace battle took its toll on the front runners as both tired, while 9-2 fourth choice Grace Adler, 6th early under Flavien Prat, came out 5 wide to sweep to the lead through 3/4 in 1:10.75. Kept to task by Prat, Grace Adler powered away late to win by 11 1/4 lengths over Dance to the Music in 1:23.76. It was another 2 3/4 lengths back to 28-1 Bicameral third. 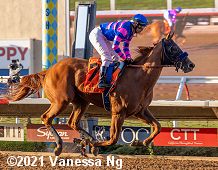 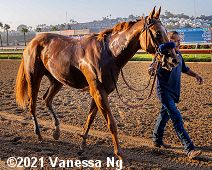 Left: Grace Adler in the winner's circle. Winning trainer Bob Baffert said, "Grace Adler is a really good filly and when she started to make her move (from sixth) you could tell by Trevor Denman's voice that she was really making up the ground. They're both good fillies, it's just too bad that (Eda) got caught up in a speed duel. It was set up for (Grace Adler)."

Right: Grace Adler heads back to the barn after the race. 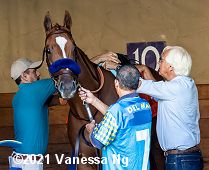 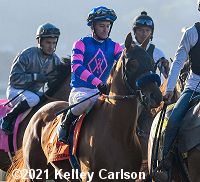 Left: Grace Adler gets saddled in the paddock before the race. Winning jockey Flavien Prat said, "No special instructions for me. Bob just told me that she wasn't as fast as the other fillies, but that she'd come running. He was certainly right. It might have looked like I moved too early with her, but it was more a case of them coming back to me. We were going forward and they were coming back." 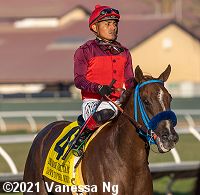 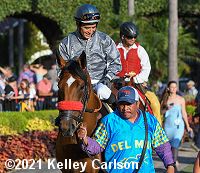 Left: Second place finisher Dance to the Music returns after the race. The Mark Glatt trainee improved her record to 1 win and 1 second in 2 starts, earning $102,000 for owners Red Baron's Barn and Rancho Temescal.

Right: Third place finisher Bicameral in the paddock before the race. The Richard Baltas trainee improved her record to 1 second and 1 third in 2 starts, earning $50,000 for owner Calvin Nguyen. 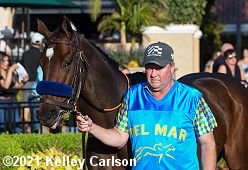 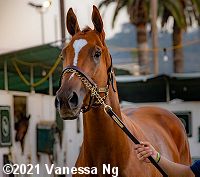 Left: Fifth place finisher and beaten favorite Eda in the paddock. Trainer Bob Baffert said, "I wasn't happy with (Eda's) position early because they were going way too fast up front."

Right: Grace Adler back at the test barn later in the day.


Immediately before the Debutante was the $100,000 Del Mar Juvenile Fillies Turf featuring a field of 11 two-year-old fillies going 1 mile on the turf. Maiden winner Helens Well was sent off as the lukewarm 3-1 choice over 7-2 second choice Into Touring, also a maiden winner last out, and 11-2 third choice Dendera, a maiden winner at second asking against California-breds and moving into open company here. 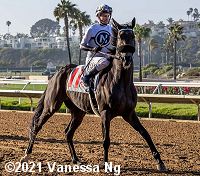 Left: Liam's Dove in the winner's circle. Winning trainer Peter Miller said, "I'm speechless. A 30-1 shocker. Kyle (Frey) is a good speed rider, but I didn't think we would be on the lead. I thought some horses would go and we'd be sitting second or third. But Kyle got the lead and put them to sleep. He played it and played it. We tried to run her in a maiden race and didn't get in, it overfilled. We didn't want to wait to Santa Anita to run her again, so this was kind of a second option. I asked Mr. (Gary) Barber if it would be OK to run here and he said yes."