The feature event on Sunday afternoon at Del Mar was the $250,000 Del Mar Debutante Stakes (G1) for top 2-year-old fillies on the west coast sprinting 7 furlongs on the main track. It was unusually hot for the end of the Del Mar summer meeting, with clear skies and temperatures in the mid 90's earlier in the day. Princess Noor was sent off as the 7-10 favorite in the field of 6 off her debut win on August 22. In to challenge her included 7-2 second choice My Girl Red, winner of the Sorrento (G2), and 4-1 third choice Forest Caraway, a debut winner on August 15.

After Princess Noor broke inward and bumped My Girl Red into 22-1 Roll Up Mo Money, causing Flavien Prat to pull up My Girl Red, jockey Abel Cedillo sent 7-1 fourth choice Illumination to the front out of the chute through fractions of 23.01 and 45.49 while pressed by Forest Caraway and stalked by Princess Noor. Entering the lane Illumination tired as Princess Noor quickly took over through 3/4 in 1:10.03. Kept to task by Victor Espinoza, Princess Noor drew off late to win by 6 1/2 lengths over Forest Caraway in 1:23.15. It was another 2 1/4 lengths back to Illumnination third. There was a stewards' inquiry into the start, and they ruled that although Princess Noor came in and bumped My Girl Red into Roll Up Mo Money, the incident did not warrant a disqualification, and the result stood. 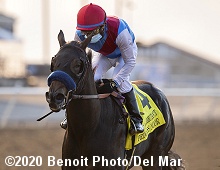 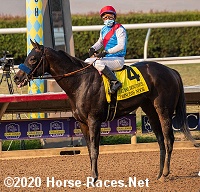 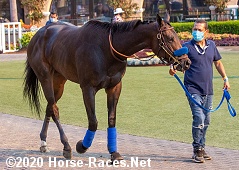 Left: Princess Noor in the "winner's circle". Winning jockey Victor Espinoza said, "Yes, she's a little green. Only her second time (to race). Coming away from there she went in a bit and I tried to get her off as quickly as I could. You try to control the babies as best as you can, especially at the break. The other filly (My Girl Red) came out on me. My filly was OK from there. I really don't know how good she is, because I haven't let her run yet. It's nice to be back at Del Mar and riding good horses."

Right: Princess Noor in the paddock before the race. Winning trainer Bob Baffert said by phone from Kentucky, "We knew going in she was a special filly. She showed so much brilliance at the sale, that's why she cost so much, and we got what we expected to see today. She broke a little off kilter and was behind horses, but Victor didn't really push her, especially at the end. We're happy to get the win. We'll run her back at Santa Anita and then go from there." The win extends Baffert's stakes winning record at Del Mar to 139. 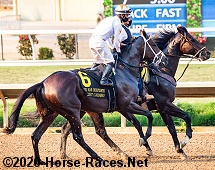 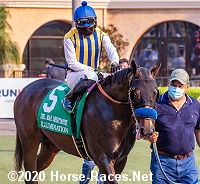 Jockey Edwin Maldonado sent 50-1 Dominant Soul to the lead out of the chute through fractions of 24.63, 49.77, and 1:14.74 while pressed by 12-1 Margot's Boy and stalked by Pixelate. Turning for home Dominant Soul continued to lead through 1 mile in 1:38.38 but Pixelate and Margot's Boy surged ahead setting up a duel to the line. Margot's Boy poked his head in front at the 1/16 pole but Pixelate under Umberto Rispoli fought back to win by a head in 1:50.25. It was another 1 1/4 lengths back to Dominant Soul third. 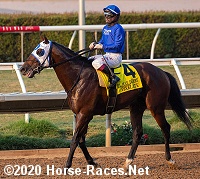 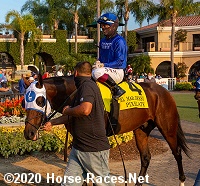 Left: Pixelate returns after the race. Winning jockey Umberto Rispoli said, "I talked to Mike (Stidham, trainer) this morning, and we both agreed that we had the best horse in the race. I said I wanted to ride him up closer than normal for him; I told him this is a smaller tighter course, not like Churchill. He said, 'You ride him like you want to.' I had a great trip and he fired when he had to. I'm very happy. And I've waited 16 years (the length of his riding career) to wear these (Godolphin silks)."

Right: Pixelate in the paddock before the race. 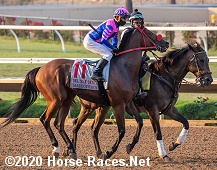 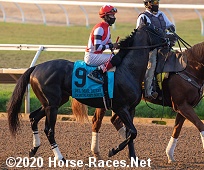 Right: Third place finisher Dominant Soul in the post parade. He improved his record to 1 win, 0 seconds, and 2 thirds in 9 starts, earning $75,051 for owner, breeder, and trainer Paula Capestro.


Kicking off Sunday's stakes trio was the $75,000 Del Mar Juvenile Fillies Turf featuring a field of 11 two-year-old fillies going 1 mile on the turf. Debut winner Madone was sent off as the 8-5 favorite over 5-2 Ivy League, 2nd in her debut last out, and 9-2 Canoodling, winner of her debut.

Jockey Tiago Pereira sent 13-1 Super Game to the lead first time by and she set fractions of 24.03, 50.53, and 1:15.38 while pressed by 59-1 Basilia and salked by 53-1 My Princess Ellie. Turning for home, the pacesetters tired as 20-1 Nimbostratus, 7th early, moved up to take over the lead 6 wide through 7f in 1:26.48. Favorite Madone, 8th early under Flavien Prat, rallied late and passed Nimbostratus on the inside to win by 1/2 a length in 1:39.09. It was a nose back to late-running Ivy League third. Nimbostratus bore out into Ivy League at the 1/16 pole so after an inquiry the stewards disqualified Nimbotratus and placed him 3rd behind Ivy League. 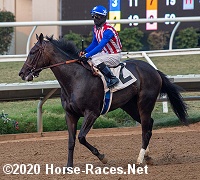 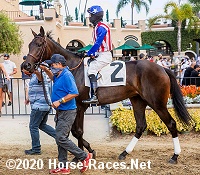 Right: Madone heads out of the paddock before the race. The Simon Callaghan trainee improved her record to 2 wins in 2 starts, earning $81,300 for owner Kaleem Shah.