The $300,000 Del Mar Debutante Stakes (G1) on Saturday features the top 2-year-old fillies on the west coast sprinting 7 furlongs on the Polytrack at Del Mar. The 14,262 on hand enjoyed a warm day at the oceanside oval, with sunny skies and temperatures in the mid 80's. Sunset Glow was sent off as the 9-10 favorite in the field of 9 off her win in the Sorrento Stakes (G2) at Del Mar after finishing second in the Albany (G3) at Royal Ascot. In to challenge her included 7-2 second choice Her Emmynency, a 2 3/4 length debut winner last out, and 8-1 third choice Starlet O'Hara, a maiden win in her second try.

19-1 Seduire battled for the early lead with 22-1 Windy Forecast and 58-1 longest shot Stealth Drone through fractions of 21.96 and 44.75. Entering the stretch, the pacesetters tired as Sunset Glow, fifth early, and Her Emmynency, fourth early, made their way to the front through 3/4 in 1:09.99. Dueling over the final 3/16, Sunset Glow outfinished Her Emmynency by a neck in 1:23.12. It was another 3/4 length back to late-running 14-1 Conquest Eclipse third. 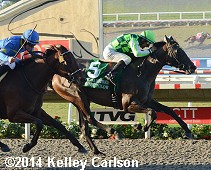 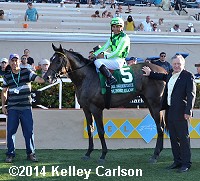 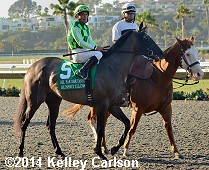 Left: Sunset Glow in the winner's circle. Blake Heap, assistant to trainer Wesley Ward said, "It wasn't that big of a decision (Debutante over Futurity). Everything went well, she didn't need any extra time, so we decided to go right here. We thought we'd take her back behind horses this time, let her sit behind the speed a little bit. I was wondering if Victor would be able to squeeze through there for a little while, but he made it. She'll go back to Kentucky now and Wesley will decide what to do with her next."

Right: Sunset Glow heads into the paddock. Jockey Victor Espinoza said, "I took a chance with her today; I tried something different. Going 7/8 and seeing all the speed in there, I thought my best chance was to take her back and then make a run. I know she's been used to running up front, but I thought we'd have to come from the back. I'm sure glad it worked out. When you've got a favorite like this, it's good when it works out. But she gives me confidence; she responds to what you want to do. There was never a doubt she would go through those holes. No hesitation. I'm proud of her for that. She got a little tired at the end, but she's the kind that will probably run on." 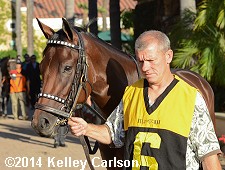 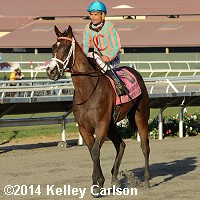 Right: Third place finisher Conquest Eclipse in the paddock. Jockey Corey Nakatani said, "She ran dynamite. Mark (trainer Casse) told me he thought she was a Grade 1 filly and to ride her that way. And he was spot on. I don't know that she was handling this track the best, but she still ran well. And I can't wait until they start running farther." 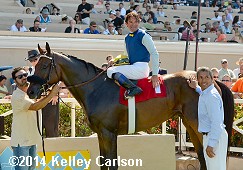 Three hours before the Del Mar Debutante day was the $90,000 Harry F. Brubaker Stakes for older horses going 1 mile around 2 turns of the Polytrack. Blue Tone was sent off as the 3-5 favorite in the field of 6 over 7-2 Big Bane Theory and 9-2 Drill.