The feature race in New York this weekend is the $100,000 Discovery Handicap (G3). After Precursor was scratched, a field of only 5 three-year-olds went to post on Saturday for this 1 1/8 mile trip, one lap of Aqueduct's main track. Just 3,734 spectators were on hand on a sunny afternoon with temperatures in the upper 50's. Phipps Stable 3-year-old homebred Gone Astray was sent off as the 3-5 favorite, exiting two straight Grade 2 victories in the Pennsylvania Derby and Ohio Derby. In to challenge him included 3-1 second choice Birdrun, an allowance winner by 8 lengths last out and stepping up to stakes company for the first time, and 4-1 third choice Haynesfield, winner of the Empire Classic last out.

13-1 Redding Colliery was sent to the lead early by new jockey John Velazquez and he set slow early fractions of 24.25, 48.84, and 1:13.46 while as many as 2 lengths in front of Haynesfield and 14-1 longest shot Bad Action who stalked him second and third respectively. Entering the stretch, Redding Colliery tired and dropped from contention, allowing Haynesfield to take over at the 5/16 pole to get the mile in 1:37.51. Haynesfield drew away through the final 3/16 mile to win going away by 4 1/2 lengths over Bad Action in 1:50.10 over the fast track. It was just a neck back to late-closing favorite Gone Astray third. 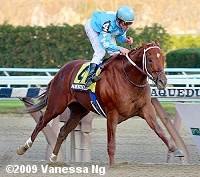 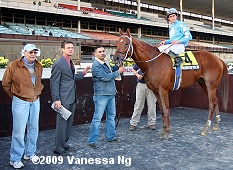 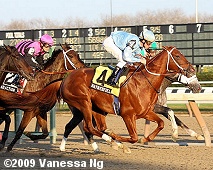 Left: Haynesfield in the winner's circle. Toby Sheets, assistant to trainer Steve Asmussen said, "He's got a very high cruising speed, it looks like to me. We thought that last year, but he was a little immature. He's definitely grown into himself. It's nice to have the privilege of a horse like this. No thoughts whatsoever as to what's next; we'll see how he comes out of it and go from there."

Right: Haynesfield in second as they pass by the first time shortly after the start. 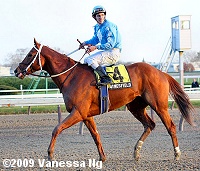 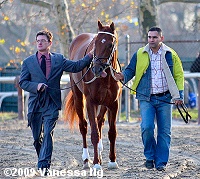 Left: Haynesfield returns after the race. His jockey Ramon Dominguez said, "We weren't in a real hurry. We said if (Redding Colliery) or (Birdrun) wanted to go, we would let them go. Since my horse broke so good, I was going to let him go to the lead, but (Redding Colliery) went on and I decided to just sit off him. He was very relaxed. When it was time to pick it up, he was there for me. It doesn't make any difference (being on the pace or off). It took him a race to get ready off the layoff; he ran 6 1/2 furlongs (in the Sir Keys) and that's really not his best distance. Once he's on his game he can be in front, or, when the pace is right, he can sit just off. He's very versatile."

Right: Haynesfield walks over from the barn before the race. 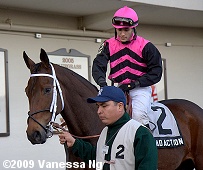 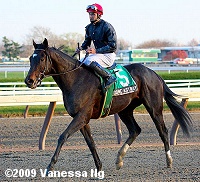 Left: Second place finisher Bad Action in the paddock before the race. The 14-1 longest shot stalked the pace in third early under jockey David Cohen, came out three wide for the drive and closed well to hold off the favorite late for second money. The Gary Contessa-trained son of Brahms improved his record to 8 wins, 6 seconds, and 3 thirds in 22 starts, earning $320,215 for owners Sanford H. Robbins, Winning Move Stable, and P and D Kaplan Racing.

Right: Third place finisher Gone Astray returns after the race. The 3-5 favorite settled off the pace in fourth 3 1/2 lengths back and 3 wide under regular rider Eddie Castro, but put in a weak late bid to finish third beaten 4 3/4 lengths at the line. The Shug McGaughey-trained son of Dixie Union improved his record to 4 wins, 3 seconds, and 3 thirds in 13 starts, earning $865,262 for owner-breeder Phipps Stable.