The first Grade 1 event of the 2022 meeting is the $500,000 Diana Stakes (G1), featuring 6 older fillies and mares going 1 1/8 miles over the Mellon turf course. Bleecker Street was sent off as the 4-5 favorite, still undefeated after 7 career starts including the Modesty (G3) at Churchill Downs and New York Stakes (G1) at Belmont Park. In to challenge her included 7-2 second choice Technical Analysis, winner of the Gallorette (G3) at Pimlico, and 4-1 third choice Rougir, fifth in the New York Stakes after winning the Beaugay (G3).

Jockey Joel Rosario sent 8-1 fourth choice In Italian to the lead first time by and she set fractions of 22.45, 45.83, and 1:09.50 while pressed by 9-1 Creative Flair and stalked by 28-1 longest shot Dalika. Turning for home Technical Analysis moved up to challenge has In Italian continued to lead through 1 mile in 1:32.78. Kept to task by Rosario, In Italian turned away Technical Analysis to win going away by 1 1/2 lengths in a new course record time of 1:45.06, 0.16 seconds faster than Hard Not to Like's previous record set in 2015. It was another 1 1/2 lengths back to late-running favorite Bleecker Street third. 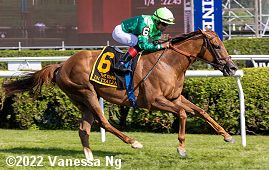 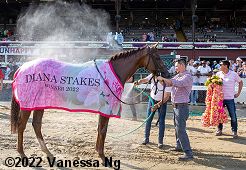 Left: In Italian in the winner's circle. Winning trainer Chad Brown, who trains the first four finishers said, "She was training super in the morning. She's been the lead horse in the works for Regal Glory two or three weeks in a row at Belmont. I've been so impressed with her not letting Regal Glory by her, who I regard as the top mare in the division just slightly over Bleecker Street. So, her not letting her by in the work and finishing up right on even terms and not giving an inch showed me that's really the way she wants to run, and she's ready for a top effort."

Right: In Italian gets hosed off after the race. Winning owner Peter Brant said, "I just think she's a terrific filly and she wouldn't be in here if we didn't think she had the ability to win. The instructions to Joel [Rosario] were ride this race like you can win, not just for pace, and he did it. I've had some really great fillies in the past and they ran really well in this race. It's always been a very special race on my calendar to target, having spent many years in Saratoga when I was in horse racing 40 years ago. Waya won it when it was a mile and a sixteenth and she set a world record in that race." 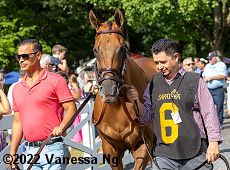 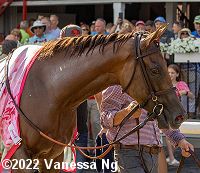 Right: In Italian heads back to the barn after the race. Brown added, "I was looking towards the rear. I know Technical Analysis was in a cozy spot, but I figured the two horses chasing her [Dalika and Creative Flair] couldn't sustain in their form. I felt good about Technical Analysis maybe getting a jump on Rougir and Bleecker Street, but sure enough In Italian found another gear, much like she has in the mornings recently." 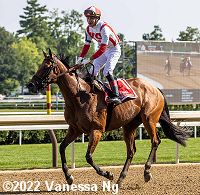 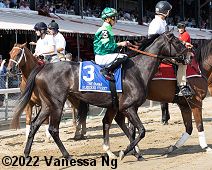 Left: Second place finisher Technical Analysis returns after the race. Jockey Jose Ortiz said, "She was a little keen going into the first turn. Other than that, she relaxed well after. I came home running. I'm very proud of my horse. She ran an amazing race. I thought at the top of the stretch when I got out [I had a chance], but then [In Italian] re-broke and that was it. She ran a very good race. I'm very proud of her. She got beat by a horse than ran very hard and went fast early and re-broke. That's very hard to do, but In Italian did it."

Right: Third place finisher and beaten favorite Bleecker Street heads out for the post parade. Jockey Irad Ortiz Jr. said, "She had a little too much to do. They never came back to her. They kept on going, it was a fast race." 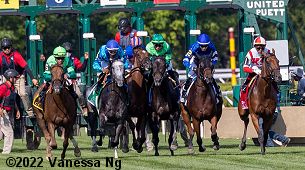 The horses break from the gate for the Diana Stakes.


The $150,000 Sanford Stakes (G3) featured a field of 12 two-year-olds sprinting 6 furlongs on the main track. Forte was sent off as the 7-5 favorite off his 7 3/4 length debut win at Belmont Park on May 27. In to challenge him included 4-1 second choice Andiamo a Firenze, a debut winner by 4 lengths at Belmont on June 3, and 7-1 third choice Valenzan Day, third in the Tremont after winning his debut, both at Belmont.

Jockey Tyler Gaffalione sent 8-1 fourth choice Curly Jack to the lead exiting the chute through fractions of 22.59 and 45.94 while pressed by 17-2 fifth choice Mo Strike and stalked by Andiamo a Firenze. Turning for home, Curly Jack tired as Mo Strike took over the lead through 5f in 58.26. Kept to task by Florent Geroux, Mo Strike drew off late to win by 3 1/2 lengths over late-running 18-1 Great Navigator in 1:11.35. It was a neck back to Andiamo a Firenze third, and 2 more lengths back to late-running favorite Forte fourth. 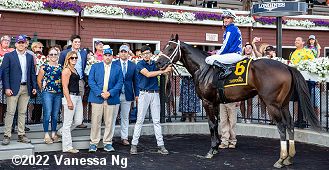 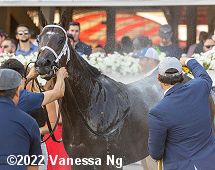 Left: Mo Strike in the winner's circle. Winning trainer Brad Cox said, "I didn't really know how the pace would set up. He broke and put himself right there, I saw the 22 and one, or whatever it was, and I thought if he was there and he was doing it, he would have something to finish up with. He galloped out really well in his first run and he's a pretty intelligent horse. I think he can stretch a bit – I'm not going to say he's going to go a mile and a quarter just yet, but he's a nice horse that I think his biggest asset is his mind." He will go next in the Hopeful.

Right: Mo Strike gets hosed off after the race. Winning jockey Florent Geroux said, "We were able to slow it down a little bit the second quarter and when the horse came to me down the lane, my horse was able to give me another gear and fight all the way to the wire. I was very pleased with his effort. The last 1/8 mile, I felt the race was pretty much over and he was just keeping along nicely. If someone else was going to attack me, I felt I had another gear to fight them down. I think the key, especially on young horses, is about position and how well they can handle themselves. He's a very smart horse, he can break sharp and relax nicely. So, when you ask him down the lane, he has another gear to go on." 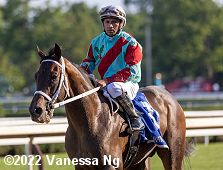 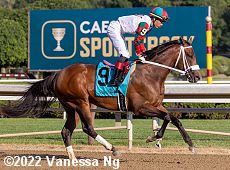 Left: Second place finisher Great Navigator returns after the race. Jockey Jairo Rendon said, "My horse I liked from the beginning since I started breezing him. I knew this was going to be a tough race, but we got here and ran very good." 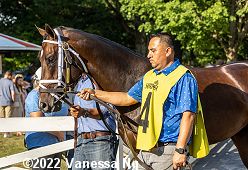 Fourth place finisher and beaten favorite Forte in the paddock before the race. The Todd Pletcher trainee has a record of 1 win in 2 starts, earning $60,000 for owners Repole Stable and St. Elias Stable.