There were three graded stakes contested on the second Saturday of the Saratoga summer meeting. Conditions were excellent with sunny skies and temperatures in the low 80's for the 25,375 fans in attendance. During the fourth race, jockey John Velazquez became the all-time wins leader at Saratoga, surpassing Jerry Bailey with win number 694 aboard Unitarian.

The $600,000 Diana Stakes (G1) featured a field of 5 older fillies and mares going 1 1/8 miles over the inner turf course. jenny Wiley (G1) winner Centre Court was sent off as the 6-5 favorite after finishing fourth in the Just a Game (G1). In to challenge her included 3-2 second choice Stephanie's Kitten, winner of both the Just a Game and the Churchill Distaff Turf Mile (G2), and 5-1 third choice Dream Peace, who was second in this race last year and comes here off a third place finish in the New York (G1).

Laughing went to the lead first time by and set fractions of 24.24, 49.19, and 1:12.53 while pressed but Centre Court. Entering the stretch, the pace battle continued through 1 mile in 1:35.80, but Centre Court tired badly in the final furlong. Dream Peace, fourth early, put in a strong rally but Laughing held her off to win by a head in 1:47.24 over the firm course. It was another 1/2 length back to Stephanie's Kitten third, while Centre Court was last. 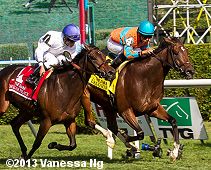 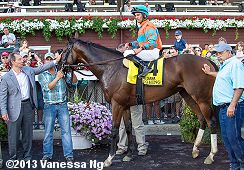 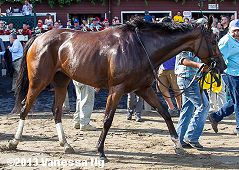 Left: Laughing in the winner's circle. Winning trainer Alan Goldberg said, "She had the winter off and she came back well. She ran a pretty good race last time, first time out of the box. She came out of the race just great, so (owner Richard Santulli) said, 'Let's take a shot.' Maybe we'll come back for the Ballston Spa or wait for the Flower Bowl at Belmont."

Right: Laughing heads back to the barns after the race. 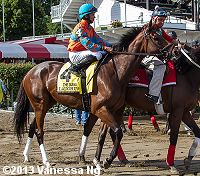 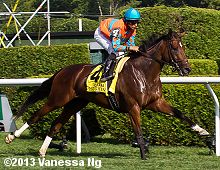 Right: Laughing leads first time by. Jockey Jose Lezcano said, "The trainer said, 'Break good, let her do her thing, and go from there.' When I asked her at the 1/4 pole, she took off again and gave me enough to win the race." 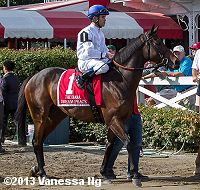 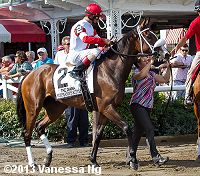 Left: Second place finsher Dream Peace heads out for the post parade. Jockey Joel Rosario said, "Perfect trip. I thought I was going to get there but the horse in front kept going. My horse ran good."

Right: Third place finisher Stephanie's Kitten heads out for the post parade. The 3-2 second choice was last early under jockey John Velazquez and rallied late to get third beaten 1/2 length. The Wayne Catalano trainee improved her record to 7 wins, 0 seconds, and 4 thirds in 13 starts, earning $1,640,404 for owner-breeder Ken and Sarah Ramsey. 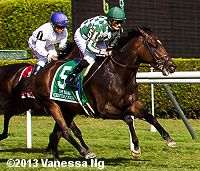 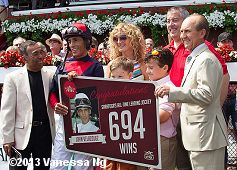 Left: Last place finisher and beaten favorite Centre Court. Jockey Julien Leparoux said, "We had a good trip. I had her in a spot where she likes, she was just flat. She didn't really kick for me at the end; that's it. She was empty at the end."

Right: Jockey John Velazquez poses with previous record holders Jerry Bailey and Angel Cordero. He said, "I've been riding for (Todd Pletcher) since 1998 and we're still going. I want to thank my family, without whose support I wouldn't be able to do this. And I have to thank the fans. The fans have been great to me. Thank you for your support. Thank you everyone. I appreciate it, and hope to win many more." NYRA President and CEO Chris Kay added, "I'm delighted for John Velazquez and it is entirely fitting that his record-breaking winner was trained by Todd Pletcher. I'm pleased that Todd and Jerry Bailey and Angel Cordero Jr. could all share the moment with John and his family. John is not just a Hall of Fame rider, but one who has given back to this sport in so many ways.  He is a model for all those who follow in his footsteps." 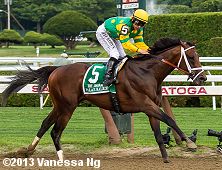 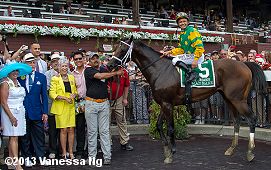 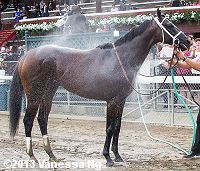 Left: Palace Malice in the winner's circle. Trainer Todd Pletcher said, "Everything went absolutely as we talked about it this morning when Mike [Smith] and I went over the race. We felt like Moreno would be the pacesetter. The only thing we were trying to figure out was if we'd be laying second or third. The horse broke really well and went to the first turn really relaxed. We had a beautiful trip. He got into a good comfortable rhythm down the backside. He relaxed nicely and finished up pretty well in a very, very good time. We got the race over the track. The horse keeps getting better and better and today was arguably his best performance yet. Hopefully, on to the Travers."

Right: Palace Malice gets hosed off. 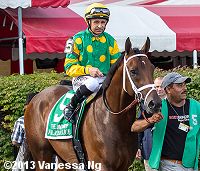 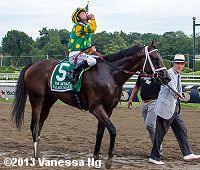 Left: Palace Malice heads out for the post parade. Jockey Mike Smith said, "It set up really well, but Todd and his connections had him really ready. He was better than last time. Those are kind of big words to say after winning the Belmont, but he truly was, and with room to grow. The last 1/16 mile he was well within himself. He was searching for more ground, if i needed it. I think he'll get every inch of 1 1/4; I really do. He was really good early. He jumped on the bit a little bit coming off the backstretch. I talked him out of it, and he was great. He's still learning."

Right: Owner Cot Campbell of Dogwood Stable leads Palace Malice to the winner's circle. Campbell said, "He was so professional; the time was good. It unfolded like we hoped it would. When he pounced, he pounced. He got the job done. He finished up well and I think it augers well for the Travers. But Travers or not, this is a great race to win and a great town to win it in. God almighty, I'm so pleased." 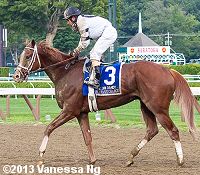 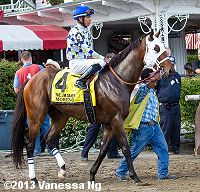 Left: Second place finisher Will Take Charge returns after the race. Jockey Junior Alvarado said, "I had a perfect trip, he was outside, clear of everything. The only thing is when I started picking it up, he started lugging in. That was the only thing that probably did him any harm getting there in time. He still ran a huge race."

Right: Third place finisher Moreno heads out for the post parade. Trainer Eric Guillot said, "He ran good. I just wanted him to run good enough to prove he belongs and come back for the Travers. We beat the rest of the field convincingly. He got beat by a good horse; he got beat by the Belmont winner. If I don't get pressured, the second-place horse doesn't beat me."


Kicking off the stakes action on Saturday was the $300,000 Prioress Stakes (G1) for 3-year-old fillies sprinting 6 furlongs on the main track. Kauai Katie, winner of the Forward Gal (G2) and Road Princess Stakes, was sent off as the 1-2 favorite off her third place finish in the Acorn (G1). In to challenge her included 4-1 second choice So Many Ways, third in the Iowa Oaks (G3) after winning the Eight Belles (G3), and 5-1 third choice Wildcat Lily, winner of the Azalea (G3).

Wildcat Lily and So Many Ways battled for the lead down the backstretch through fractions of 22.22 and 45.12 while stalked by Kauai Katie. Entering the stretch, Kauai Katie tired badly to eventually finish last, as Wildcat Lily continued to lead through 5/8 in 57.03. 21-1 Lighthouse Bay, fourth early, rallied through the lane to win by 1/2 a length in 1:09.29. It was another 1 3/4 length from Wildcat Lily to 13-1 Irish Lute third. 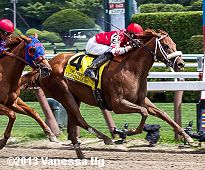 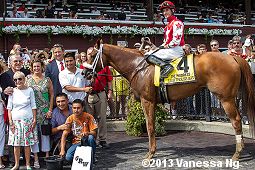 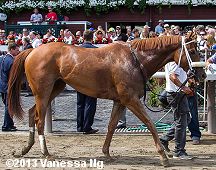 Left: Lighthouse Bay in the winner's circle. Her trainer George Weaver, celebrating his first Grade 1 win in North America, said, "When this race came up with a short field we decided with the owners to go ahead and go in this race. If she goes to the front, she doesn't run well. The two times she got to the lead she stopped. So, she's a stalker. She was right where I wanted to be, and (jockey Rocco) had horse, and luckily when he asked her she ended up being best when she got to the wire. This is my first Grade 1 in this country. I won the Grade 1 over in Dubai with Saratoga County (2005 Dubai Golden Shaheen), but this is my first Grade 1 in this country. It's been a while."

Right: Lighthouse Bay heads back to the barn after the race. 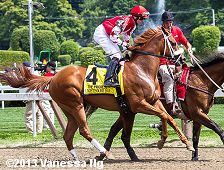 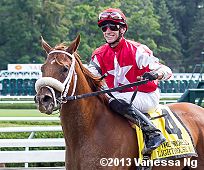 Left: Lighthouse Bay heads out for the post parade. Her jockey Joe Rocco Jr. said, "The three horses I thought were the horses to beat in the race all kind of lined up in front of me. I was able to get to the rail and save ground behind them. When I called on her to shoot through on the rail, I had plenty of horse." 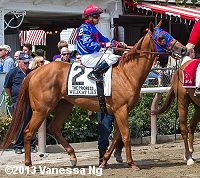 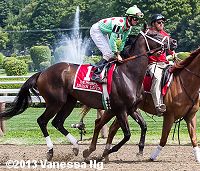 Left: Second place finisher Wildcat Lily heads out to the track. The 5-1 third choice set the pace under jockey Javier Castellano but could not hold off the winner. The Manuel Azpurua trainee improved her record to 5 wins, 4 seconds, and 1 third in 17 starts, earning $293,065 for owner Rontos Racing Stable.

Right: Third place finisher Irish Lute in the post parade. The 13-1 shot was fifth early under jockey Robby Albarado and rallied to get third beaten 2 1/4 lengths. The Dallas Stewart trainee improved her record to 2 wins, 3 seconds, and 2 thirds in 9 starts, earning $128,424 for owner-breeder Donarra Thoroughbreds. 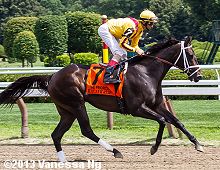