There were two graded stakes contested on the second Saturday of the Saratoga summer meeting. 24,548 fans came out to the rain-soaked facility, with temperatures in the upper 70's, however the rains ended in time for the feature races.

The first graded stakes on the Saturday card was the $600,000 Diana Stakes (G1) featuring a field of 6 older fillies and mares going 1 1/8 miles over the inner turf course. Beaugay Stakes (G2) winner Winter Memories was sent off as the 7-4 favorite off her second place finish in the Just a Game Stakes (G1) at Belmont Park. In to challenge her inclded 5-2 second choice Tapitsfly, winner of the Just a Game, and 7-2 third choice Hungry Island, third in the Just a Game after winning the Distaff Turf Mile (G2) at Churchill Downs.

Jockey Joel Rosario sent Tapitsfly to the lead first time past the stands and she set fractions of 23.31, 47.56, and 1:11.27 over the good turf while styalked by 26-1 longest shot Law of the Range. Entering the stretch, Tapisfly tired as Winter Memories, fourth early, came through to take the lead through 1 mile in 1:35.86. 7-1 Dream Peace put in late rally but Winter Memories easily held her off by 1 1/2 lengths at the line in 1:48.50. It was another 3 1/4 lengths back to 4-1 fourth choice Zagora third. 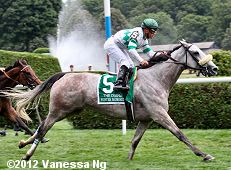 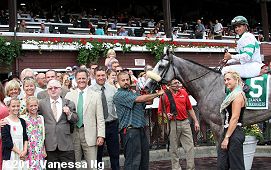 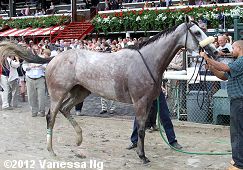 Left: Winter Memories in the winner's circle. Winning owner John Phillips said, "She likes upstate New York. It's a great venue. She is one very, very good horse, and we're proud to have her. She's tough. I know one thing about her – she, like the rest of her family, will give her best. It's a wonderful quality, in people or horses. I almost didn't know how to handle (her having a clean trip). She was 4-wide and trouble-free, and I'm thinking, 'I'm not sure what's going to happen here!' It was quite a move that she made."

Right: Winter Memories gets hosed down after the race. Trainer James Toner said, "There was no pace. I think we were closer due to the way the race was shaping up. I just left it in Javier's hands and said, 'Just do what you want to do, but I wouldn't let (Tapitsfly) get too far away from us today.'" 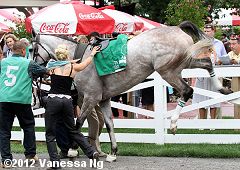 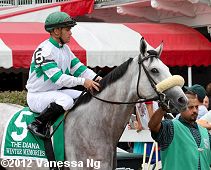 Left: Winter Memories kicks up her heels in the paddock before the race.

Right: Winter Memories heads out for the post parade. Jockey Javier Castellano said, "I am very fortunate to ride this filly. She's very honest. She's a nice filly. I was concerned a little bit because it was a small field. I would have liked to cover her up a little bit at the beginning of the race. There wasn't much speed in the race. That was my concern. It worked out great. It was amazing. She was able to cover up. She was able to finish so well today. Tapitsfly took advantage the last time. There was not much speed in that race and it was a short distance. Today was my opportunity. My filly is a 1 1/8-mile or a 1 1/4-mile horse. She likes the two turns. She likes to cover up and she gave me that kick." 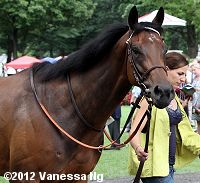 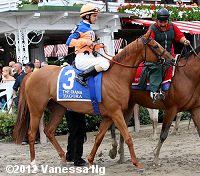 Left: Second place finsher Dream Peace in the paddock before the race. Owner Nicolas de Chambure said, "It was her first time (running) since May, so she probably needed the race. She's staying in America now (with new trainer Chad Brown), so hopefully we'll be able to pick up a Grade 1 win for her. We're very happy though, she ran a very good race."

Right: Third place finisher Zagora heads out for the post parade. Jockey Ramon Dominguez said, "I had a great trip. I was able to sit in the pocket right behind the two leaders. I really had first run at them if I wanted. But I decided to wait a little longer because I saw that the winner at that point was coming with a really strong run. I just felt like I wasn't going to be able to keep up with her. When I finally got my filly out she came running and was able to be third."


The $500,000 Jim Dandy Stakes (G2) is the major local prep for the Travers (G1) to be run 4 weeks later. A field of 8 three-year-olds contested this 1 1/8 mile main track test, with Withers (G3) winner Alpha sent off as the 9-5 favorite off a close second in the Wood Memorial (G1) and a 12th place finish in the Kentucky Derby (G1). In to challenge him included 7-2 second choice Neck 'n Neck, winner of the Matt Winn Stakes (G3) at Churchill Downs, and 5-1 third choice Liaison, third in the Swaps (G3) at Hollywood.

Jockey Ramon Dominguez sent Alpha to the lead and he set fractions of 24.40, 49.30, and 1:14.03 while pressed by 6-1 Teeth of the Dog to his outside. Entering the stretch Teeth of the Dog tired as Neck 'n Neck moved up to issue a challenge through 1 mile in 1:38.19. However, Alpha easily turned him away, drawing off to win by 2 lengths in 1:50.47 over the sloppy track. It was another 2 lengths back to late-running 5-1 Liaison third. 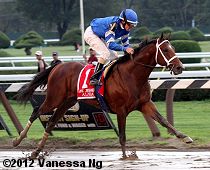 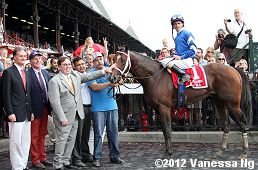 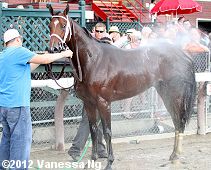 Left: Alpha in the winner's circle with trainer Kiaran McLaughlin patting his nose. Jimmy Bell, representing winning owner Godolphin Racing said, "He was fit and Kiaran's always had good luck, he can run them off the bench. We had a little hiccup before the Belmont, spiked a temperature, and we agreed to stop. We talked to Simon Crisford and he said, 'You know what, don't be pushing this. Give him the time off. Go to Saratoga and let's see if we can do something in the Jim Dandy that will give us a reason to look forward to the Travers.' We followed instructions well, and so did the horse."

Right: Alpha gets hosed off. Trainer Kiaran McLaughlin said, "(Ramon and I) both thought about (going to the lead) and talked about it. We both thought the same. In the Wood Memorial, he didn't break well and then he got smashed going into the first turn, and we thought he would be forwardly placed. Here, when you're in the 1 hole, you have to go. He wasn't going to rush him off his feet, but he wanted to be on the lead. So it was a great call, and it all worked out." 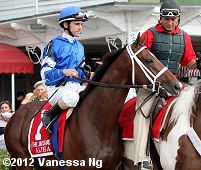 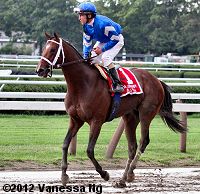 Left: Alpha heads out for the post parade. Jockey Ramon Dominguez said, "He was superb all the way around there. Turning for home when I shook him up, he just took off for me. It's an indication he'll handle farther, and I love the way he was handling himself prior to and after the race. Turning for home, I could feel (Neck 'n Neck) coming for me, but the more I got after my horse, just opening up my reins, the more he was finding. I felt pretty confident at that point."

Right: Alpha returns after the race. Trainer Kiaran McLaughlin said, "He's really done very well since the Belmont incident with the temperature, so we knew he was ready. He's been training great. Into the first turn, I was happy. If he was there, I knew he was handling (the wet track) well. I felt like he should handle it. He's got a very small, narrow foot, so he should handle it with his pedigree and his foot size. We were very happy." 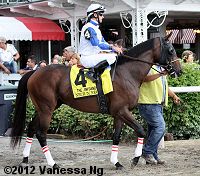 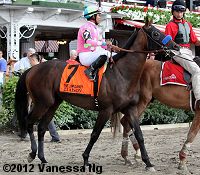 Left: Second place finisher Neck 'n Neck heads out for the post parade. Jockey Leandro Goncalves said, "He's drastically improved from race to race. He's in good form right now. I expected him to run like he did. He ran a good race. We were second-best in a race with really no pace. I think he could give me my first Grade 1 win. I think we'll be back in four weeks. I was concerned with the off track. When the gates opened, it took him a little bit to get his feet together. Once I got him to the outside, he started traveling good. When we got to the quarter-pole, we started moving, and I thought we had a chance to catch Alpha, but Ramon had a lot of horse left."

Right: Third place finisher Liaison heads out for the post parade. Jockey Martin Garcia said, "Well, it was the first time he ran in the mud. He handled it well. He wasn't very sharp out of the gate, but I tried to get a position. I tried to pick it up from there, but we got beat by very good horses."