The feature race on the third Saturday of the 2020 Bing Crosby fall meeting at Del Mar was the $100,000 Desi Arnaz Stakes for 2-year-old fillies sprinting 6 1/2 furlongs on the main track. Conditions were excellent with sunny skies, no wind, and temperatures in the mid 60's. After 2 scratches, Private Mission was sent off as the 1-2 favorite in the field of 6 off her debut win at Santa Anita on October 2. In to challenge her included 5-1 second choice Astute, a debut winner over the Santa Anita turf on October 12, and 11-2 third choice Queengol, winner of the debut in September at Del Mar followed by a 2nd place finish in the Anoakia Stakes at Santa Anita.

Jockey Mike Smith sent Astute to the lead out of the chute through an opening quarter of 22.21 while pressed by Private Mission and stalked by 10-1 fourth choice Heels Up. On the far turn Private Mission gained the lead through a half in 45.30. Entering the lane, Smith sent Astute to pass the tiring favorite, opening up a 2 length lead midstretch through 3/4 in 1:10.58. Kept to task by Smith, Astute drew off late to win by 7 1/2 lengths ver late-running Queengol in 1:17.28. It was a nose back to Heels Up third, and 1/2 a length more to favorite Private Mission fourth. 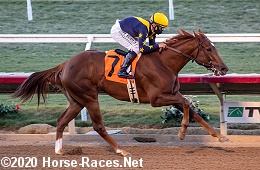 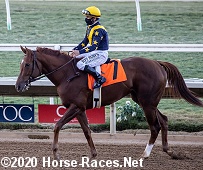 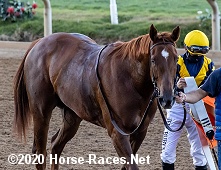 Left: Astute in the "winner's circle". Winning jockey Mike Smith said, "Wow, That's what I've got to say. I knew she was good; I just didn't know she was this good. She was good on the grass the other day (winning a straight maiden race at five and a half furlongs on the green at Santa Anita on October 12), but she's even better on the dirt."

Right: Astute heads back to the barn after the race. 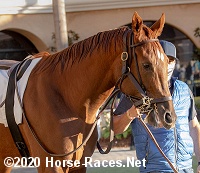 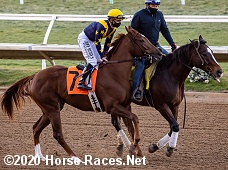 Left: Astute in the paddock before the race.

Right: Astute in the post parade. Winning trainer Richard Mandella said, "The owners and the manager - Alex Solis, Jr. - told me before I ever saw her that she's special and it's kind of held true. She got a little sick on me in the summer and I had to give her a month off, so that's why she's a little late (starting her career). I only put her in the maiden turf (debut win on October 12 at Santa Anita) because I knew she could do turf and I was afraid a dirt race the next day wouldn't fill. I expected she'd run well today, but maybe not this well. We'll think about the Starlet." 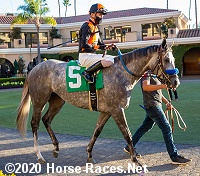 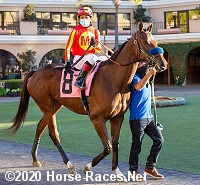 Left: Second place finisher Queengol in the paddock before the race. The John Sadler trainee improved her record to 1 win and 2 seconds in 3 starts, earning $68,500 for owners Saragol Stable and Johana Viana.

Right: Third place finisher Heels Up in the paddock. The Bob Baffert trainee improved her record to 1 win, 1 second, and 1 third in 3 starts, earning $56,000 for owners Karl Watson, Mike Pegram, and Paul Weitman. 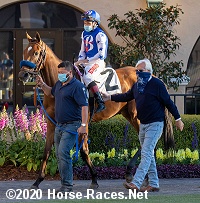 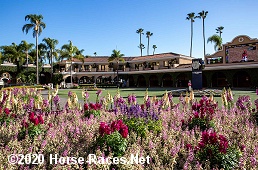 Left: Fourth place finisher and beaten favorite Private Mission in the paddock with trainer Bob Baffert. The Bob Baffert trainee has a record of 1 win, 0 seconds, and 0 thirds in 2 starts, earning $39,000 for owner Baoma Corporation.