The Kentucky Derby is the biggest race of the year at Churchill Downs, and as usual, lucrative graded stakes races are scheduled on the undercard featuring the other divisions of racing. A crowd of 156,635 came out and were treated with warm weather and excellent racing. The track dried out from earlier rains, rendering the main track "good", while the turf course remained yielding. Interestingly, many of these races had been run as handicaps in previous years but were run under allowance conditions for their 2007 renewals.

Although I was not able to get a photo credential this year, I was able to join Jane Dempsey's Kentucky Derby Junket to get photos. Many thanks to her help so I could still cover the Derby and Oaks as in the past. 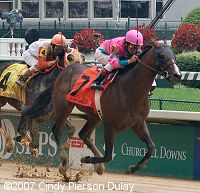 Kicking off the stakes action on Derby Day was the $250,000 Churchill Downs Stakes (G2) for older horses sprinting 7 furlongs on the main track, with a field of 6 making the gate. 12-1 longest shot Cougar Cat battled on the front end with 8-1 Saint Anddan down the back straight through quick fractions of 23.00 and 45.68, while 11-10 favorite Ah Day settled at the back of the pack along the rail early. Around the far turn, Cougar Cat faded from contention allowing Saint Anddan to inherit the lead entering the homestretch. Through the lane, Saint Anddan pulled away to a 2 length lead with a furlong to go, leaving late-running Ah Day with too much to do. Saint Anddan prevailed by 2 lengths over Ah Day in 1:22.31 over the good, sealed main track, and it was 2 1/2 lengths back to 7-2 Will He Shine in third.
Full results chart from Equibase 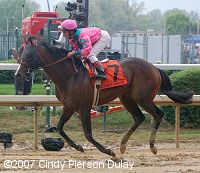 Winning jockey Mario Pino said, "He saved ground on the turn and ran really well. He finished up strong and galloped out really strong, just like he did last time. He's a very nice horse." Chad Brown, assistant to winning trainer Bobby Frankel added, "He was in our Fair Grounds division this winter and they did a good job with him down there. They sent him in looking good, and Bobby thought this was a really good spot for him." 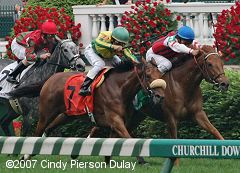 The first turf race of the afternoon saw a compact field of just five older fillies and mares go to post in the $150,000 Churchill Distaff Turf Mile (G3). 4-1 Rich Fantasy was loose on the lead early through slow fractions of 24.29, 48.94, and 1:13.59, while 7-5 favorite Magnificent Song sat at the back of the field down the backstretch. At the top of the stretch, Rich Fantasy continued to lead but 5-2 Quite A Bride, who sat in second early, moved up steadily to take over the lead inside the 1/8 pole. However, 7-2 Take The Ribbon, who stalked the pace in third early, came out 6 wide into the stretch and closed with a rush to nose out Quite A Bride at the line, completing the trip on good turf in 1:36.89. It was 2 1/2 lengths back to pacesetter Rich Fantasy in third, while favorite Magnificent Song failed to fire and was fourth.
Full results chart from Equibase 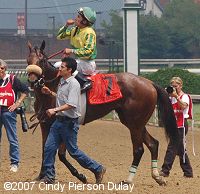 Winning trainer Wally Dollase said, "I can't do anything wrong. Whenever you win by one inch that's what I call a luck-out win." Winning jockey Rafael Bejarano added, "When I came to the turn she switched leads again and she kept running and the horse finished strong. (Runner-up Quite a Bride) finished strong too. I didn't think I had her, but in the last jump she put her head down." 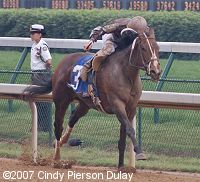 The $150,000 La Troienne Stakes (G3) featured 3-year-old fillies sprinting 7 1/2 furlongs on the main track. 9-5 favorite Appealing Zophie battled up front with 14-1 Time's Mistress down the backstretch through quick fractions of 22.40 and 45.20 while 9-2 second choice Silverinyourpocket trailed the field early. Turning for home, the pair continued to lead the field through 6 furlongs in 1:10.08, but the fast pace had taken its toll. Appealing Zophie stubbornly held the lead at the 1/8 pole, but Silverinyourpocket, who found running room on the inside on the turn, had moved up through the field and was all out to get up by 1/2 a length over another closer, 22-1 Suaveness, in 1:30.14 over the track now upgraded to fast. 5-1 Upcoming Story was third while pacesetter and favorite Appealing Zophie faded badly in the last furlong and finished sixth.
Full results chart from Equibase 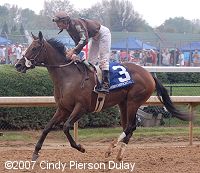 Winning jockey Calvin Borel, who would win the Kentucky Derby 3 hours later, said, "The horses in front of her were coming back pretty quick because they went kind of fast the first part and when I asked her to finish from the eighth pole home, she did." Trainer Helen Pitts added, "She's push-button. She's all class. She waits for you to call on her and does what you want." 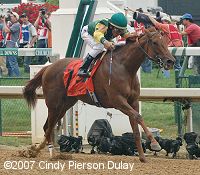 In the first of three Grade 1 events on Derby Day, older fillies and mares sprinted 7 furlongs in the $300,000 Humana Distaff Stakes (G1). 8-1 shot Shaggy Mane set an uncontested pace down the backstretch through fractions of 22.45 and 45.06, while even-money favorite Pussycat Doll sat near the rear of the field. Turning for home, Shaggy Mane began to fade from contention as 7-1 Hystericalady, who stalked the pace out wide early, moved up four wide to take over the lead at the top of the stretch. Pussycat Doll began her late run on the turn as well, but Hystericalady got a head start, pulling away late to win by 4 lengths in 1:21.87. It was another 1 3/4 lengths back from Pussycat Doll to 21-1 Carriage Trail in third.
Full results chart from Equibase 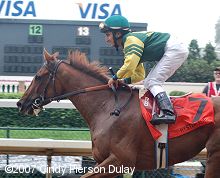 Winning trainer Jerry Hollendorfer said, "We had pointed to this race for a while She trained well on this track and I was hoping she would come in and do her thing. We decided to have her lay back a little off the pace today, which had me worried because she prefers to be on the pace. But Rafael is a very confident rider, and he rode a very good race. I'm not sure where she'll go next, but I'd like to be around with her in the fall, so we'll go back and plan a course of action to get us there." 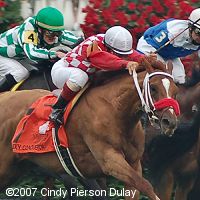 The penultimate stakes race on the card was the $500,000 Woodford Reserve Turf Classic (G1) for older horses going 1 1/8 miles on the turf. As expected, 42-1 longshot Shake the Bank, entered as the rabbit for 3-1 second choice Better Talk Now, was gunned to the front and was as many as 7 lengths clear while setting a pace of 24.16, 47.33, 1:11.52, and 1:36.53 while 19-1 Defer and 9-1 Brilliant led the rest of the field behind him. Shake the Bank slowed down with a furlong to go, but Better Talk Now failed to fire, finishing just behind his stablemate. Canadian champion and 8-1 shot Sky Conqueror, who went to his knees at the start and raced at the back of the field, came out nine wide into the lane and closed with a rush to get up by a nose over Brilliant in 1:49.01. It was a length back to 18-1 Danzon in third, while Better Talk Now was fourth.
Full results chart from Equibase 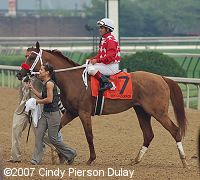 Winning jockey Javier Castellano said of the stumble, "I'm glad he stayed up, and I think it worked out perfect." Trainer Darwin Banach added, "We always have known he's a fantastic racehorse. We're just very proud of him."