This morning I saw 16 of the 19 Kentucky Derby entries on the track. Nobody was doing much other than schooling or gallops, but they were definitely checking out the track. The final horse to arrive will be Showing Up who is scheduled to fly in around 5pm today. Identifying some of the horses is a bit tricky since Baffert, Pletcher, and Asmussen weren't putting the named saddle cloths on their horses. Storm Treasure was probably out too, but I just couldn't figure out which of the several Asmussen horses he was. Instead of all wide angle shots today, I tried to get a few close up photos. Enjoy! 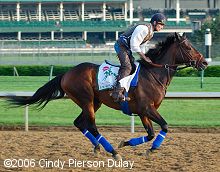 A.P. Warrior was out this morning for a jog down the mile chute then a 2 mile gallop. Trainer John Shirreffs said, "He handled it great. He likes it here and he's settled right in." 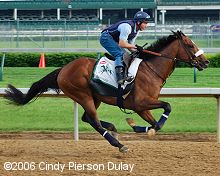 Barbaro galloped 1 1/2 miles and later schooled in the paddock. Trainer Michael Matz said, "Since e's come from Floria, he's done very well. I couldn't ask him to be any better." 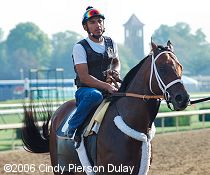 Bluegrass Cat came out after the break for a 1 1/4 mile gallop with trainer Todd Pletcher along on a pony horse. Pletcher's comments are down with Keyed Entry. 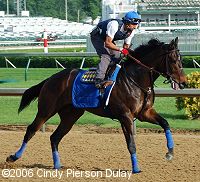 Bob and John came out along with Point Determined and both galloped 1 5/8 miles. 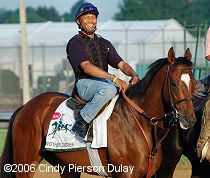 Brother Derek came out about 7:30am and galloped about 2 miles under trainer Dan Hendricks' chief assistant and No. 1 exercise rider Francisco Alverado who looks very happy to be there. 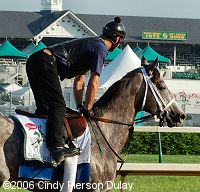 Flashy Bull came out after the break and galloped 1 3/8 miles then stood in the starting gate. 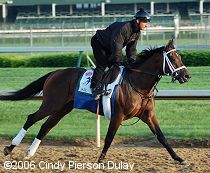 Jazil came out before the break and also galloped 1 3/8 miles and stood in the starting gate. 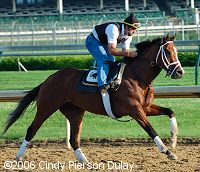 Keyed Entry came out shortly before the break and stood watching the action along with trainer Todd Pletcher on a pony horse for bit, then took a 1 1/4 mile gallop. Pletcher said of him and Bluegrass Cat, "They both went extremely well. They seem happy and so am I. I'm optimistic they are going to run well on Saturday. I'm not sure where they're going to finish, but I believe they'll give a good account of themselves." 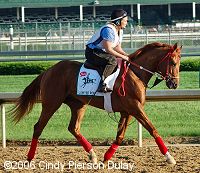 Lawyer Ron was out for a 2 miles gallop before the break with regular rider Betsy Couch up, although here he looks more like he is practicing his dressage moves. She said, "He was good this morning. Where he stumbled a little bit is where everybody changes leads and is the deepest part of the track and a little cut up." Trainer Bob Holthus said, "He gave us a little bit of a thrill there pulling up when he stublmed a little bit, but he's fine." 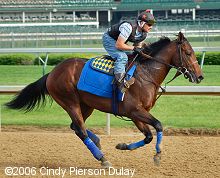 Point Determined came out along with Bob and John and both galloped 1 5/8 miles. 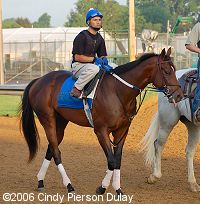 Private Vow schooled in the gate then galloped a mile. He is scheduled to school in the paddock later in the day. 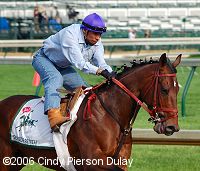 Seaside Retreat galloped 1 1/2 miles after the break. There were two alarms for loose horses during this but he handled it fine. Trainer Mark Casse said, "My heart's still pounding. I looked and only saw the pony girl. I was afraid something happened to my horse, but he didn't have any problems." 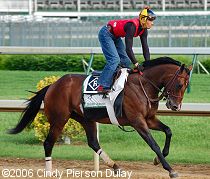 Sharp Humor galloped 1 1/2 miles shortly after 9am and is scheduled to school in the paddock later in the day. 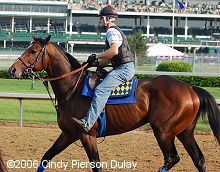 Sinister Minister came out after the other two Baffert horses were finished and also galloped 1 5/8 miles. 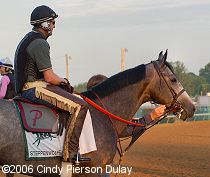 Steppenwolfer galloped about 1 5/8 miles and later schooled in the paddock. 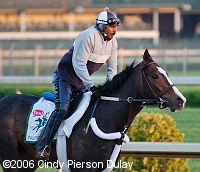 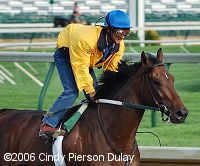 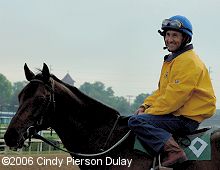 Jerry Bailey was out on a horse this morning with the helmet cam on, probably taping something for TVG's The Works show.