The feature race of the weekend at Woodbine was the $300,000 Dance Smartly Stakes (G2) on Sunday afternoon. A field of 6 older fillies and mares went 1 1/8 miles around one turn of the E.P. Taylor Turf Course under overcast skies and temperatures in the 80's. Ave was sent off as the 6-5 favorite off two straight third place finishes, in the Gallorette Handicap (G3) at Pimlico and the New York Stakes (G2) at Belmont. In to challenge her included 3-1 second choice Points of Grace, fourth in the Nassau Stakes (G2) at Woodbine last out, and 7-2 third choice Gypsy's Warning, off a win in the Eatontown Handicap (G3) at Monmouth Park in May.

Jockey Jim McAleney sent 42-1 longest shot First Circle to the lead soon after the start, and she set early fractions of 24.05, 46.27, and 1:09.15 over the firm course while being pressed by Points of Grace along the hedge and 6-1 Mekong Melody to her outside. On the far turn, First Circle tired badly and faded to finish last, as Mekong Melody moved up to take over the lead, opening up a 1 length advantage at the 1/8 pole through a mile in 1:33.23. Favorite Ave, who raced in fifth early just 2 lengths back, came out wide for the drive to launch an all-out drive for the finish, but the photo determined that Mekong Melody held her off by a nose in 1:46.09. It was another length back to Points of Grace third. 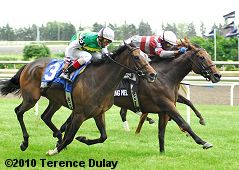 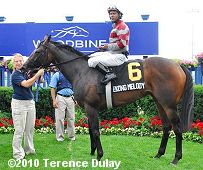 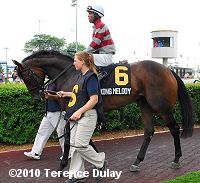 Left: Mekong Melody in the winner's circle. Her breeder and owner David Egan, based in England but in Toronto for the race said, "It's great, absolutely fabulous. Nancy and Roger have done a wonderful job. It's been a family affair with the filly. It's a lot of fun. I look forward to keeping her and breeding from her. I have friends of mine here. They've watched all of her races. They're lucky charms. It's been great." Asked why he sent the horse from England to North America he added, "We chose Canada. Woodbine in particular. You've got some great purses here. Great racing, good money, and when you hook up with great people like Roger and Nancy it's easy."

Right: Mekong Melody heads out of the paddock before the race. 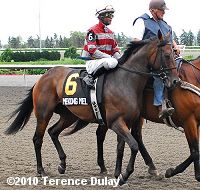 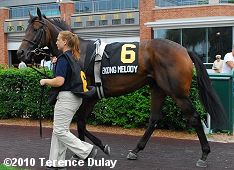 Left: Mekong Melody in the post parade. Nancy Sullivan, assistant to trainer Roger Attfield said, "It's Roger Attfield off the layoff, long on the grass. How could you worry? I'm sure he's thrilled. Patrick (Husbands, new jockey) worked this horse for us a couple of times on the training turf, including yesterday morning. He was very confident he could get her to relax a little bit. He knows her already."

Right: Mekong Melody in the walking ring before the race. 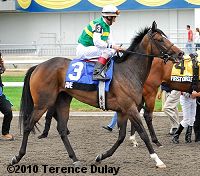 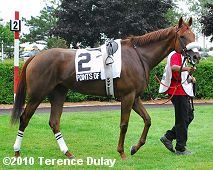 Left: Second place finisher and beaten favorite Ave returns after the race. The 6-5 favorite raced in stalking position fifth 2 lengths off the pace early under new jockey John Velazquez, came out for the drive but just missed, but completing a 1-2 sweep for her trainer. The Roger Attfield trainee improved her record to 4 wins, 2 seconds, and 3 thirds in 12 starts, earning $251,783 for owner Three Chimneys Racing LLC.

Right: Third place finisher Points of Grace in the paddock before the race. The 3-1 second choice pressed the pace early under regular rider Luis Contreras, was blocked briefly at the 3/16 pole but ran on well to finish third beaten 1 length at the line. The Malcolm Pierce trainee improved her record to 6 wins, 2 seconds, and 1 third in 13 starts, earning $483,810 for owner Live Oak Plantation.


An hour after the Dance Smartly, a field of 12 Ontario-bred 2-year-old fillies including 4 first-time starters sprinted 5 1/2 furlongs on Polytrack in the $150,000 Shady Well Stakes. Roxy Gap was sent off as the 3-5 favorite off a 6 1/2 length win in her debut in a maiden special weight last out. In to challenge her included 6-1 second choice I'm No Toy, winner of her debut in maiden-claiming company last out, and 8-1 third choice Pass Partout, second in her debut last out in a maiden special.

Jockey Jono Jones sent 17-1 Tree Pose to the lead soon after the start and she set quick fractions of 22.14 and 45.49 while being pressed by 32-1 Best Camper to her inside and Roxy Gap to her outside. Entering the stretch, Best Camper tired badly and faded to last, while Roxy Gap moved up to challenge the pacesetter. Tree Pose and Roxy Gap battled to the 1/16 pole until Roxy Gap dismissed the pacesetter, drawing off late to win by 2 1/2 lengths in 1:03.14, just 0.44 seconds off Legal Move's track record. It was a long 5 1/2 lengths back to late-running Pass Partout third. 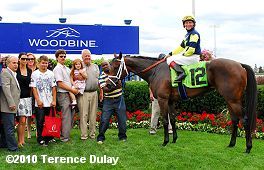 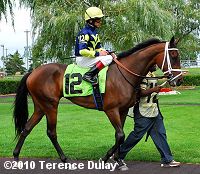 Left: Roxy Gap in the winner's circle with trainer Mark Casse on the far left. Casse said, "She trained really well. We had never really let her do a lot. Until you push down on the gas pedal, you never know how good they are. I don't get usually get nervous (about large fields), but I was very nervous for this, I don't know why. Maybe because I think she could be a really good horse. I figure if she could repeat the performance she had in his first start she would be competitive in this one."

Right: Roxy Gap in the walking ring before the race. Her jockey Corey Fraser said, "She broke really sharp and I was in the zone. After breaking so well, I was very sure we were going to win. I didn't think it was going to be smart to go up and be part of a 3 or 4 horse speed duel. I figured she was much the best that I could just sit off them." 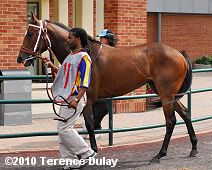 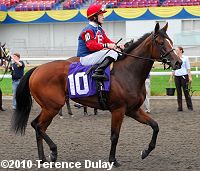 Left: Second place finisher Tree Pose heads into the paddock before the race. The 17-1 shot led early under jockey Jono Jones, battled with the winner to the 1/16 pole but was outfinished late while clearly the best of the rest. The William Tharrenos trained daughter of Old Forester improved her record to 1 win and 1 second in 2 starts, earning $64,200 for owner Six Brothers Stable.

Right: Third place finisher Pass Partout returns after the race. The 8-1 second choice raced in 5th early 3 lengths off the pace under jockey Jim McAleney, came out 5 wide for the drive but failed to gain, finishing third beaten 8 lengths at the line. The Mike Doyle trained daughter of Tiznow improved her record to 1 second and 1 third in 2 starts, earning $30,180 for owner-breeder Eaton Hall Farm.