Woodbine Racetrack in Toronto hosted two stakes races on Saturday afternoon over the E.P Taylor Turf Course, each at 1 1/8 miles around one turn. Overnight rains and overcast conditions resulted in a "good" turf course, with the temporary rail 30 feet out. The highlight of the card was the $300,000 Dance Smartly Stakes (G2) for older fillies and mares. A field of seven entered, with Sam-Son Farm homebred Quiet Jungle sent off as the 7-5 favorite, exiting a close second place finish in the Nassau Stakes on May 31. Callwood Dancer, who defeated Quiet Jungle in the Nassau, was the 3-1 second choice for trainer Roger Attfield, with Steve Asmussen trainee The Niagara Queen the 5-1 third choice, fifth in the Nassau last out and winless since September. 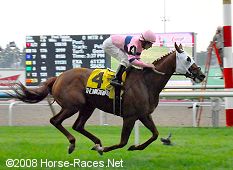 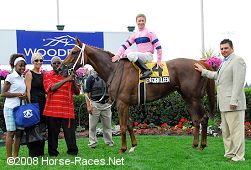 The Niagara Queen in the winner's circle. Steve Flint, assistant to winning trainer Steve Asmussen said, "It was her third start after a layoff. That's usually a horse's best race. She had worked exceptionally well." The Niagara Queen, who is now a five-time winner, increased her career earnings to $571,219. 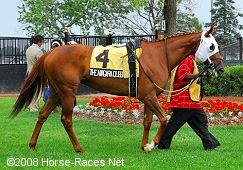 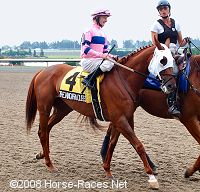 Left: The Niagara Queen in the paddock before the race. Her jockey Jim McAleney said, "Around the bottom of the turn, I had a ton of horse. I thought it was going to take a real horse to outsprint us. Steve (Flint, assistant trainer) had told me that this filly was doing better than ever. I knew I could ride her with a ton of confidence." 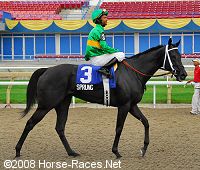 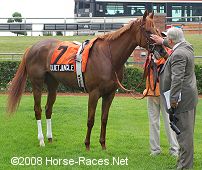 Left: Second place finisher Sprung returns after the race. The 8-1 fifth choice stalked the pace in third under jockey Patrick Husbands closed three-wide into the lane but could not get by the eventual winner. The Mark Casse trainee improved her record to 3 wins, 2 seconds and 1 third in 12 starts, earning $274,764 for owner Woodford Racing LLC.

Right: Third place finisher and beaten favorite Quiet Jungle in the paddock with trainer Mark Frostad. The 7-5 favorite rated off the pace in fifth early under new jockey Emile Ramsammy, came out four wide for the drive, but evened out late to finish third, just a neck behind Sprung. The Mark Frostad trainee improved her record to 2 wins, 2 seconds, and 2 thirds in 8 starts, earning $238.955 for owner-breeder Sam-Son Farm.


On the undercard of the Dance Smartly, a field of seven 3-year-olds also went 1 1/8 miles on the turf in the $100,000 Toronto Cup Stakes. Marlang was sent off as the 8-5 favorite over 2-1 Barreling Home, with Secret Getaway the 5-1 third choice on the toteboard.

Barreling Home battled on the front end with 6-1 Find The Wire and Marlang for the first half mile through fractions of 24.34 and 48.08 over the good course, with Secret Getaway stalking them the whole way to their outside. Entering the turn, Marlang poked his head in front as Find The Wire dropped from contention, getting 3/4 in 1:13.22. At the top of the stretch, jockey Emma-Jayne Wilson asked Secret Getaway for run and he responded, taking over the lead at the 3/16 marker and drawing clear through the stretch, cruising under the line 3 3/4 lengths ahead of Barreling Home in 1:52.54. It was another 4 lengths back to favorite Marlang third. 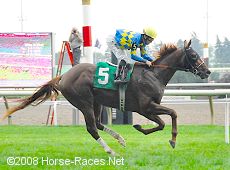 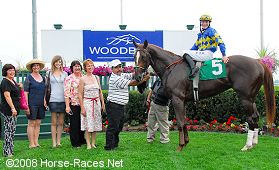 Secret Getaway in the winner's circle. 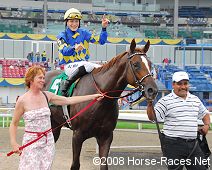 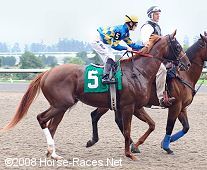 Left: Secret Getaway heads for the winner's circle. Winning jockey Emma-Jayne Wilson said, "As we turned for home, I had a good line down the lane. We made the lead a little sooner than I would have liked. His ears were up. He was looking at everything. He finished strong and gave me everything he had. He ran tremendous today, but he also had a really good effort on the Poly (in the Victoria Park Stakes). Time will tell (which surface is best for him)." 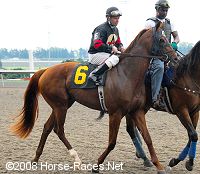 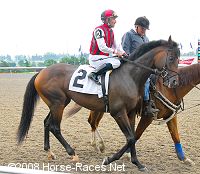 Left: Second place finisher Barelling Home returns after the race. Barreling Home was making his stakes and turf debut after winning an allowance race on the Polytrack at Woodbine last time out. Here he showed good early speed under jockey Todd Kabel, gained a short lead entering the turn, then yielded late. The Brian Lynch trained son of Awesome Again improved his record to 2 wins, 2 seconds, and 0 thirds in 5 starts, earning $104,575 for owner-breeder Frank Stronach.

Right: Third place finisher and beaten favorite Marlang in the post parade. Marlang won the one mile Charley Barley at Woodbine on the turf last time out for trainer Deborah England. Here he broke poorly, saved ground the whole way while close to the pace, but tired late, beaten 7 1/4 lengths. The son of Langfuhr improved his record to 2 wins, 0 seconds, and 1 third in 6 starts, earning $103,100 for owner-breeder Gus Schickedanz.