The richest horse race in North America on Saturday was the $1 million Canadian Trotting Classic at Mohawk Racetrack in Campbellville. A field of ten 3-year-old colts lined up behind the starter, but all eyes were on Hambletonian and World Trotting Derby winner Deweycheatumnhowe, who went into his elimination heat last week undefeated in 17 lifetime starts but was defeated, caught at the line by Crazed. The Ray Schnittker-trained and driven son of Muscles Yankee was sent off as the 6-5 favorite, despite drawing the most disadvantageous 10 post. Crazed, who won the Colonial at Chester after finishing second to Deweycheatumnhowe in the Hambletonian, was the 3-2 second choice exiting that upset win over his archrival in the eliminations. Clerk Magistrate, who won his elimination heat after finishing third in the World Trotting Derby in DuQuoin, was the 7-2 third choice with the rest of the field at double digit odds. Steady rain fell all afternoon and evening leading to a sloppy track but temperatures remained in the low 70's.

First time past the stands, driver-trainer Ray Schnittker immediately hustled the favorite Deweycheatumnhowe to the front, gaining the lead at the start of the clubhouse turn and moving down onto the pylons to save ground, and getting the initial quarter in 27 3/5 seconds. Crazed and driver Tim Tetrick, who stalked the favorite to his outside on the turn, moved up to challenge him on the backstretch and took over the lead getting the half in 56 2/5 and 3/4 in 1:25 1/5. Schnittker stayed on the rail in the pocket spot behind Crazed on the far turn. Crazed continued to lead to the 1/8 pole but began to tire, as Deweycheatumnhowe moved back out to the 2 path for room. Deweycheatumnhowe ran right by the tiring Crazed and opened up through the stretch. Clerk Magistrate, who was 4th early on, closed well late on the outside to pass Crazed but was left with too much to do, as Deweycheatumnhowe cruised under the line 2 lengths in front in 1:53 2/5. It was another 2 lengths back from Clerk Magistrate to Crazed, who was 5 1/2 lengths ahead of the rest of the field. 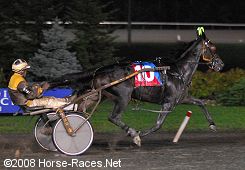 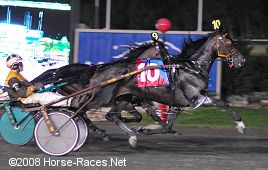 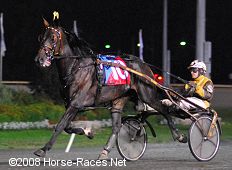 Right: Deweycheatumnhowe warms up before the race. Winning driver and trainer Ray Schnittker said, "He was his old self today. I think he’s a lot better (racing) out of the hole. Everybody could see that. I was thinking before the race about taking him right back to last. But after watching the races, nobody was coming from last and we were going for a million dollars. So I thought if he’s good, he could probably handle them. I left out of there hard. I was hoping someone would come and cover me up, which Crazed did, which worked out great. I knew if I got out (in mid-stretch), I’d win by 10. I got out, that was great." 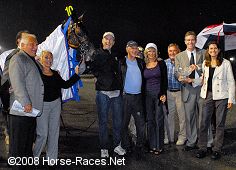 Left: Deweycheatumnhowe in the winner's circle with his large number of connections.

Right: Deweycheatumnhowe poses with his connections during the trophy presentation. Winning driver and trainer Ray Schnittker said, "I was pretty disappointed last week. But they all get beat. When we drew the 10-hole, I really didn’t like my chances, but he just showed me how good a horse he is. He’s an unbelievable horse. I think so (a better horse tonight than last week). Maybe I’ve shipped him too much. Probably won’t do that again, maybe fly him instead. He goes to the Kentucky Futurity (at the Red Mile in Lexington) in three weeks." 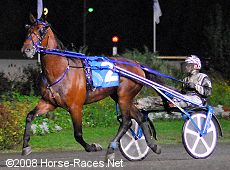 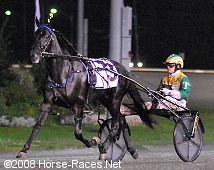 Left: Second place finisher Clerk Magistrate warms up before the race. The 7-2 third choice settled in fourth about 5 1/4 lengths off the pace for the first half mile, then responded when asked by driver Trevor Ritchie, passing the tiring Crazed inside the 1/8 pole to get second beaten 2 lengths in a time of 1:53 4/5, getting the final quarter mile in 28 1/5 seconds. The Per Henriksen trainee improved his record to 7 wins, 5 seconds, and 3 thirds in 20 starts, earning $1,001,946 for owners Asa Farm, Team Garberg, and Stall Sixpence of Norwood, Ontario.

Right: Third place finisher Crazed in the post parade. The 3-2 second choice took over the lead from Deweycheatumnhowe midway down the backstretch with regular driver Tim Tetrick, and led the field to the 1/8 pole before tiring to finish third beaten 4 lengths in a time of 1:54 1/5, getting the final quarter mile in 29 seconds. The Frank Antonacci trainee improved his record to 7 wins, 1 second, and 2 thirds in 14 starts, earning $828,016 for owners Lindy Racing Stable of Connecticut, Gary and Ellen Hoffman of Florida, and Robert Rudolph of New Jersey. 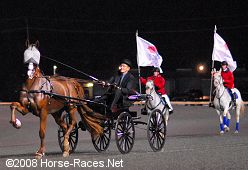 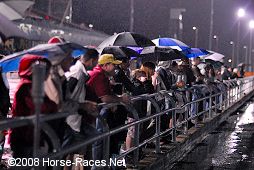 Left: Retired trotter Giosc Du Vivier, who formerly raced at Woodbine and Mohawk, leads the post parade for the Canadian Trotting Classic. The 14-year-old is now a Canadian Road Horse champion and was driven by his owner Lloyd Nugent. The Canadian Road Horse association is a non-profit organization formed to promote the alternative use of Standardbreds.

Right: A few soggy but dedicated lined the rail as the Canadian Trotting Classic went to post in the pouring rain.