The highlight of the Iowa racing season is the $300,000 Cornhusker Handicap (G3), for older horses going 1 1/8 miles at Prairie Meadows in Altoona. A field of 6 faced the starter on Saturday night, with Prayer for Relief sent off as the 9-10 favorite off consecutive runner-up finishes in the Texas Mile (G3) and the Lone Star Park Handicap (G3). In to challenge him included 8-5 second choice Silver Max, winner of the Opening Verse at Churchill Downs, and 4-1 third choice Taptowne, second in the Oaklawn Handicap (G2) three starts back before finishing in the money in two Churchill allowance events. 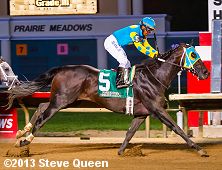 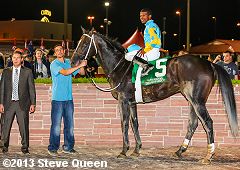 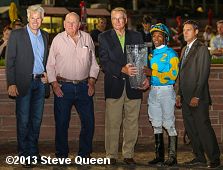 Left: Prayer for Relief in the winner's circle. He is the first Iowa Derby winner (2011) to also win the Cornhusker.

Right: The trophy presentation with Hall of Fame trainer Jack Van Berg (light shirt) who was at the track to sign his new book. Jockey Ricardo Santana Jr. said, "I knew I had a lot of horse. I tried to wait." 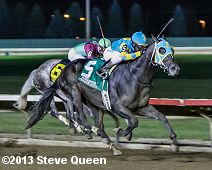 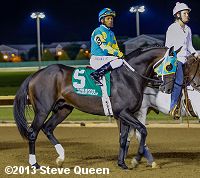 Right: Prayer for Relief leads down the stretch. Winning trainer Steve Asmussen said, "It was great to get him in the winner's circle. He has so much back class, and he was given a great ride." Asmussen said he will go next in the Governor's Cup at Remington Park. 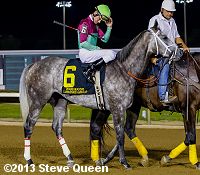 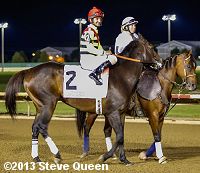 Left: Second place finisher Taptowne in the post parade. The 4-1 third choice stalked the pace under regular rider Calvin Borel, led early in the stretch but was no match for the winner. The Tim Glyshaw trainee improved his record to 5 wins, 5 seconds, and 3 thirds in 25 starts, earning $385,183 for owner-breeder Clovertowne Farm. 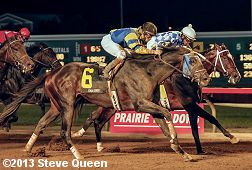 Immediately before the Cornhusker, a field of 7 three-year-olds contested the $250,000 Iowa Derby (G3) at 1 1/16 miles. Our Double Play was sent off as the 6-5 favorite off his win in the Prairie Mile. In to challenge him included 2-1 second choice Manando, third in the Affirmed Handicap (G3) at Hollywood, and 5-2 third choice Bashaar, second in the Prairie Mile.

Our Double Play went to the lead immediately and set fractions of 23.39, 46.99, and 1:11.54 while pressed by Manando. Entering the stretch, Our Double Play continued to lead, getting the mile in 1:37.71 before tiring in the final 1/16. 17-1 Looking Cool, fifth early, came out four wide for the drive and outfinished 7-1 Betweenhereandcool by a head in 1:44.29. It was another 1 1/4 lengths back to late-running Bashaar third, while favorite Our Double Play was another 3/4 length back in fourth.
Full results chart from DRF 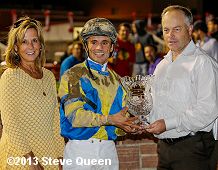 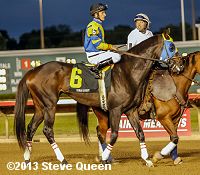 Left: Trophy presentation for the Iowa Derby. Winning jockey Leandro Goncalves said, "With 1/4 mile remaining I thought I had a shot to win."

Right: Looking Cool in the post parade. The Carl Nafzger trainee improved his record to 3 wins, 2 seconds, and 0 thirds in 10 starts, earning $237,877 for owner-breeder Jim Tafel. 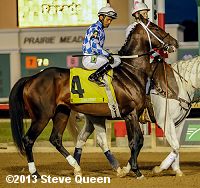 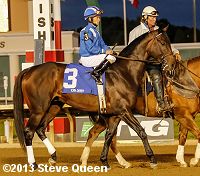 Left: Second place finisher Betweenhereandcool in the post parade. The 7-1 fourth choice stalked the pace in third under jockey Ricardo Santana Jr., then rallied but just missed. The Steve Asmussen trainee improved his record to 2 wins, 2 seconds, and 0 thirds in 6 starts, earning $126,600 for owner Jerry Durant.

Right: Third place finisher Bashaar in the post parade. The 5-2 third choice was last 14 lengths back early under jockey Joe Johnson, then rallied to get third beaten 1 1/2 lengths. The Dan Peitz trainee improved his record to 2 wins, 1 second, and 1 third in 8 starts, earning $106,182 for owner-breeder Shadwell Stable. 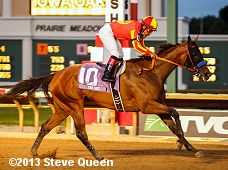 Kicking off the stakes action on Cornhusker night was the $200,000 Iowa Oaks (G3) for 3-year-old fillies goes 1 1/16 miles. Black-Eyed Susan Stakes (G2) winner Fiftyshadesofhay was sent off as the 6-5 favorite in the field of 10 over 3-1 second choice So Many Ways, winner of the Eight Belles (G3), and 4-1 third choice Hitechnoweenie, winner of the Panthers Stakes.

Jockey Calvin Borel sent So Many Ways to the lead and she set fractions of 23.12, 46.73, and 1:11.62 while pressed by Fiftyshadesofhay and 36-1 Canticle. Entering the lane, So Many Ways tired as Fiftyshadesofhay easily took over the lead. The favorite drew off through the stretch to win by 3 1/2 lengths over 6-1 Seaneen Girl in 1:44.65. It was another length back to So Many Ways third.
Full results chart from DRF 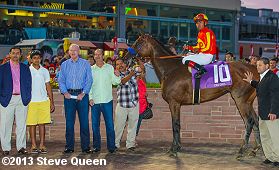 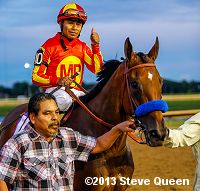 Left: Fiftyshadesofhay in the winner's circle. Jim Barnes, assistant to trainer Bob Baffert said, "All the wins are really big. Especially when you have to travel to do it. We love coming here. We didn't come here last year, but we've been here the last two years prior to that. It's a track we love coming to."

Right: Fiftyshadesofhay returns after the race. Trainer Bob Baffert added, "Fiftyshadesofhay was a nervous filly as a 2-year-old, especially at the gate, but she is so much more mature and professional now. She wandered around a bit when she made the lead, but I was pleased. She cooled out quickly after the race, is great (on Sunday), and we will send her on to Saratoga." 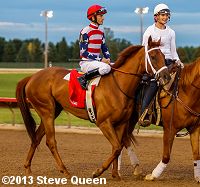 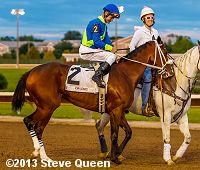 Right: Third place finisher So Many Ways in the post parade. The 3-1 second choice set the pace under jockey Calvin Borel but tired in the final 1/16 to hold third beaten 4 1/2 lengths. The Tom Amoss trainee improved her record to 4 wins, 0 seconds, and 2 thirds in 7 starts, earning $444,348 for owner Maggi Moss.