The first stakes race on the Woodbine turf for 2021 was the $175,000 Connaught Cup Stakes (G2) featuring older horses sprinting 7 furlongs in a very early prep for the Woodbine Mile (G1). Conditions were excellent at the historic Toronto oval, with partly cloudy skies and a race time temperature of 29 C (84 F). The temporary rail on the E.P. Taylor course was set out in Lane 3 (30 feet out) and the GoingStick reading was 10.4 (good-to-firm).

A field of 8 went to post with Avie's Flatter sent off as the 9-5 favorite off an allowance win in his 2021 debut on June 13 after finishing 4th in the Seagram Cup (G3) last July. In to challenge him included 7-2 second choice Chuck Willis, winner of 4 straight including an overnight handicap at Gulfstream last out, and 4-1 third choice Olympic Runner, 7th in the Seek Again at Belmont.

17-2 Silent Poet and Chuck Willis dueled for the early lead down the backstretch and around the turn through fractions of 23.46 and 46.18 while stalked by 28-1 longest shot Eskiminzin and favorite Avie's Flatter. In the stretch, jockey Luis Contreras sent Avie's Flatter to the front and he opened up a 1 1/2 length lead through 3/4 in 1:09.07. Olympic Runner, 6th early under Rafael Hernandez put in a strong late rally but ran out of ground as Avie's Flatter prevailed by a head in 1:20.99. It was another 2 1/4 lengths back to 21-1 Proven Strategies third. 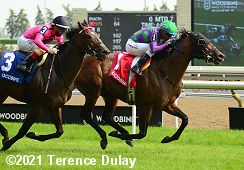 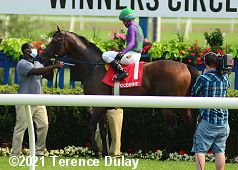 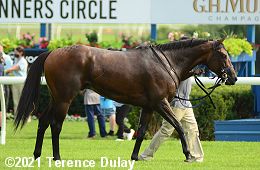 Left: Avie's Flatter in the winner's circle. Winning trainer Josie Carroll said, "That's what's really nice about him – we do have those options (to run on either turf or Tapeta) I think we'll just see how things develop and try and place him in the best spots we can."

Right: Avie's Flatter heads back to the barn after the race. Carroll added, "This is a really special horse and it's very exciting for us because he's finally come back to himself. He had a bit of an off year last year and he's just a monster this year. He's so happy. We came into this race very confident but respectful of the kind of horses that were in here." 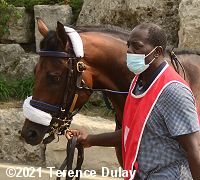 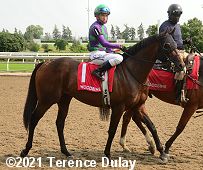 Left: Avie's Flatter walks over before the race. Winning jockey Luis Contreras said, "I got a great trip. He broke really sharp and I just wanted to sit behind the speed, and he was just dragging me the whole way. A win is a win and he runs good whatever the surface is." 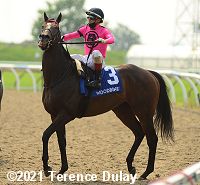 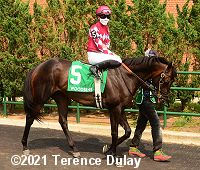 Right: Third place finisher Proven Strategies heads to the track before the race. The Mark Casse trainee improved his record to 4 wins, 3 seconds, and 2 thirds in 17 starts, earning $247,764 for owners D.J. Stable and Empire Racing Club.