The feature race on Sunday at Woodbine was the $200,000 Connaught Cup Stakes (G2) for older horses sprinting 7 furlongs on the E.P. Taylor Turf Course under sunny skies and temperatures in the mid 60's. Something Extra was sent off as the 11-10 favorite in the field of 9 (after 1 scratch), exiting consecutive second place finishes in the Gulfstream Park Turf Sprint and the Shakertown (G3) at Keeneland. In to challenge him included 11-2 second choice Hotep, fourth in a Keeneland allowance last out, and 13-2 third choice Upgrade, off a fifth place finish in the Jacques Cartier Stakes.

Jockey Eurico Rosa da Silva sent Something Extra to the lead down the backstretch and he set quick fractions of 22.64 and 45.09 over the firm course while stalked by 19-1 Bear No Joke and 10-1 Valentino Beauty. On the turn, Valentino Beauty moved up to challenge, getting within 1/2 a length of the favorite through 3/4 in 1:08.39. 8-1 Riding the River, 6th early, put in a strong late rally but Something Extra held him off by 3/4 length for the win in 1:20.54. It was just a neck back to Upgrade third. 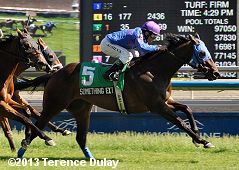 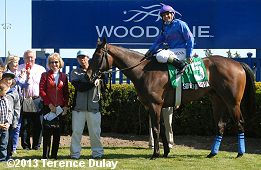 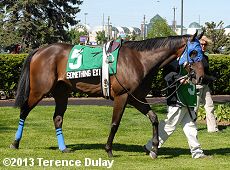 Left: Something Extra in the winner's circle. Winning jockey Eurico Rosa da Silva said, "When I warmed him up, he was so relaxed. He broke so sharp and was there to run. They opened the door (starting gate) and he wanted to be home quick. I knew he was going fast, but he was very happy. He enjoyed himself." This is Something Extra's second Connaught win, having also captured last year's edition.

Right: Something Extra in the paddock before the race. 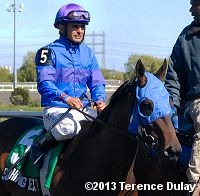 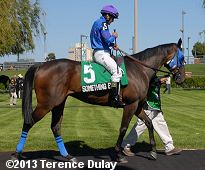 Left: Something Extra in the post parade. Trainer and co-owner Gail Cox said, "He's a nice horse and he's gotten better. It was a really tough trip (in the Shakertown.) He had a wall of horses in front of him and Julien (Leparoux) just couldn't get through. It was just bad luck."

Right: Something Extra heads out of the paddock. 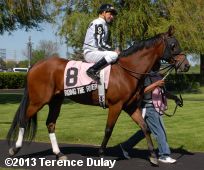 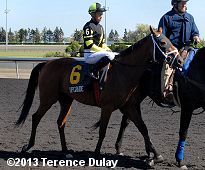 Left: Second place finisher Riding the River heads out of the paddock. The 15-2 fourth choice was sixth 5 lengths off the pace early under jockey Todd Kabel, then rallied late but was no match for the winner. The Dave Cote trainee improved his record to 8 wins, 3 seconds, and 2 thirds in 21 starts, earning $721,564 for owners Dominion Bloodstock, HGHR Inc., and Linmac Farm. Riding the River was named Champion Turf Male in Canada for 2012.

Right: Third place finisher Upgrade in the post parade. The 13-2 third choice was seventh 4 lengths off the pace early under jockey Luis Contreras, then rallied along the inside to get third beaten 1 length at the line. The Michelle Nihei trainee improved his record to 6 wins, 8 seconds, and 5 thirds in 25 starts, earning $399,586 for owner Dennis Narlinger. 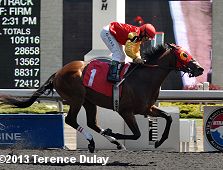 The undercard feature on Sunday was the $150,000 Marine Stakes for 3-year-olds going 1 1/16 miles on the Polytrack. Up With The Birds was the 6-5 favorite in the field of 5, second in the Transylvania (G3) at Keeneland after winning the Black Gold at Fair Grounds. In to challenge him included 7-5 second choice Winning Cause, winner of the Lexington (G3) last out, and 11-2 third choice Five Iron, second in the Woodstock. 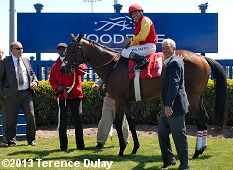 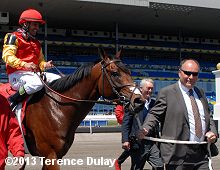 Left: Owner Rick Balaz of Sam-Son Farm leads Up With the Birds to the winner's circle. Winning jockey Eurico Rosa da Silva, who swept both stakes on the card, said, "He handled everything so easy. He's a wonderful animal." Asked if the colt could handle the 1 1/4 mile Queen's Plate on July 7, he added, "If it was two miles today, it would be even better."

Right: Up With the Birds in the winner's circle. Winning trainer Malcolm Pierce said, "He came into the race in good order and timing wise he's had plenty of space between races. Let's just keep our fingers crossed for six more weeks." The colt will train up to the Plate. 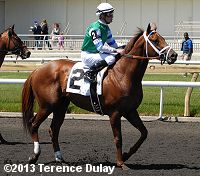 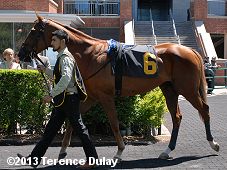 Left: Second place finisher Winning Cause returns after the race. The 7-5 second choice raced fourth 5 lengths off the pace early under jockey Julien Leparoux, rallied in the stretch but was no match for the winner, beaten 4 3/4 lengths. The Todd Pletcher trainee improved his record to 3 wins, 2 seconds, and 0 thirds in 8 starts, earning $235,213 for owner Alto Racing LLC.

Right: Third place finisher Five Iron in the paddock before the race. The 11-2 third choice stalked the pace second or third under jockey Luis Contreras, but could not improve position late, finishing third beaten 5 lengths. The Brian Lynch trainee improved his record to 1 win, 2 seconds, and 1 third in 8 starts, earning $125,182 for owner-breeder Frederick Michael Allor.