The feature race on Sunday at Woodbine was the $150,000 Connaught Cup Stakes (G3), the first stakes on the turf in Canada for 2010. A field of 10 (after 2 scratched the morning of the race) went to post in this 7 furlong sprint around one turn of the E.P. Taylor Turf Course, on a warm sunny afternoon in Toronto with temperatures in the mid 80's. Rahy's Attorney was sent off as the 5-2 favorite exiting a close second in the Appleton (G3) at Keeneland last out, but winless since the Bunty Lawless last October. In to challenge him included 4-1 second choice Field Commission, fourth in the Vigil (G3) three weeks ago, and 9-2 third choice and 2008 Queen's Plate winner Not Bourbon, making his turf debut off consecutive Polytrack wins in the Overskate in September and an allowance last out.

11-1 Successful Mission battled for the lead with 16-1 Major Marvel down the backstretch through fast early fractions of 23.34 and 45.44 over the very firm turf course, with 9-1 Jungle Wave stalking them in third early. Turning for home a cavalry charge ensued as the two pacesetters tired and faded from contention. 5-1 Grand Adventure, who was 5th early, came out five wide into the lane to take a short lead over Jungle Wave at the 1/8 pole through 3/4 in 1:08.12. Grand Adventure kicked clear late, easily holding off late-running Field Commission by a length to get the victory in 1:19.83, just 0.45 seconds off the course record. It was just a neck back from Field Commission to Jungle Wave third, while favorite Rahy's Attorney finished 6th. 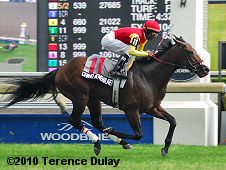 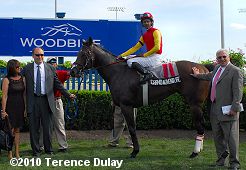 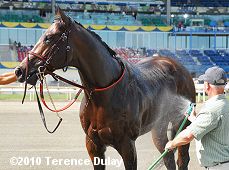 Left: Grand Adventure in the winner's circle with owner Rick Balaz holding his head and trainer Mark Frostad at his hip. Balaz said, "Mark's done a great job with him. We have a great program. We've had great years in the past - I want to touch wood somewhere - it appears everything's coming together really nicely this year for us." 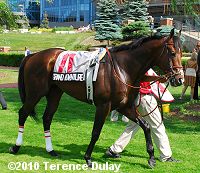 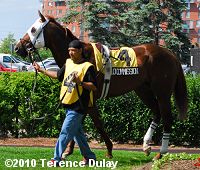 Left: Grand Adventure in the paddock before the race. His trainer Mark Frostad said, "We sort of threw him to the wolves last year. He's matured. It looked today like he'd go another furlong or two."

Right: Second place finisher Field Commission in the paddock before the race. The 4-1 second choice raced in 8th early about 5 lengths off the pace under new jockey Eurico Rosa da Silva, angled out midstretch and surged late to get second beaten 1 length at the line. The Daniel Vella trainee improved his record to 6 wins, 7 seconds, and 4 thirds in 22 starts, earning $924,968 for owners Edward Seltzer and Daniel Vella. 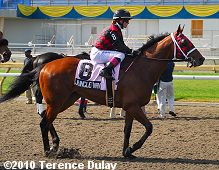 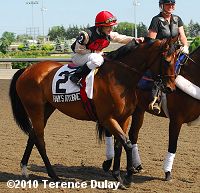 Left: Third place finisher Jungle Wave returns after the race. The 9-1 fifth choice stalked the pace in third under jockey Chantal Sutherland, put in a bid at the 3/16 pole but was outfinished, getting third beaten 1 1/4 lengths. The Sid Attard trainee improved his record to 7 wins, 1 second, and 3 thirds in 16 starts, earning $108,261 for owner Tucci Stables.

Right: Sixth place finisher and beaten favorite Rahy's Attorney in the post parade. The 5-2 favorite raced in 6th, 3 1/2 lengths off the early pace under new jockey Jim McAleney while saving ground on the rail, was blocked in mid-stretch, then drifted out gradually the rest of the way finishing 6th beaten 2 1/4 lengths. The Ian Black trainee has a record of 10 wins, 5 seconds, and 4 thirds in 29 starts, earning $1,665,592 for owner-breeder Ellie-Boje Farm.