The feature race on Saturday at Del Mar was the $300,000 Clement L. Hirsch Stakes (G1) for older fillies and mares at 1 1/16 miles on the main track, and is a Breeders' Cup Challenge "Win and You're In" qualifier for the Distaff (G1), contested under sunny skies and tempertures in the mid 70's. As expected Beholder was sent off as the 1-10 favorite in the field of 5, winner of 8 straight including last year's Hirsch and off her Vanity Mile (G1) win at Santa Anita. In to challenge her included 9-2 second choice Stellar Wind, runner-up in both the Breeders' Cup Distaff (G1) and Vanity Mile, and 25-1 third choice Divina Comedia, winner of the Southern Truce Stakes.

Past winners of the Clement L. Hirsch Stakes 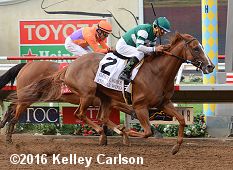 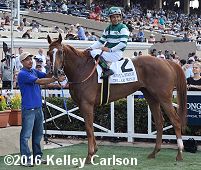 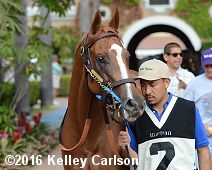 Left: Stellar Wind in the winner's circle. Winning trainer John Sadler said, "You usually don't get what you want on your (60th) birthday, but this year, I did. She's been training well. She won here last year. And if you think about it, she probably was the best in the Breeders' Cup Distaff -- I don't think anybody would dispute that. She had a prep race (Vanity, June 4) that was a good race. Victor got off her and said 'You know, I think we can beat (Beholder) next time.' I kept my mouth shut because I didn't want to look like an idiot, but we thought we had a chance. The difference was having a race and this one (1 1/16 miles) being a little longer. It's good for her and she's an improving, lightly-raced horse. We're kind of following Beholder a little bit. She's a lightly raced mare and we'd like to race her two more years. She's not a horse to run every month, so we'll probably run her in the Zenyatta and then the Breeders' Cup Distaff."

Right: Stellar Wind heads into the paddock before the race. Winning jockey Victor Espinoza said, "There were no special instructions. It was just a matter of 'Ride the race the way it comes up.' She came out of there a little slow and I had to move her up to get position. But she was good with it. The last time she needed the race. This time she was ready. This was exciting. I knew I was riding against a Hall of Fame jockey on top of the best mare in the country. That's hard. That's not easy at all. But some luck and some skill got it done. I knew she was working well. Her works were excellent. So I had a lot of confidence in her today. When I came up alongside Gary, it was exciting. She's a special filly. She showed it today." 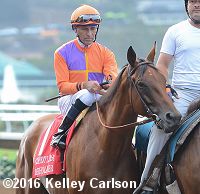 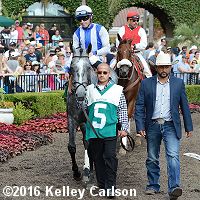 Left: Second place finisher and beaten favorite Beholder in the post parade. Jockey Gary Stevens said, "She ran her race. You've got to give (Stellar Wind connections) credit. (Beholder) was comfortable up front. The fractions weren't hard for her. At the three-furlong pole, I saw that shadow (Stellar Wind) and I knew we might have a race. My mare hit another gear at the 3/16, but (Stellar Wind) stayed right with us. I was surprised that she was staying with us. All credit to them. They were ready and they ran great." Trainer Richard Mandella added, "It was a good race for my horse. That other mare ran a helluva race."

Right: Third place finisher Divina Comedia in the paddock before the race. Jockey Joe Talamo said, "She ran great. I was riding hard, but I was watching what was going on up front. No shame for my mare to run third to those two."