The feature race on Saturday at Del Mar was the $300,000 Clement L. Hirsch Stakes (G1) for older fillies and mares at 1 1/16 miles over the Polytrack, and is a Breeders' Cup Challenge "Win and You're In" qualifier for the Distaff (G1). 27,882 fans came out to the seaside oval under cloudy skies and tempertures in the low 70's. 2013 Breeders' Cup Distaff winner Beholder was sent off as the 3-10 favorite in the field of 8, off 3 straight wins including the Santa Lucia and the Adoration (G3). In to challenge her included 8-1 second choice Warren's Veneda, fifth in the Great Lady M Stakes after fourth in the Vanity (G1), and 11-1 Honey Ride off an allowance win at Santa Anita. 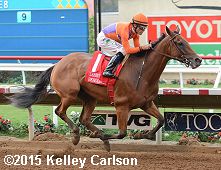 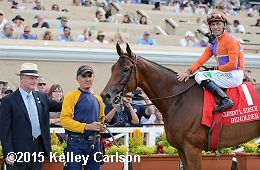 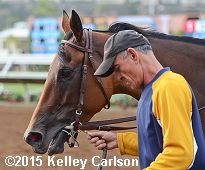 Left: Beholder in the winner's circle. Winning trainer Richard Mandella said, "We may take a look at the Pacific Classic. It has been in the back of my mind a while. The timing is good. We're far enough away from the Breeders' Cup to do it. The question will be that it's three weeks and will she look good enough to do that. It'll be up to her and Mr. Hughes, obviously. I'll have to get his approval. I was glad to see that she got out of the inside and got in the clear where she wouldn't be compromised in her chance to win anyway. Gary did a masterful job of doing that and when they went down the backside it looked like poetry."

Right: Beholder heads back to the barn after the race. Winning jockey Gary Stevens said, "She's just amazing; she's scary. I worked her the other day and got off and said ‘Boss, I don't know how this is possible, but I think she's getting better.' She's improving and things are getting easier for her. She went from being a cantankerous kid to a laid-back grandma. I told Richard I was just going to let her fall out of there today and see where I was going into the first turn. That we'd figure it out from there. We had a spot and they slowed it down on us. Finally, I just said ‘That's it,' and I let her go. Her acceleration just put us in front without really trying. The race was effectively over at the 6 1/2. She's just too much. This isn't work, I'll tell you. This is fun." 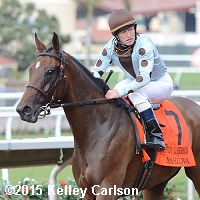 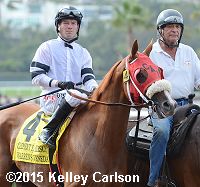 Left: Second place finisher Yahilwa returns after the race. Jockey James Graham said, "James (trainer Cassidy) can train one up. He had her ready. A few things go differently out there, and she might have been chasing me home. I'm not going to say we'd beat her, but I think it might have been closer."

Right: Third place finisher Warren's Veneda in the post parade. Jockey Tyler Baze said, "No pace. Just no pace. Everyone was running for a piece. What are you going to do? We've got to have pace. And we gave that mare weight (123 to 121)."