The feature race on Thanksgiving Friday at Churchill Downs is the $600,000 Clark Stakes presented by Norton Healthcare (G1), a 1 1/8 mile test over the main track for older horses. Conditions were typical for Louisville in late November, with overcast skies and temperatures in the mid 40's, with the main track rated fast and the Matt Winn turf course yielding. Tom's d'Etat was sent off as the 9-10 favorite in the field of 11 off his win in the Fayette (G2) at Keeneland after finishing 4th in the Woodward (G1) at Saratoga. In to challenge him included 5-1 second choice Owendale, 10th in the Breeders' Cup Classic (G1) after winning the Oklahoma Derby (G3), and 7-1 third choice Seeking the Soul, winless since the Stephen Foster (G2) and 6th in the Breeders' Cup Classic. 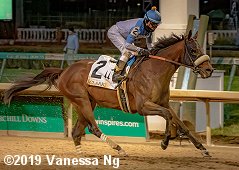 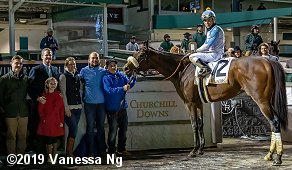 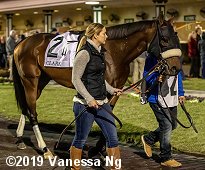 Tom's d'Etat in the winner's circle. Winning trainer Al Stall Jr. said, "There are a lot of Grade 1 horses in this game that don't make Grade 1 races. To have a horse like this is extremely special for our entire barn. The care this horse gets day in and day out is amazing. I'm surprised he doesn't gain more weight with how often he gets to graze. (The Pegasus World Cup) was on a funky racetrack in January. He ended up getting a pretty bad abcess in his hind and he just wasn't right after the race. We saw some footage of him training and knew he wasn't right. He was able to take care of himself in that race and we were able to give him the time off he needed to heal from the injury and doing right by him shows us how important that can be – look where we are now."

Right: Tom's d'Etat in the paddock before the race. Winning jockey Joel Rosario said, "He ran unbelievable. It was such a good effort from him tonight to be able to sit behind the speed like that. He had such a strong kick in the stretch and won easily." 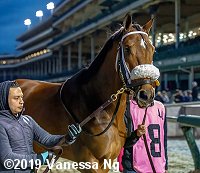 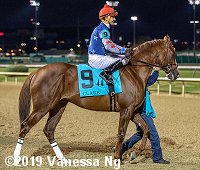 Left: Second place finisher Owendale walks over before the race. Trainer Brad Cox said, "We're very proud of him. He was able to rebound from the Breeders' Cup Classic and run a very good effort today against this type of competition when he's only 3-years-old." Jockey Florent Geroux added, "It was a good effort closing ground into that pace. I got him down to the rail at the end and he was able to rally for second. I don't think we would've caught the winner but he ran a good effort."

Right: Third place finisher and beaten favorite Mr Freeze in the post parade. Trainer Dale Romans said, "Thought we had them there for a second. He ran a great race against a really quality field. There are some nice horses in this race and (Tom's d'Etat) is a really quality horse."

The entire field shortly after the start of the Clark Stakes. Joe Talamo aboard 4th place finisher Draft Pick (post 1) said, "It was a good effort and he tried the entire way." 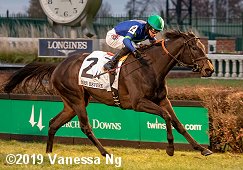 An hour before the Clark, a field of 12 three-year-old fillies went to post in the $300,000 Mrs. Revere Stakes (G2), a 1 1/16 mile trip over two turns of the Matt Winn Turf Course. New and Improved was sent off as the 2-1 favorite off her win in the Sands Point (G2) at Belmont Park. In to challenge her included 3-1 second choice The Mackem Bullet, 3rd in the Valley View (G3) after winning the Appalachian (G2) at Keeneland, and 11-2 third choice Dalika, 5th in the Valley View.

Jockey Julien Leparoux sent 8-1 fifth choice Hard Legacy to the lead first time by and she set fractions of 24.54, 50.25, and 1:16.42 while pressed by 23-1 Amandrea and stalked by 33-1 She'sonthewarpath and The Mackem Bullet. Entering the stretch the pacesetters tired as Dalika, 6th early, swept 5 wide to lead through 1 mile in 1:42.14. 7-1 fourth choice Nay Lady Nay, 7th early under Junior Alvarado, turned for home 4 wide and came through on the inside to win by 1/2 a length in 1:48.52. It was another 1 1/2 lengths back to The Mackem Bullet third, while favorite New and Improved trailed throughout and passed tired horses late to finish 7th beaten 7 3/4 lengths.
Full results chart from DRF 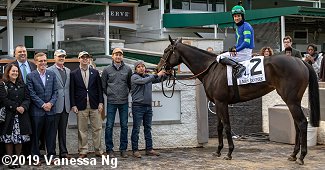 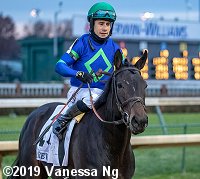 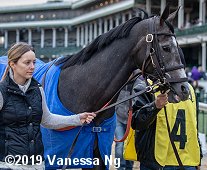 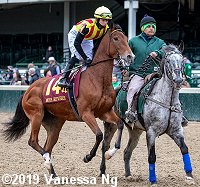 Left: Second place finisher Dalika walks over before the race. Trainer Al Stall Jr. said, "She ran a great race. We're really proud of her effort. She showed a lot of grit and determination. (Nay Lady Nay) was just able to get through in the final stages." Jockey Luis Saez added, "She tried hard the entire way but (Nay Lady Nay) was able to get through and we couldn't quite hold her off."

Right: Third place finisher The Mackem Bullet in the post parade. Jockey Tyler Gaffalione said, "We sat a very good trip and ran very well. When those other horses got to her in the stretch she kept fighting but couldn't hold them off." 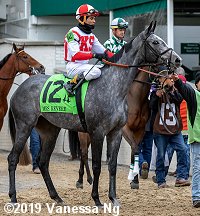 Seventh place finisher and beaten favorite New and Improved heads out to the track before the race. Jockey Joel Rosario said, "I don't think she really got over the surface well. She never was able to pick up her stride."