The last Grade 1 of the New York racing season is the $750,000 Cigar Mile Handicap (G1). This 1 mile trip around one turn of the Aqueduct main track for older horses often plays a role in deciding Eclipse Award champions in certain categories. Conditions were typical for early December, with overcast skies and temperatures in the mid 40's, and the main track fast. Pennsylvania Derby (G1) third place finisher Americanrevolution was sent off as the lukewarm 11-4 favorite in the field of 8 off his win in the Empire Classic Handicap. In to challenge him included 7-2 second choice Following Sea, winner of the Vosburgh Stakes (G2) before finishing third in the Breeders' Cup Sprint (G1), and 15-4 third choice Independence Hall, winner of the Fayette Stakes (G2).

Jockey John Velazquez sent Following Sea to the lead exiting the chute through fractions of 23.19 and 46.04 while pressed by 4-1 fourth choice Ginobili and stalked by 19-2 Olympiad. Turning for home, Ginobili gained a short lead through 3/4 in 1:10.20 before fading in the lane, allowing Following Sea to retake the lead through 7/8 in 1:23.16. Americanrevolution, 6th early under Luis Saez, came out 3 wide into the stretch and despite bumping with 19-1 Plainsman at the 3/16 pole, continued his rally to win by 1/2 a length over Following Sea in 1:36.68. It was another 2 1/2 lengths back to Plainsman third. There was a stewards' inquiry into the bumping incident but the result was allowed to stand. 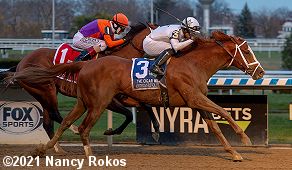 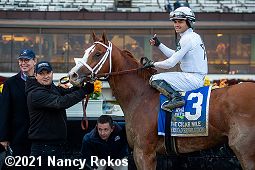 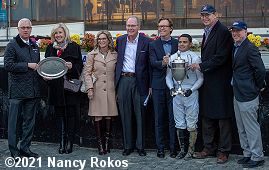 Left: Americanrevolution in the winner's circle. Winning trainer Todd Pletcher said, "We weren’t 100 percent positive about the mile, but a lot of times good horses do multiple things really well and I think he’s a great example of that. Constitution puts so much determination into his offspring and they’re just like he was – very tough horses and versatile. It’s great to see him get that Grade 1 win. He’s a rare horse that when you look at his figures, he’s improved every single start of his life. That’s great to see. It was a hard-earned win today, but he fought on."

Right: The trophy presentation for the Cigar Mile. Winning jockey Luis Saez said, "When he came around the three-eighths he was a little bit off the bit. I had to start riding him to get the momentum and at the top of the stretch, when he switched leads, he gave me that kick. After that, I knew I could win the race but I wasn't sure because I still had Following Sea in front of me and he was battling but in the end Americanrevolution made his move and he got there." 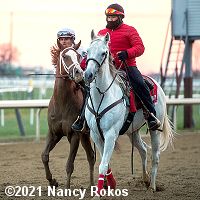 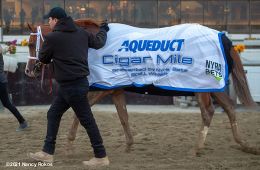 Left: Americanrevolution returns after the race. Saez added, "I feel like Manny [Franco, aboard Plainsman] tried to come out and he was trying to push me away and wanted my spot, but I was in my lane and it looked like the horse inside came out a little bit too and that's what made it look like that. That's a big deal [on beating open company]. He's getting better and better with each race and today he proved he's a nice horse and a very good horse."

Right: Americanrevolution heads back to the barn. Pletcher added, "The way he ran the mile and an eighth would give you hopes he would be a Classic type horse. I think the plan is to send him to WinStar now and give him a bit of a freshening." 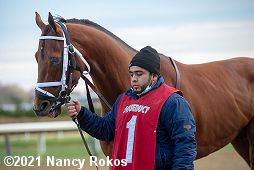 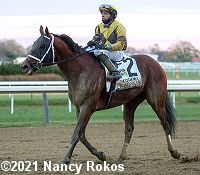 Left: Second place finisher Following Sea walks over before the race. Trainer Todd Pletcher said, "I thought he ran great. Johnny did a super job just letting him find his way up to the lead. He was under pressure most of the way and it looked like Ginobili had put a good neck in front of him and he kept fighting back. He ran a big race." Jockey John Velazquez added, "Rough day for me. The horse ran great. Nothing you can do."

Right: Third place finisher Plainsman returns after the race. Jockey Manny Franco said, "I was trying to pick my spot. I was in-between and I think it was 50-50. The horse closed in on me a little bit, but my horse ran a great race."


The $250,000 Remsen Stakes (G2) featured a field of 8 two-year-olds going 1 1/8 miles on the main track. It is also a points-scoring race with the winner earning 10 points in the Road to the Kentucky Derby. Belmont Park debut winner Zandon was sent off as the 6-5 favorite over 7-5 second choice Mo Donegal, a winner at second asking at Belmont, and 13-2 third choice Judge Davis, off his third place finish in the Nashua Stakes (G3).

Jockey Manny Franco sent 12-1 Fromanothamotha to the lead first time by and he set easy fractions of 25.18, 51.47, and 1:16.34 while pressed by 41-1 longest shot Midnight Chrome and stalked by Zandon. Turning for home, Fromanothamotha tired badly as Mo Donegal, 4th early under Irad Ortiz Jr., swept to the lead 5 wide through 1 mile in 1:41.28, setting up a duel to the line. Mo Donegal prevailed by a nose in 1:53.61, and it was a long 9 3/4 lengths from Zandon back to Midnight Chrome third. There was a stewards' inquiry into the stretch duel but the result stood. 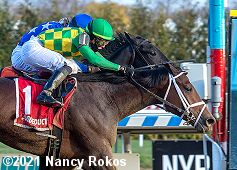 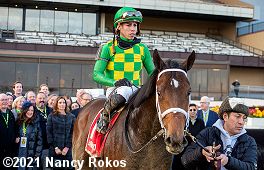 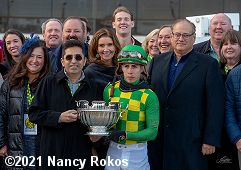 Left: Mo Donegal in the winner's circle. Winning jockey Irad Ortiz Jr. said, "I was looking for some room [at the turn for home] and there were four horses in front of me. So, I had to wait a few jumps and go around. It probably cost me a length and a half. He idled a little bit. He’s a young horse and I tried to meet the other horse and keep going. As soon as he got to the other horse, he fought back. He was ready."

Right: The trophy presentation for the Remsen Stakes. Winning trainer Todd Pletcher said, "I thought he ran great. He was getting a good, ground-saving trip and put himself in a good spot. He kind of had to angle out a little bit and lost some ground there but it looked like when he got there he is still trying to figure out how to polish it off. The other horse battled back." 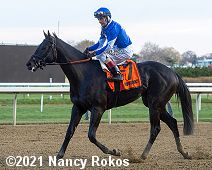 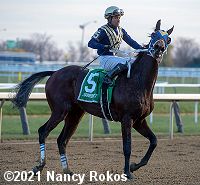 Left: Second place finisher and beaten favorite Zandon returns after the race. Trainer Chad Brown said, "We got beat an inch. I thought we had the best horse in the race, so it’s disappointing. But he’s a nice horse so we’ll get him going and train him towards the Derby." Jockey John Velazquez added, "My horse ran a good race - a winning race. Right at the sixteenth pole, [Mo Donegal] got on top of me and I just missed. He laid on top of me right before the wire and just beat me by very little."


The $250,000 Demoiselle Stakes (G2) is for 2-year-old fillies also going 1 1/8 miles, and scores 10 points in the Road to the Kentucky Oaks. Tempted Stakes (G3) third place finisher Nest was sent off as the 7-4 favorite in the field of 8 over 5-2 second choice Tap the Faith, a debut winner at Belmont last out, and 5-1 third choice Magic Circle, fourth in the Frizette (G1) before finishing a close second in the Tempted.

Jockey Manny Franco sent Magic Circle to the lead around both turns through fractions of 25.05, 50.72, and 1:15.80 while pressed by 21-1 Full Count Felicia and stalked by 6-1 fourth choice Venti Valentine. Entering the lane Magic Circle continued to lead through 1 mile in 1:41.33 but Nest, 4th early under Irad Ortiz Jr., came out 5 wide for room and rallied to win by a neck over Venti Valentine in 1:55.07. It was another 3/4 length back to Magic Circle third. 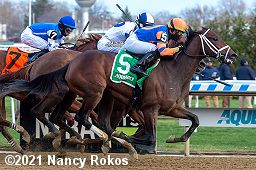 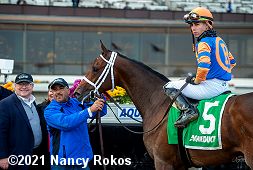 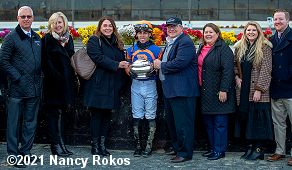 Left: Nest in the winner's circle. Winning jockey Irad Ortiz Jr. said, "She ran a good race today, we were looking forward to the distance and she got the job done. I knew [Magic Circle] was inside and came out. I was just surprised that they claimed foul on me, honestly. I grabbed a hold of my filly, corrected her, went to the left hand and went straight. I didn’t do anything to the other horse so I don’t know why they claimed foul, but it is what it is."

Right: Trophy presentation for the Demoiselle Stakes. Winning trainer Todd Pletcher said, "There have been some tight finishes and a little drama to go along with it, but I’m thankful to be on the right side of it all. She [Nest] was never able to take over and save much ground, but she got the job done. I’m obviously very happy to be on the winning end. We’ll take her to Palm Beach Downs and map out a game plan with Mike [Repole] and the rest of the owners, but she’ll get a freshening after this win." 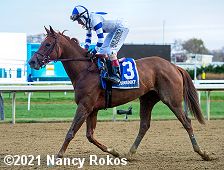 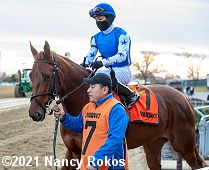 Left: Second place finisher Venti Valentine returns after the race. Trainer Jorge Abreu said, "She ran her race. I thought she was going to run the way she ran. Unfortunately [Magic Circle] had to come out and she kind of stopped her momentum, but she ran a very good race." Jockey John Velazquez added, "[Magic Circle] came out and stopped my momentum. By the time the other one got to her, she got intimidated. The horse leaned a little bit, but never touched me."

Right: Third place finisher Magic Circle heads out to the track before the race. The Rudy Rodriguez trainee improved her record to 1 win, 1 second, and 1 third in 4 starts, earning $139,000 for owner J.W. Singer.


The distaff counterpart of the Cigar Mile is the $250,000 Go For Wand Handicap (G3) for older fillies and mares over the one-turn mile. Gallant Bloom Handicap (G2) runner-up Lady Rocket was sent off as the 6-5 favorite in the field of 6 off her win in the Pumpkin Pie Stakes. In to challenge her included 2-1 second choice Sharp Starr, winner of the Empire Distaff Handicap, and 4-1 third choice Bella Vita, winner of the Betty Grable Stakes at Del Mar. 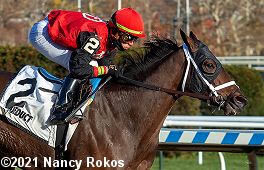 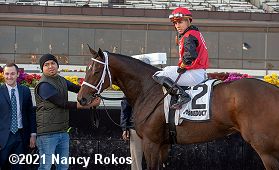 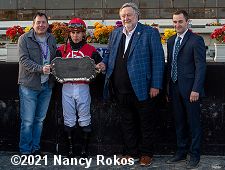 Right: The trophy presentation for the Go For Wand Handicap. Dustin Dugas, assistant to winning trainer Brad Cox said, "She was very comfortable down the backstretch and Irad said he was full of horse the entire way around. We were kind of worried about the break and wanted to focus on her standing there. Her very first start at Saratoga, she stumbled. She has this tendency to want to break too fast. We make sure she stands right and gets a good start. They did a great job getting her out of the gate today. We were expecting a big performance but she exceeded our expectations with that one." 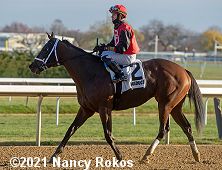 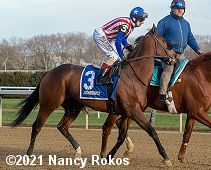 Left: Lady Rocket returns after the race. Winning jockey Irad Ortiz Jr. said, "She was nice today. She’s always tries hard. The mile was a question mark, but she handled it really well. I was waiting, biding my time. I just took it easy and tried to get her to relax up front and she relaxed. She waited for my call and that was the key. This was one of her best performances in her whole career."

Right: Second place finisher Bella Vita in the post parade. Jockey John Velazquez said, "She started to move around the turn, but obviously the winner was much the best today. My horse ran a good race and I'm happy with the way she did it." 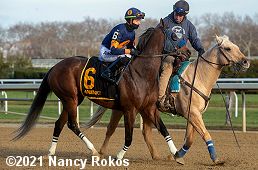 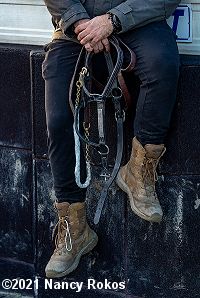 Left: Third place finisher Truth Hurts in the post parade. She improved her record to 4 wins, 1 second, and 2 thirds in 14 starts, earning $292,075 for owner-trainer Chad Summers and co-owner J Stables.