The last Grade 1 of the New York racing season is the $250,000 Cigar Mile Handicap (G1). This 1 mile trip around one turn of the Aqueduct main track for older horses often plays a role in deciding Eclipse Award champions in certain categories. Conditions were typical for late November, with overcast skies and temperatures in the mid 40's, and the main track sloppy after rain overnight and all morning. Performer was sent off as the 4-5 favorite in the field of 6 off his allowance win in October after a 10 month layoff. In to challenge him included 3-1 second choice King Guillermo, unraced since finishing 2nd in the Arkansas Derby (G1) after winning the Tampa Bay Derby (G2), and 4-1 third choice Mr. Buff, winner of the Empire Classic Handicap after finishing 5th in both the Suburban (G2) and Whitney (G1).

King Guillermo and Mr. Buff dueled for the lead out of the chute and down the backstretch through fractions of 22.89 and 45.82 while stalked by 7-1 fourth choice True Timber. Around the far True Timber, 4 wide the whole way, swept to the front through 3/4 in 1:11.09. Kept to task by Kendrick Carmouche, True Timber opened up by 4 lengths through 7f in 1:23.56, and continued to widen to finish 5 1/2 lengths ahead of late-running 13-1 Snapper Sinclair in 1:36.49. It was a neck back to favorite Performer third. 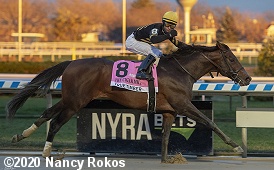 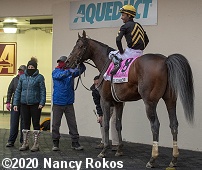 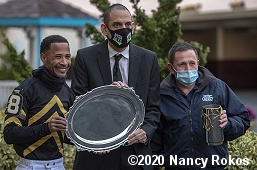 Left: True Timber in the winner's circle. Winning trainer Jack Sisterson said, "As soon as I got the horse, the Cigar Mile was a year-end goal. A lot of emphasis has to be put on how good a trainer Kiaran McLaughlin is. He had this horse before I did and had him sent him to me in such good shape. This really shows how good of a trainer he really is."

Right: Trainer Jack Sisterson (right) and jockey Kendrick Carmouce are presented with the trophy. Winning jockey Kendrick Carmouche, celebrating his first Grade 1 win said, "I owe it all to my fans, my wife and kids and how much they stuck with me and kept me pushing and fighting in this game. This means so much to me. This is the biggest win of my career and I hope I have many more blessed ones. Hard work and perseverance. You have to stay in the game and be ready for opportunity when opportunity comes. This is the point I'm at in my career right now, I'm ready for any opportunity and this is why I think things are going the right direction." 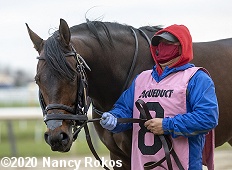 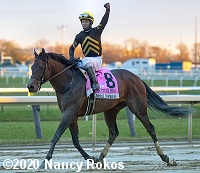 Left: True Timber walks over before the race. Sisterson added, "I think everything works out for a reason. He didn't get in the [Breeders Cup Dirt] Mile off the also-eligible list and the last race at Keeneland going seven-eighths was a great set up to run a one-turn turn mile at Aqueduct. We'll make sure he comes out of it in good shape and talk to the farm about what the future might be. Physically, he's beautiful to look at, and he's in great shape."

Right: True Timber returns after the race. Carmouche added, "I was very pleased with the draw we got and we had a couple scratches because of the sloppy track. I had perfect position leaving the gate and all the way around there. Right before we got to the quarter pole, I pulled the trigger and I knew they were going to have to run me down from here. It made my day. It made my year; 2020 has been a struggle but as long as God gives us faith and strength we can fight our way through it and find ourselves in the winner's circle." 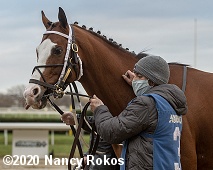 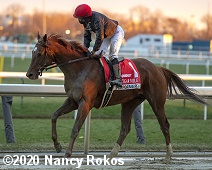 Left: Second place finisher Snapper Sinclair walks over before the race. Jockey Manny Franco said, "I was happy with the position that I got. The pace in front of me was quick and I just tried to give my horse a breather. When I made my move, he really responded for me. I knew the horse in front had a lot and would be hard to catch, but my horse ran a great race."

Right: Third place finisher and beaten favorite Performer returns after the race. Jockey Joel Rosario said, "He broke just OK and I was a little further back than I wanted. It took him a little time to handle the track. Sometimes when the track is wet it's hard to come from where he was. He made his run from the outside and seemed to be comfortable there. But it was tough to catch up with the leader."


The distaff counterpart of the Cigar Mile is the $100,000 Go For Wand Handicap (G3) for older fillies and mares over the one-turn mile. Nonna Madeline was sent off as the 6-5 favorite in the field of 6 off her 3rd place finish in the Turnback the Alarm Handicap (G3). In to challenge her included 5-4 second choice Sharp Starr, an allowance winner after finishing 7th in the Black-Eyed Susan (G2), and 15-2 third choice Portal Creek, making his stakes debut off 2 allowance wins at Parx.

Jockey Kendrick Carmouche sent Portal Creek to the lead exiting the chute through fractions of 23.26, 46.72, and 1:11.52 while pressed by Sharp Starr and stalked by Nonna Madeline. Turning for home, Portal Creek continued to lead through 7f in 1:23.99 but Sharp Starr, confidently handled by Jose Ortiz, closed the gap in the final furlong to get up by a neck in 1:36.75. It was a long 12 lengths back to favorite Nonna Madeline third. 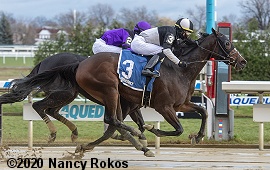 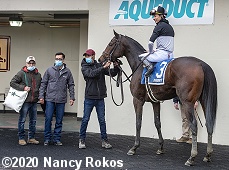 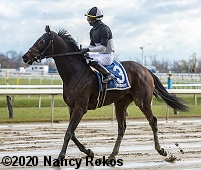 Left: Sharp Starr in the winner's circle. Winning trainer Horacio DePaz said, "She definitely likes the track, but I think she likes the one-turn mile a little bit better. Even in her two-turn races, she wants to put herself there, but she has those bad starts and afterwards she can't get up there. She's breaking so much better and getting herself into the race. The way she breaks and gets herself close, she's able to finish up nicely."

Right: Sharp Starr returns after the race. Winning jockey Jose Ortiz said, "They were running her two turns and she was breaking a little slow. Last time, when we brought her back to a one-turn mile, she broke well and that suited her better. They stuck with that racing style today. She broke sharp. She was there for me every time I asked her. Speed is good. On this sloppy track it can be hard to come from way off." 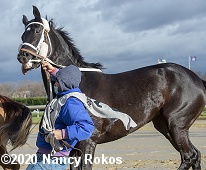 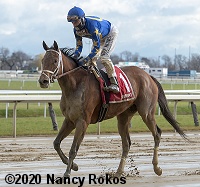 Left: Second place finisher Portal Creek walks over to the paddock. Jockey Kendrick Carmouche said, "The horse ran well. Coming from Parx, running on this track, he ran awesome. He made every pole a winning one but the final jump."


Kicking off the Saturday graded stakes quartet was the $150,000 Remsen Stakes (G2) featuring a field of 5 two-year-olds going 1 1/8 miles on the main track. It is also a points-scoring race with the winner earning 10 points in the Road to the Kentucky Derby. Ten for Ten was sent off as the 5-4 favorite off his 2nd place finish in the Nashua (G3). In to challenge him included 2-1 second choice Known Agenda, a maiden winner at second asking last out, and 3-1 third choice Pickin' Time, winner of the Smoke Glacken and the Nashua Stakes. Due to the short field show wagering was not available. 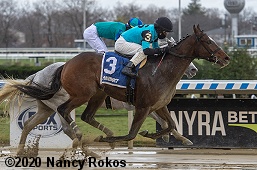 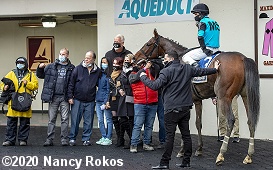 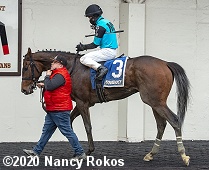 Left: Brooklyn Strong in the winner's circle. Winning trainer Daniel Velazquez said, "I was very confident going in. I knew the distance was key and I was confident about the off track. I was happy with his performance. He really dug in. Today was a big showcase for him against tougher competition and I couldn't be happier. It's tough. They (connections of Ten for Ten) paid a lot of money for him and we paid $5,000 (for Brooklyn Strong). You start to second guess yourself, but I knew he had the heart to grind it out. This is a big prep for the Derby moving forward. Now, we're definitely Derby dreaming."

Right: Brooklyn Strong in the paddock before the race. Winning jockey Joel Rosario said, "I broke well and it looked like they were running away from me a little bit, so I had to ride him to get position. I didn't want to let him fall back, so I rode him to stay within a couple of lengths. I was happy with how he was progressing and I was confident he was going to have something left for the end. He was responding to me and I didn't know how much horse I had, but I felt like we were moving very well. I was confident he would keep moving forward. I had to ride him a little bit." 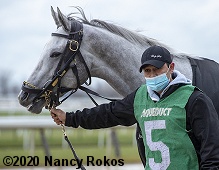 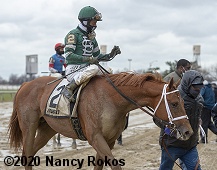 Left: Second place finisher and beaten favorite Ten for Ten walks over to the paddock. Jockey Jose Ortiz said, "He's a pretty fast horse and he looked to be the speed of the race. I let him break and encouraged him a little bit and he took the lead pretty easy and relaxed really well. He ran well to the wire. I think he will improve over the winter. He's on the trail for the Derby. He proved that he belonged and I think he's in a good spot. He already has four races." 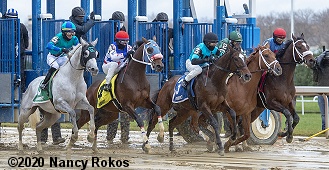 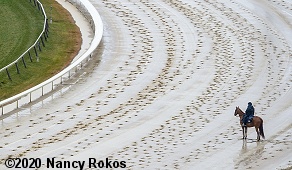 Left: The horses break from the gate for the Remsen.

Right: A lonely outrider on the sloppy track at Aqueduct on Cigar Mile day.


The $150,000 Demoiselle Stakes (G2) is for 2-year-old fillies also going 1 1/8 miles, and scores 10 points in the Road to the Kentucky Oaks. Malathaat was sent off as the 2-5 favorite in the field of 6, undefeated in 2 starts including the Tempted Stakes last out. In to challenge her included 3-1 second choice Millefeuille, a maiden winner at second asking at Belmont Park and 8-1 third choice Malibu Curl, a maiden winner at second asking at Saratoga.

Jockey Kendrick Carmouche sent 26-1 Traffic Lane to the lead around the clubhouse turn through fractions of 23.69 and 48.50 while pressed by Millefeuille and stalekd by Malibu Curl and Malathaat. On the far turn Traffic Lane tired allowing Millefeuille to inherit the lead through 3/4 in 1:13.33. In the stretch Millefeuille opened up a 3 length lead through 1 mile in 1:39.12, but Malathaat, 5 wide under John Velazquez, rallied to win by 3/4 length in 1:52.36. It was another 4 1/2 lengths back to Malibu Curl third. 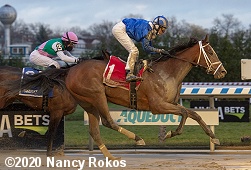 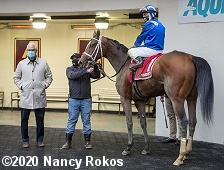 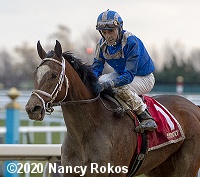 Left: Malathaat in the winner's circle. Winning trainer Todd Pletcher said, "She was on-and-off the bridle and a little bit green, still, and there was a little bit of traffic, but in the end, she found more and showed the quality filly that she is. She wasn't comfortable inside. I think she was unsure of the footing early on. She did it with her ears pricked, so in the end, it was impressive that she could do that. We felt like she's an Oaks-caliber filly and we'll take her down to Florida pretty soon and start preparing for that."

Right: Malathaat returns after the race. Winning jockey John Velazquez said, "Her class was what kept her going and got here there on time. She was never comfortable and not running into a spot I wanted. She never really put that much effort into keeping a spot. Finally, when I tipped her out heading to the quarter-pole, she started running. When I got her out, she put her ears up. Little by little, when she got to the other horses, she started going." 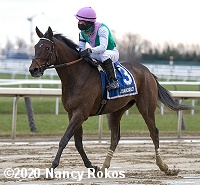 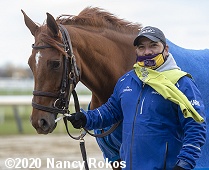 Left: Second place finisher Millefeuille returns after the race. Jockey Joel Rosario said, "She did everything right. She took the lead nice and easy. I went on and I thought I had the race won. The other horse put in a nice run in the end. She was looking around a little bit, I don't know that she was tired. It was a good race, the other horse put in a really good effort."

Right: Third place finisher Malibu Curl walks over before the race. The Tom Albertrani trainee improved her record to 1 win, 0 seconds, and 1 third in 3 starts, earning $58,032 for owner-breeder Woodslane Farm.