The last Grade 1 of the New York racing season is the $670,000 Cigar Mile Handicap (G1), traditionally run on the Saturday after Thanksgiving. This 1 mile trip around one turn of the Aqueduct main track often plays a role in deciding Eclipse Award champions in certain categories. Conditions were typical for late November, with light showers and temperatures in the mid 50's. Forego (G1) winner Private Zone was sent off as the 5-4 favorite in the field of 6 off his close second in the Breeders' Cup Sprint (G1). In to challenge him included 2-1 second choice Tonalist, winner of the Jockey Club Gold Cup (G1) before 5th in the Breeders' Cup Classic (G1), and 7-2 third choice Red Vine, third in the Breeders' Cup Dirt Mile (G1)
Jockey Martin Pedroza sent Private Zone to a clear lead exiting the chute and he set fractions of 24.15, 48.50, and 1:13.04 while as many as 3 lengths ahead of 7-1 Matrooh and Red Vine stalking him second and third. At the top of the lane Private Zone tired as Matrooh gained a short lead in midstretch. Tonalist, 5th early, came out 3 wide for room and outfinished Red Vine to win by a head in 1:37.14 over the fast main track. It was another neck back to Matrooh third, while favorite Private Zone faded to finish fifth. 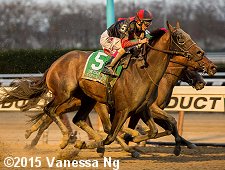 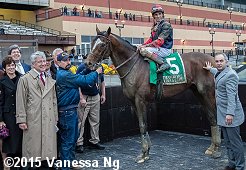 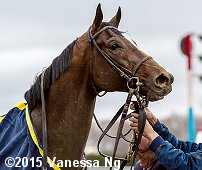 Left: Tonalist poses in the winner's circle. Winning trainer Christophe Clement said, "I'm always a little bit worried when I run him. The race was run in a funny way; they went so slow early on, which I didn't think was great for us. But that's what good horses do - they win and they overcome things. Great ride by Johnny. The way he finished when he leveled off was absolutely spectacular."

Right: Tonalist heads back to the barn after the race. Winning owner Robert Evans said, "I think we'll keep racing him, there's no reason not to. He's absolutely sound. He never has anything except Lasix. Why not? A lot of people think this game is about trading horses. It's actually about race horses." 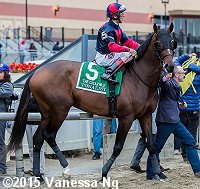 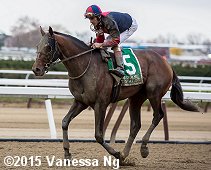 Left: Tonalist heads out for the post parade. Winning jockey John Velazquez said, "I got anxious a little bit when we passed the half-mile pole. We were going so slow on the backstretch and I could see (Private Zone) keep trying to get back, throwing his head up, and (Mshawish) seemed to be taking back. I was thinking that we were just walking with these horses here. I was close enough I didn't worry about it but when we got to the turn, they started to move away from me. I didn't want to shake him up too much and then not get him going, so I got him little by little, where he was comfortable. By the 5/16 pole, he started moving so I said OK, now he's moving. Another horse came to him by the 1/4 pole, I don't know who that was, and he got into the bridle and started running. My job was trying to put him in the clear, run him in the clear. When I got him clear and hit him, he responded right away. The last 1/16 mile was really good, very exciting."

Right: Tonalist returns after the race. 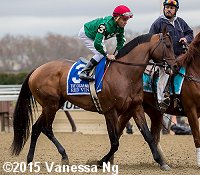 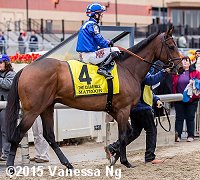 Left: Second place finisher Red Vine in the post parade. Trainer Christophe Clement said, "I'm a very lucky man (to train the first two). They both ran very well. Joel (Rosario) came back and said he was very unlucky. The fun thing for me, as a trainer, was having the two best horses in the race. No matter what, they're both going to have a break."

Right: Third place finisher Matrooh heads out to the track. The 7-1 shot pressed the pace under Irad Ortiz Jr. but finished third beaten just 1/2 a length. The Chad Brown trainee improved his record to 5 wins, 0 seconds, and 2 thirds in 12 starts, earning $320,091 for owner Shadwell Stable. 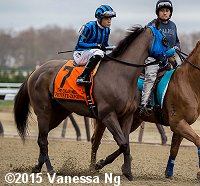 Fifth place finisher and beaten favorite Private Zone in the post parade. Jockey Martin Pedroza said, "I always get him out there. I do that to get him to relax. He's too fast a horse for his own good. I screamed at him a little bit. I saw horses coming close to me so I started getting after him. I reached for my stick. By the time I did, two or three horses go by, so I said, 'Forget it.'"


A field of 10 three-year-old fillies went to post in the $300,000 Comely Stakes (G3) at 1 1/8 miles on the main track. Carrumba was the 2-1 favorite off 3 straight allowance wins, over 3-1 second choice Wonder Gal, winner of the Empire Distaff Handicap, and 9-2 third choice Forever Unbridled, 5th in the Raven Run (G2). 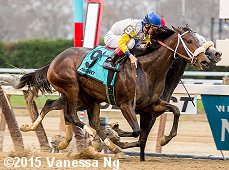 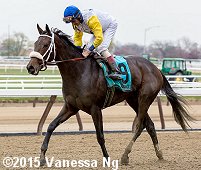 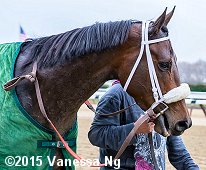 Left: Forever Unbridled returns after the race. Winning trainer Dallas Stewart said (by phone), "She has been a solid horse all year; ran second and third to I'm a Chatterbox a few times. We gave her a break after the [Kentucky] Oaks and she'd been training great. She came up there ready to run. There are a lot of Grade 1's next year and at Saratoga and I think she's capable if we handle it right."

Right: Forever Unbridled heads back to the barn. Winning jockey John Velazquez said, "I knew Carrumba is a fighter, so I was just waiting for the last second to get on her. I waited until the 3/16 pole to get on her and she put up a good fight. I just wanted to wait and then surprise her. If I went too quick by her, I knew she would come back and beat me, so I waited a little longer and then surprise her in the end. It worked out." 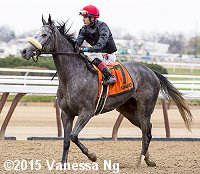 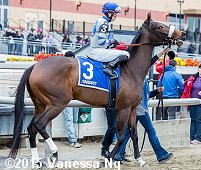 Left: Second place finisher and beaten favorite Carrumba returns after the race. The 2-1 choice pressed the pace under Jose Ortiz, challenged for the lead but just missed. The Shug McGaughey trainee improved her record to 3 wins and 3 seconds in 6 starts, earning $237,600 for owner-breeder Phipps Stable.

Right: Third place finisher Wonder Gal heads out for the post parade. The 3-1 second choice stalked the pace in third under Irad Ortiz Jr. but could not improve late finishing third beaten 7 1/2 lengths. The Leah Gyarmati trainee improved her record to 2 wins, 2 seconds and 4 thirds in 10 starts, earning $727,000 for owner Treadway Racing Stable.

Jockey John Velazquez sent 22-1 Donegal Moon to the front first time by and he set fractions of 24.35, 49.16, and 1:13.73 while pressed by Flexibility and stalked by Mohaymen. Entering the lane Donegal Moon tired as Mohaymen easily took over the lead through 1 mile in 1:38.43. Kept to task by jockey Junior Alvarado he drew off to win by 1 1/2 lengths over Flexibility in 1:50.69. It was another 1 1/2 lengths back to late-running Gift Box third. 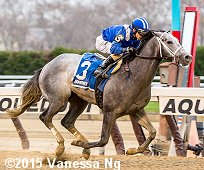 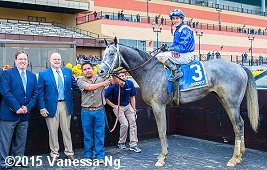 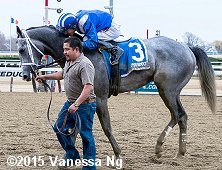 Left: Mohaymen in the winner's circle. Winning trainer Kiaran McLaughlin said, "We schooled him a lot at the gate after the way he acted last time. He had never shown anything like that at the gate when he reared up in there, so we did school him a bit coming up to this race and it worked out well. I was a little anxious when they were turning for home but it's great to win for Shadwell and I trained (dam) Justwhistledixie, so it's special to have this horse be this good."

Right: Mohaymen heads out for the post parade. Winning jockey Junior Alvarado said, "He broke good. He got outrun the first part and I didn't want to rush him too much; he can get a little tough. I did like last time, sat behind, just tried to wait. By the 1/4 pole, horses were starting to pick it up and I still had a lot of horse. I just tried to find my way and every time I pushed the button, he's there for me. He makes my job a lot easier." 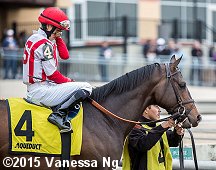 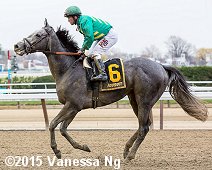 Left: Second place finisher Flexibility heads out for the post parade. Trainer Chad Brown said, "I thought both my horses (Flexibility and Gift Box) ran very respectable, and it's something to work with, with both horses getting around two turns. Let's see what happens movin g forward."

Right: Third place finisher Gift Box returns after the race. Trainer Chad Brown said, "The horse didn't look like he broke great, and he was a little slow to get into gear, and then he was behind a slow pace. Once he got out in the lane, he had every opportunity to run them down. I thought the winner was very good today."


Kicking off the Saturday stakes quartet was the distaff counterpart to the Remsen, the $300,000 Demoiselle Stakes (G2) for 2-year-old fillies also going 1 1/8 miles. Lewis Bay was sent off as the even-money choice in the field of 7 off a 6-length maiden romp, over 3-1 second choice Flora Dora, runner-up in the Tempted (G3), and 7-2 third choice Thrilled, 11th in the Breeders' Cup Juvenile Fillies Turf (G1). 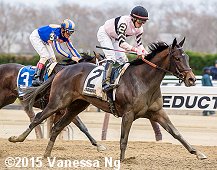 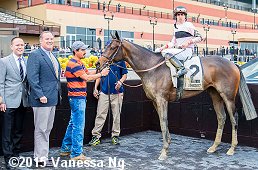 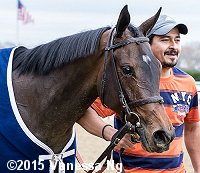 Left: Lewis Bay in the winner's circle. Winning trainer Chad Brown said, "I was concerned on the backside, when they were stacked up outside her, that she would never get out. Irad explained to me afterward he just eased his way back and around everyone. He was forced to go wider than he wanted to, but she really finished good. The last 1/16 mile, she lost her competition by being in front and out in the center of the track. He said she really lost focus, but was just being green. He said she's better with a target, but she passed the two-turn test, at least."

Right: Lewis Bay heads out for the post parade. Winning jockey Irad Ortiz Jr. said, "Turning for home I sent her out and she really went fast. When she got the lead she was a little green; I think she was waiting for company. She went out a few paths because she changed leads a little early but I felt I had a lot of horse, so I felt comfortable taking her wide. She was ready today and I don't think she showed everything she has because she was a little green, and when she felt somebody beside her she picked it up." 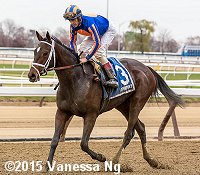 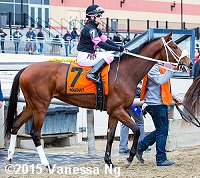 Left: Second place finisher Thrilled returns after the race. The 7-2 third choice pressed the pace under John Velazquez but could not keep up with the winner. The Todd Pletcher trainee improved her record to 1 win, 3 seconds, and 0 thirds in 5 starts earning $169,800 for owner Michael Tabor.

Right: Third place finisher Disco Rose heads out for the post parade. The 42-1 longest shot was 5th early about 2 lengths back under Maria Remedio, led on the far turn but faded to finish third beaten 2 3/4 lengths. The Robert Reid Jr. trainee improved her record to 1 win, 1 second, and 2 thirds in 7 starts, earning $122,840 for owner Glenn Bennett.