The last Grade 1 of the New York racing season is the $500,000 Cigar Mile Handicap (G1), traditionally run on the Saturday after Thanksgiving. This 1 mile trip around one turn of the Aqueduct main track often plays a role in deciding Eclipse Award champions in certain categories. Just 6,569 fans came out to the Ozone Park oval under cloudy skies and temperatures in the high 30's. Breeders' Cup Dirt Mile (G1) winner Goldencents was sent off as the lukewarm 3-1 favorite in the field of 10. In to challenge him included 7-2 second choice Verrazano, winner of the Haskell (G1) but fourth in the Breeders' Cup Dirt Mile last out, and 5-1 third choice Groupie Doll, winner of the Breeders' Cup Filly and Mare Sprint (G1).

Jockey Martin Pedroza sent 32-1 longest shot Private Zone to the front exiting the chute and he set fractions of 22.59, 45.39, and 1:09.79 while stalked by Goldencents and 6-1 fourth choice Clearly Now. Goldencents tired entering the stretch as Private Zone continued to lead to the 1/8 pole, but 7-1 fifth choice Flat Out, as far back as seventh early, passed him in the final furlong and drew off to win by 1 1/4 lengths in 1:34.68 over the fast track. It was another 2 lengths back to Verrazano third, while Goldencents checked in seventh. There was a stewards' inquiry involving contact between Private Zone, Verrazano, Groupie Doll, and Clearly Now at the 1/4 pole but the order of finish stood. 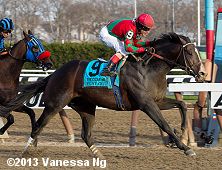 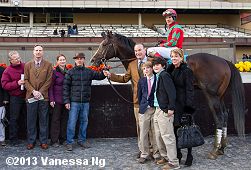 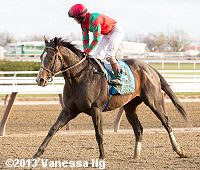 Left: Flat Out in the winner's circle. Winning owner Art Preston said, "We don't have a plan yet. Of course, we're considering retiring him because he's 7- ears old, but when they do this it makes you have second thoughts. You'd like to run him forever; we have to be realistic about him, he's 7 years old." Flat Out is the oldest Cigar Mile winner in the race's 25 year history. 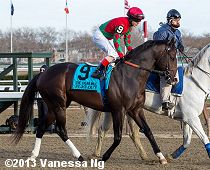 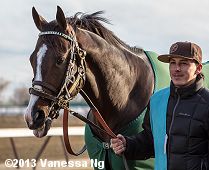 Left: Flat Out in the post parade. Winning trainer Bill Mott said, "I can't say enough about him, he's been a real tough durable horse. I always kind of felt that maybe he's as good at a flat mile as he is at 10 furlongs. He's won the Jockey Club Gold Cup twice at 10 furlongs, but versatile enough to get the job done going a mile. Very nice horse." Jockey Junior Alvarado added, "For him, I think it was the dream trip - outside, clear, nothing bothering him. The speed was going very fast in front. When I asked him, he definitely gave me all he had."

Right: Flat Out comes over from the barns before the race. 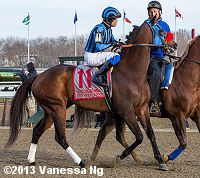 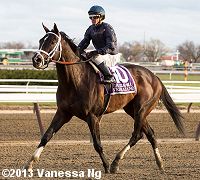 Left: Second place finisher Private Zone in the post parade. Jockey Martin Pedroza said, "He ran a brilliant race, there was no doubt about it. I give all the credit to (co-owner) Rene Douglas; he wanted to run in this race. He was right; this horse can go the distance. I think he can go two turns. He never stopped."

Right: Third place finisher Verrazano returns after the race. Trainer Todd Pletcher said, "I thought Verrazano ran well. It was obviously a very tough race with a lot of experienced veterans, so I thought he ran well." 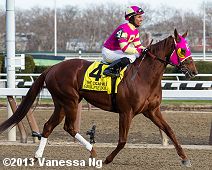 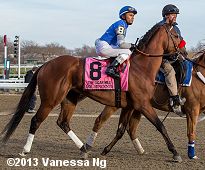 Left: Fourth place finisher Groupie Doll in the post parade. Trainer Buff Bradley said, "Rajiv (Maragh) had some problems on the backside going into the turn. You can't alter course like that on this track. We took a shot. Mandy (Pope, owner) did a great job bringing her up here. That's why they load them in the gate. You have a good horse, you have to run, you have to see."

Right: Seventh place finisher and beaten favorite Goldencents in the post parade. His trainer Doug O'Neill said, "Disappointing. We've got to try to dissect Goldencents' performance. It was one of those deals where the 5-2 (Goldencents) runs like a 30-1 shot and the 30-1 (runner-up Private Zone, which he also trains) runs like a 5-2 shot. Just a head scratcher, but we'll regroup. We'll go over them good and figure out a game plan."


Immediately before the Cigar Mile, a field of 9 three-year-old fillies went to post in the $400,000 Comely Stakes (G3) at 1 1/8 miles on the main track. Wedding Toast, winner of three straight including the Belle Cherie last out, was sent off as the 7-10 favorite over 7-2 My Happy Face, fourth in the Cotillion (G1) after finishing third in the Test (G1), and 12-1 Marathon Lady, off her fourth place finish in the Remington Park Oaks after finishing third in the Coaching Club American Oaks (G1). 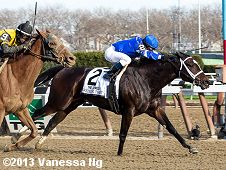 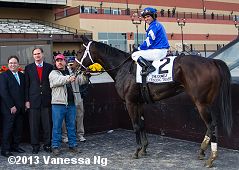 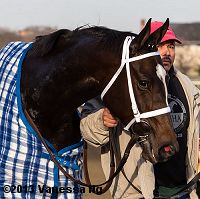 Left: Wedding Toast in the winner's circle. Winning trainer Kiaran McLaughlin said, "She sometimes doesn't break so well, but today she broke well and Javier put her on the lead. She was very game. It looked like the other filly was going to go right by her, but she dug in and showed a lot of gameness. We won a tough photo. She's a very nice filly. We'll discuss plans for her."

Right: Wedding Toast heads back to the barn. Winning jockey Javier Castellano said, "I'm really proud of the way she did it today. I put her on the lead and she fought all the way. At the top of the stretch it looked like Toasting was going to go by, but she kept fighting. She didn't want to get beat today." 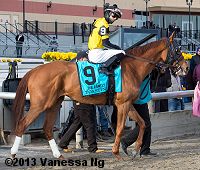 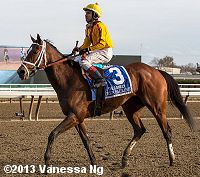 Left: Second place finisher Toasting heads out to the track before the race. Her trainer Tom Albertrani said, "She ran well. She fought the whole way. We got hung a little wide and that might have made a difference, but the winner ran gamely and kept trying to fight us off." Jockey Jose Ortiz added, "I tried to ride her the way I did last time. She's a nice filly, but (Wedding Toast) is a nice filly, too."

Right: Third place finisher Teen Pauline returns after the race. The 15-1 shot stalked the pace in fourth early under jockey Rafael Bejarano, then held on to finish third beaten 5 1/4 lentghs. The Todd Pletcher trainee improved her record to 2 wins, 1 second, and 3 thirds in 8 starts, earning $143,300 for owner-breeder Stonestreet Stables.


The $400,000 Remsen Stakes (G2), celebrating its 100th running this year, featured a field of 8 two-year-olds going 1 1/8 miles on the main track. Champagne Stakes (G1) runner-up Honor Code was sent off as the 4-5 favorite over 8-5 second chice Cairo Prince, undefeated in 2 starts including the Nashua (G2), and 10-1 third choice Intense Holiday, fourth in the Nashua last out.

Jockey Jose Lezcano sent 33-1 Master Lightning to the lead on the clubhouse turn and he set slow fractions of 25.84, 52.74, and 1:17.56 while pressed by Honor Code and Cairo Prince. At the top of the stretch, Master Lightning tired as Cairo Prince gained a short lead at the 1/8 pole through 1 mile in 1:41.13. Honor Code gained steadily on the rail through the final furlong and outfinished Cairo Prince by a nose in 1:52.92. It was another 1/2 length back to 11-1 fourth choice Wicked Strong third. 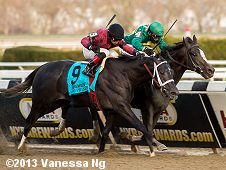 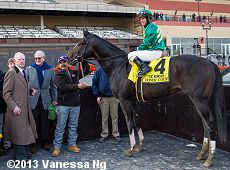 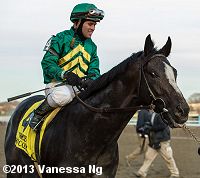 Left: Honor Code in the winner's circle. Winning jockey Javier Castellano said, "The way he ran the first part, he showed me more speed and was more comfortable and relaxed. I felt the pace was slow. The opportunity was there; I took it. I know he's a come-from-behind horse but the pace was slow. I didn't want to fight him. I think Cairo Prince tried to make the strong, sweeping move and tried to get the jump. My horse is a big, long-striding horse and he anticipated it a little bit. He found a second gear and he came back."

Right: Honor Code returns after the race. Winning trainer Shug McGaughey said, "He got down on the inside of (Cairo Prince) and he got by him. He showed a lot of guts. I'm proud of him. I think the horse in second is a nice horse, and it was a peculiar race. We'll give him a little time and take him to Payson. He's going to run (Triple Crown distances), we just have to figure out how he wants to do it." 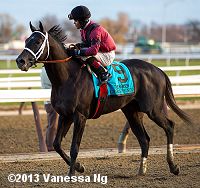 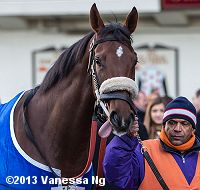 Left: Second place finisher Cairo Prince returns after the race. Trainer Kiaran McLaughlin said, "That was a tough beat. The winner is a good horse, but that was a tough one. I thought we had it won." Jockey Luis Saez added, "When he made the lead, he tried to wait on the other horse. (In the Nashua), he took the lead and opened up five, then stopped a little bit. Today he was doing the same. The other horse, he beat me on the wire."

Right: Third place finisher Wicked Strong in the paddock before the race. Trainer Jimmy Jerkens said, "Anytime they finish strong, it's good. With the slow pace, everyone was in the same boat. He had a nice ground-saving trip."


Kicking off the stakes action on Cigar Mile day was the $250,000 Demoiselle Stakes (G2) for 2-year-old fillies going 1 1/8 miles. Just 6 went to post on Saturday with Stopchargingmaria sent off as the 9-10 favorite off her 10 length romp in the Tempted Stakes (G3). In to challenge her included 5-2 second choice America, a maiden winner in her second try last out, and 3-1 third choice Got Lucky off a second place finish in her debut.

9-1 Penwith was sent to the front by jockey Luis Saez and she set slow fractions of 25.38, 50.65, and 1:15.45 while stalked by Stopchargingmaria. Entering the stretch, jockey Javier Castellano asked Stopchargingmaria to close and she did, taking over at the 1/8 pole through a mile in 1:39.93, and outfinishing late-running Got Lucky by a neck in 1:52.62. It was just a head back to Penwith third. 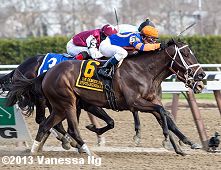 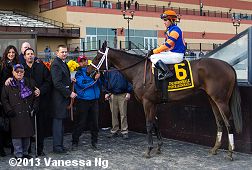 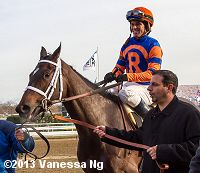 Left: Stopchargingmaria in the winner's circle. Winning trainer Todd Pletcher said, The thing I thought she had going for her is a good foundation and the fact that she has a good mind. She's very ratable. She's kind. She's not the kind you have to worry about getting too headstrong, but it's a mile and an eighth, and it's a long way for 2-year-old fillies."

Right: Winning owner Mike Repole leads Stopchargingmaria. Repole said, "It's nice winning this race back-to-back years. To win it with Unlimited Budget and now with Stopchargingmaria, it's fun. She was so close to being a Grade 1 horse. We put her in Grade 3 company last time and she won impressively. Today, she had an advantage with four races under her belt as opposed to some of them who had run once or twice. I didn't know if she would get this distance, but if she ever was going to win at 1 1/8 miles, today was the day." 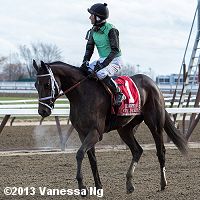 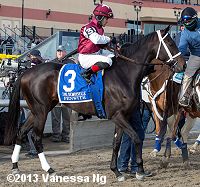 Left: Second place finisher Got Lucky returns after the race. Jockey Mike Smith said, "There's a lot of upside to her, which is a good thing. There's a lot of room to grow. Second time out, in tight; it was a little scary in there. Then, she saw the camera people at the wire from a distance. With a little improvement, I think she beats them."

Right: Third place finisher Penwith heads out to the track before the race. Trainer Kiaran McLaughlin said, "She ran great, unlucky to run so hard and finish third. She didn't have any quit in her. We're happy and disappointed, but she ran really well having just broken her maiden."