The $300,000 Hill 'N' Dale Cigar Mile Handicap (G1) is the last Grade 1 race of the New York racing season. A field of 9 older horses went 1 mile around 1 turn of the Aqueduct main track on Saturday afternoon, with Monterey Jazz sent off as the slight 3-1 favorite over 5-1 Arson Squad and 6-1 Wanderin Boy.

As expected, jockey David Flores sent Monterey Jazz to the lead immediately, and he set an uncontested pace of 22.87, 45.31, and 1:09.42 over the fast main track while as many as 2 lengths in front of 7-1 Storm Play who stalked him in second. Turning for home, Monterey Jazz tired badly to finish seventh. 10-1 Harlem Rocker, who was unhurried in 6th early, came out wide to pass tiring horses into the lane and quickly opened up a 2 length lead in mid-stretch. 9-1 Tale of Ekati, who stalked the pace in third saving ground around the turn, put in a strong rally of his own, but at the 1/8 pole Harlem Rocker lugged in and interfered with Tale of Ekati, who had to alter course. Harlem Rocker finished first by a nose in 1:35.01 over Tale of Ekati, and it was another 3/4 length back to late-running 8-1 Bribon third. The stewards disqualified Harlem Rocker and placed him second behind official winner Tale of Ekati.

Winning trainer Barclay Tagg said, "The longer the inquiry goes, they usually don't change it. I could see it happening; (Harlem Rocker) took the lane away from us. Sometimes it happens for me, sometimes it happens for them. The (1 1/8 mile) Wood Memorial came up perfect for him, but I've said all along that this horse is a miler. But when you have a three-year-old with the Kentucky Derby, you have to try different things with them. They are only three years old once. He didn't shame himself in the Kentucky Derby (fourth). It's nice to start the year with a Grade 1 at Aqueduct and end it here with a Grade 1." Jockey Edgar Prado added, "That little check cost me a little momentum at the end. He only beat him by a nose. I think the stewards made the right decision."

Todd Pletcher, trainer of Harlem Rocker said, "(Tale of Ekati) didn't appear to really check and he had every opportunity to go by our horse. And, in my opinion, he was never going by. It's a tough call in a Grade 1. I'll talk to (owner Frank Stronach) and see if he wants to appeal the ruling." 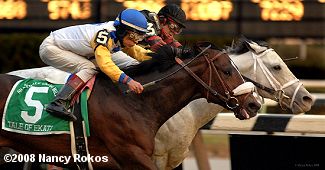 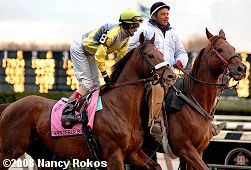 The race was marred by the breakdown of Wanderin Boy, shown here in the post parade, who raced third down the backstretch in contention but was pulled up on the turn by jockey John Velazquez and vanned off. It was found that he had fractured the sesamoids in his left front leg and he had to be euthanized. The Cigar Mile was his 24th career start and was scheduled to be his last. Trainer Nick Zito said, "The thing that is hard to swallow is that everyone was raving about how good he was doing. He just took a bad step. This is very sad for me. It's very hard. We monitor every single thing with all our horses. If we see something, we won't run. And no one saw anything coming with this guy.  I have run thousands of horses in my career and I have not had many of these things happen. But that doesn't make this any easier. I'm going to miss him."